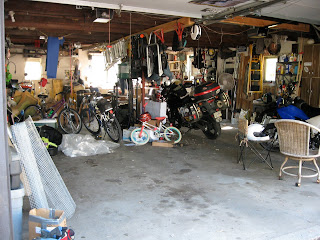 Last winter, too many things happened at once and I missed the moment; the garage cleaning moment. Since then, nothing has gone right in my favorite room of the house. Work stuff, personal stuff, family stuff, hoarding tendencies, and general laziness kept me from performing a ritual that has kept my life semi-ordered for decades; scrubbing the garage before winter. Once I missed that window, everything has gone downhill. Finally, this weekend, I have no MSF classes to teach (looks like the rest of the summer's schedule might cancel out on me) and no freelance deadlines to meet. So, I'm out of excuses.

The problem is I've lived here too long. My natural hoarding instincts are overwhelming my disciplined mid-tech transient practicality. All of my life, I've moved every 2-5 years. Before moving into my current home, the longest I'd ever lived anywhere was the 7 years my family lived in a dinky Huntington Beach apartment. Since I was working 80-90 hour weeks, going to school nights and weekends, and managing two small businesses during that period, it's hard for me to consider the actual time spent in that California beach apartment as being more than a blip in my life. But I've lived in my current home for 14 years and the collected crap is starting to become overwhelming. My wife collects girl-stuff and most of the house is crammed with that crap. I collect guy stuff and the garage and my basement shop and the attic studio are stuffed with that crap. In the garage, I have squirreled away parts for all of the cars and motorcycles I've owned in the last decade, service manuals for the same vehicles, tools for a wood shop, toys and kid-projects that my grandson started and gave up on, acetylene welding stuff, bicycles and assorted maintenance bits for bikes, an idiotic collection of electronic components for audio products I will probably never design, mountains of acoustic treatment materials for recording studios I will probably never build, construction materials that may (or may not) end up being used on the house, and dozens of yard and gardening tools for a yard that could suck up my whole life.

It's a really big garage, but it can shrink up dramatically if I can't find the guts to toss out the stuff I will never get around to using. When I bought the house, the previous owner had stuffed the garage front-to-back and eight feet high with all sorts of crap. He had a tunnel carved in the junk to allow access to his huge television dish antenna. Most of the residue of his existence is gone from the garage now.

I used to love moving because moving forced me to make those kinds of decisions. I don't mess around when I move, either. In the last four decades, I've moved from Kansas to south Texas to Kansas to west Texas (again) to Nebraska to California to Indiana to Colorado to Minnesota. My moving motto is "when in doubt, throw it out." I don't, however, apply that philosophy to cleaning up my crap-filled garage. I use more of a "when in doubt, stuff it in the rafters" policy. The rafters are about to collapse and crush me flat. Some decisions will have to be made.

The first things to go are the kid stuff. My grandson has progressed from a sweet, energetic, fun little guy who used to direct me in building everything from robots to rockets to the usual sort of sullen teenager who is pissed off at everything I do. That makes emptying out the unfinished kid projects an easy assignment. I set the kid stuff on the curb with a "FREE!" sign and it all vanished in a few hours. It's not like I'd ever mess with model rockets or stop-motion animation on my own time and having that rocket stuff in the garage is a fire hazard.

Next goes the unfinished construction project materials. I will probably never roof a house, so all the scrap roofing materials hits the curb and instantly vanishes. I'm not adding a door to another room in this house, so the interior door that's been sitting in the rafters since we bought this house hits the curb and disappears. Likewise, the louvered closet doors, the baseboard electric heating elements, and the unused wall-to-wall carpeting left by the previous owner. All set out on the curb and all claimed in less than an hour. I'm on a roll.

Electronic parts and project cases hit the trash. I disassembled my wooden saw horses and chopped them up for materials. I have cool folding metal ones and don't ever use the old style horsies. Flammable construction materials practically fling themselves into the burn box for the wood stove. I can almost see my metal work bench and the wooden bench has been cleared since morning.

As I toss crap, I inventory the non-crap possessions and put them up on Craig's List and eBay while I organize. By 5PM Saturday, I've sold almost $200 worth of idle crap. I also have the Kawasaki Sherpa up on the jack ready to strip down to the frame and rebuild with the original stock parts. By Sunday night, the KL250 will also be on Craig's List. Once, I'd thought Wolfe and I would be doing some off-road riding together this summer, but he's made it clear that isn't in the works so I'm clearing the garage space for something useful (or just for the luxury of free space). I can always find another dirt bike if it turns out I need one. That's another transient motto of mine, "if I ever need it again, I can buy it again." Two spare helmets are on Craig's List and so is the cruise control I never installed on the V-Strom because I couldn't convince myself I could tolerate the control's added clutter under the tank.

While I'm tossing stuff and selling stuff, I'm fixing stuff, too. That's why cleaning the garage takes so long. If I find a repair part I've been looking for, I stop cleaning and do the repair so I won't lose the part again. Tomorrow, I'm installing the throttle for the electric scooter and, if it works, that damn thing hits Craig's List, too. Another dumb idea that got a lot of playtime, initially, and ended up taking up space afterwards.

Ten hours later, the garage is clean and civilized. Both work tables are clear, the work area is wide open, the kid stuff gone, a giant curb-load of stuff has been claimed by the neighborhood collectors, and a bunch of boxes are going to be part of our Fourth of July celebration as starter material in the fire pit.  Mission accomplished. Now I'm afraid to start anything in the garage because I'll mess up my new order.
Posted by T.W. Day at Monday, July 04, 2011