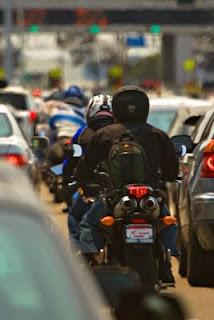 Steve Guiderian has published a study, "LANE SHARING: A GLOBAL SOLUTION FOR MOTORCYCLE SAFETY, which compares the safety record of the only state in the US that allows traffic filtering and lane sharing with the abysmal record of the rest of the country. This is, as far as I know, the only study that uses data instead of emotion and speculation to look at the safety of this traffic management tactic. His conclusions found that "California does have a lower rate of fatal rear-end motorcycle crashes when compared to other similar motorcycling states. This figure also shows that the rate of fatal rear-end collisions in California is also lower than the national rate, which includes many states with a limited riding season and fewer motorcycle riders." Guiderian also found that "California has fewer motorcycle deaths involving a motorcycle rearending another vehicle, and significantly fewer deaths from a motorcycle being rear-ended by another vehicle."

One aspect of lane sharing that Guiderian does not address is the fact that lane sharing increases the viability of motorcycle commuting, which would increase the visibility of motorcycles in typical traffic which could also result in an improved motorcycling safety record. If you have ridden in California, you know there is no downside to lane sharing. Superstition, fear of the unknown, and conservative timidity is all that prevents all 50 states from allowing lane sharing. Claiming safety as one of the restraints is unbelievable.
Posted by T.W. Day at Monday, July 25, 2011