This trip was all about Wolf. The whole point was to take him on a tour of places he'd never been and to enjoy being with him on the ride. So, there wasn't much of a trip report accompanying this adventure. 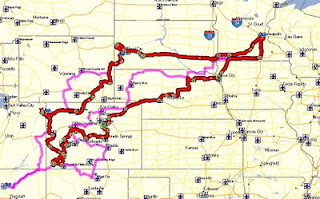 The map (at right) describes two routes: the one we planned (purple) and the one we took (red). Garmin's Mapquest software says we travelled 3400 miles. My GPS and odometer put the trip at closer to 3600 miles. Our original route was 4100 miles and included New Mexico and Arizona.

Obviously, we bypassed some of the adventure we'd planned; in favor of ease and comfort. Wolfe is a Minnesota kid and he isn't fond of heat. After a few days of cooking in 100+F South Dakota, Wyoming, Colorado, and Utah heat, he decided he wasn't all that interested in the Grand Canyon. So, that changed the western edge of our route. Once we passed Grand Junction, CO, I decided I wanted to see more of the western edge of CO. That was a terrific move.

We took a couple of days at Mesa Verde and Durango, which meant we wouldn't be doing New Mexico. That allowed us to head for Marble, CO via the scenic route I've never looped the Black Canyon and that was more than worth the effort. We spent a half day in Marble, another good move. We took Independence Pass through Aspen on our way to Buena Vista, something I've never been able to do; mostly because the pass always seemed to be closed when I lived in CO. That was a great move. We blew almost a whole day in Buena Vista, rafting the Arkansas. We split Buena Vista mid-afternoon, early enough to ride to the top of Pikes Peak. Always a great move.

We loafed for two days in Manitou Springs and Denver. Wolf had dinner at South Park's infamous Casa Bonita. We split Denver late afternoon Friday in the middle of Denver's rush hour and made it a dinky 150 miles to Sterling for the night. The next day, we cut out of Sterling at 5AM and diagonal'd Nebraska to make good time while seeing the sandhills, the grasslands, and Ashfall Fossil Park. After that, we just hammered out a way home, 850 miles total on Saturday.

We made it back about 10:30PM and neither of us went straight to bed. We had a great, safe trip and it was one of the most fun mini-adventures of my life. I hope we get to do a few more of these.
Posted by T.W. Day at Friday, July 30, 2010