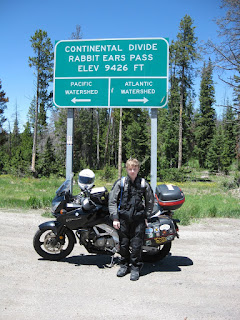 The fine folks at Frontier Cycle whipped out a pair of fork seal replacements in an hour and a half and got us on the road by 10:30AM today. A few hours later, we crossed the great continental divide at Rabbit Ear Pass.

It's been a while since I've experienced new fork seals. At first, I thought I'd told Frontier to use the wrong fork oil. I've been using 15W on the V-Strom since I brought it home, but I was feeling every ripple in the road for the first 50 miles. Slowly, the ride smoothed out and the forks went back to sucking up the road irregularities.

We made up for a short day yesterday by being mostly bored with Steamboat Springs. I remember Steamboat as being a cool, but small, skiing village. It has turned into a noisy, tourist hell with a massive dose of boring yuppie condos and glass and redwood Texas whorehouses. Wolfe and I took the ski lift for old times sakes, but neither of us had much interest in shopping or being mobbed by people who were shopping. We moved on toward Dinosaur National Monument. We made it to Dinosaur, CO and discovered that the real entrance to the park is in Utah. We'd covered almost 350 miles since we left Laramie and we were cooked, almost literally. Copped out again and snagged a motel for the air conditioning.

Wolfe is getting into the bike check routine. It's his job while I fill the tank and pay for the gas. We're using repetition of the T-CLOCS MSF routine with a little more detail on the loose bolts and rattled loose bits.
Posted by T.W. Day at Thursday, July 15, 2010