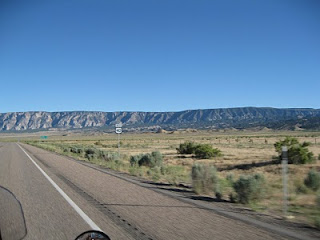 We made it through Steamboat, a village that has turned into a seriously ugly city in the mountains, kept going almost all the way to Utah before the heat got to Wolfe. We quit about 5 miles short of Dinosaur National Park. The next morning, we arrived in Utah and Dinosaur National Park. The park turned out to be a serious disappointment. The wall of dinosaurs has been closed for viewing for more than 3 years. All that is left is a short walk led by a ranger and a campground. The campground was nice, but not worth 100 miles of desert.

Next morning, we headed south on Colorado 139. South on the west edge of Colorado is desert. At Grand Junction, it was 104F deserty. While we were filling out a gear shortage at a sporting goods shop, a guy driving a truck decorated with "Bob McConnell for Congress" door panels.
"You came all the way from Minnesota on that?"
"Yep."
"You got some great politicians in Minnesota."
I waited to hear who we had that was great.
"Tim Pawlenty and Michelle Bachman. Great people."
I sorta hoped that he meant Jesse, but I should have known better for the deserts of Colorado. I don't know if that guy was Bob McConnell, but he looked like a less macho, younger version of the face on a Bob McConnell poster I saw on the way out of town. Could be they clone wingnuts out here.
We found our stuff and hit the road again. Grand Junction didn't do much for me, either.
After Dinosaur National and Grand Junction, Wolfe was more convinced than ever that there was nothing for him in the arid zones. I'd really wanted to see the infinity bridge at the Grand Canyon, but Wolfe is boss on this trip. So, we kept going south, now on Colorado 141 which is one of the most scenic desert rides I've ever experienced. Just past Nucia, I put in an easterly deviation, via Colorado 145, toward Telluride to find a cooler camp ground. Found a great campsite about 5 miles south of Telluride on 145. 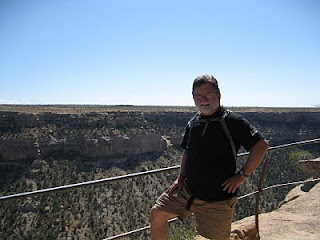 We rolled into Mesa Verde National Park at 8:30AM and I got a terrific birthday present from the National Parks System: a $10 lifetime pass to all national parks and monuments and a 50% discount on camping at all national campsites. Unlike Dinosaur National Monument, Mesa Verde did not disappoint. We saw most of it and cut out when the temperature beat 100F.
We didn't go far. We're in Durango now, blowing a night, waiting to take the train to Silverton tomorrow. Afterwards, we're gong north for a cheap night at a national campground and on to Colorado's charms and anomalies.
Posted by T.W. Day at Sunday, July 18, 2010

Joe & I just returned on our bikes from Co Springs. Pikes Peak riding is not to be missed.
I was out there starting my Doctoral program. The ride from MN to Co is dreadful, though...

Yeah - the right wingers are rampant out there - I think its all the military. I dunno, but I found that aspect of it kinda frightening...

The desert sure looks pretty and all, but whenever I read about someone's actual trip it sounds like pure hell on earth. I know, it's a dry heat, but still there's an awful lot of it. I suppose I should visit to just see it all, but is it worth it?

Too true. The desert is sometimes beautiful, but it is a dry, hot, uncomfortable, and incredibly large sort of beautiful. The fact is, no other place on earth has this topology, these plants, these rock formations, or these roads. If you want to see them, you have to put up with the desert. This was my grandson's first long trip, of any sort, and I didn't want to make it unnecessarily painful. He toughened up, though, and ended up enjoying several hundred miles of desert in a run.

Good ride report. I did some of those same roads last year, but in late May. It wasn't quite so hot. I liked the scenery around Durango. I also found grand junction a waste and rode through it.