BMW appears to be infatuated with the company's concept bike, the K 1600 GT and the K 1600 GTL. The 160 bhp compact in-line six-cylinder engine, features ride-by-wire fuel-injection and traction control, Duolever and Paralever suspension with Electronic Suspension Adjustment, a TFT displayed control console feature GPS, an audio system, Bluetooth, and an iPod interface, and lots of customization options. So far, the model is still in the concept stage, but BMW is committed to producing this luxury motorcycle in the very near future.

Cruising for Ducati
Tom Cruise prominently rode a Ducati Hypermotard in his most recent movie, "Knight and Day." However, when he demonstrated his motorcycle abilities for publicity photos he chose to pose on a lighter Aprilia SXV. I wonder how Ducati felt about Cruise shilling for a competitor's product after they spent so much money product-placing their brand in Cruise's movie? Maybe they are happy it was a box office bust.

Looking Under Motorcyclist's Skirt
Motorcyclist Magazine's readers got an interesting look at the inner workings of a major motorcycle magazine this month. As a result of Dexter Ford's reporting of motorcycle helmet testing standards in a New York Times article, he was fired as a staff writer for Motorcyclist Magazine. After editor Brian Catterson commented on the reasons for Ford's termination, Ford apparently fired back by releasing the text of email conversations between himself and Catterson: http://www.mc24.no/getfile.php/Innhold/Bransje/DFemail-2.pdf.

Many readers were upset to learn that equipment manufacturers were able to wield so much editorial clout in a major magazine. That portion of the story revolved around helmet manufacturers, Arai and Shoei, pulling advertising because of the criticism Ford made of Snell standards. If an major magazine is afraid to criticize flawed safety standards, why should readers trust their product reviews?

The World Considers Motorcycling's Future
This year's EuroScience Open Forum (ESOF) discussion featured a discussion titled "MYMOSA: The pros and cons of motorcycles." MYMOSA stands for "MotorcYcle and MOtorcyclist SAfety," a European Union research project that evaluated motorcycle efficiency, environmental concerns, and safety compared to other vehicles. MYMOSA was relatively motorcycle friendly, but the discussion was often not so sociable.

"I actually wonder why you are saying that the motorcycle industry is going to help with sustainability," said Christian Siegmund, an engineer and panel participant. "Those companies have shown no motivation to reduce emissions or noise... And the way they market them encourages people to drive in a way that is not at all fuel efficient. . .

"I came to this session because I'm a motorcycle enthusiast. But the motorcycle is not the answer for sustainability. They are dangerous and inconvenient to use on a daily basis. They should be talking about improving public transportation if sustainability is the goal."

Industry representatives appeared to be unprepared to respond to comments like this.

Why Did the Bear Cross the Road?
To meet motorcyclists, why else? A bear crossing a New Jersy highway met a motorcyclist, up close. The motorcyclist was treated for minor injuries and the bear returned to the woods to convalesce. 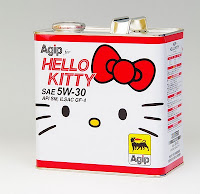 For $33/liter, you can lube your car with Agip Hello Kitty SAE 5W-30 synthetic. Why just for cars, motorcycle are cuter than cars?

Motorcycles and Bicycles Mix Catastrophically
Lance Armstrong and dozens of Tour de France competitors crashed after an earlier motorcycle crash had left oil on the road, which mixed with water creating a disaster for the bicyclists. Armstrong finished the race with a road-rashed thigh and an elbow injury. France's Sylvain Chavanel was one of the few riders to escape the mass spill and, although he began the stage in 87th place, took top place in the 125-mile stage and reorganized the positions of the race's leaders as a result. Two Americans and a New Zealander were briefly hospitalized for injuries.
Posted by T.W. Day at Tuesday, August 03, 2010

Email ThisBlogThis!Share to TwitterShare to FacebookShare to Pinterest
Labels: all the news that didn't fit, minnesota motorcycle monthly, motorcycles