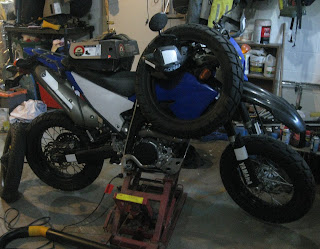 Last winter, when some friends helped me wedge my WR through the garage door into the basement shop, I had high hopes for this spring. In January, I wrote “For the first time since I left California in 1991, I have a warm, well-lit indoor space to work on my bike for the rest of the winter. This will be the most fun spring motorcycle prep in decades.”

Within a month, I began to experience double-vision problems that turned anything that requires vision into headache-inducing misery. The bike is still on the jackstand, exactly where I put it in January; untouched, except for being rolled around to get the shop-vac to all of the basement flooding we “enjoyed” this spring. The double-vision is an early symptom of myasthenia gravis,as Wikipedia puts it, “a long-term neuromuscular disease that leads to varying degrees of skeletal muscle weakness. The most commonly affected muscles are those of the eyes, face, and swallowing.” My father suffered from this disease in the last two decades of his life and it isn’t pretty. This isn’t just the end of my motorcycling life, but driving a cage, bicycling, walking, eating, drinking, and breathing are all up for grabs.

My eyes have never been anything special, as anyone who saw me on a motocross track could attest. I have been legally blind in my left eye since childhood and my right eye has been going far-sighted for more than a decade and both eyes are clouded by cataracts. You don’t know what you’ve got till it’s gone, though. Two mediocre eyes are better than one. Stereoscopic vision and binocular depth perception is greatly undervalued until you don’t have it. I can’t even reliably reach for a glass of water and expect a predictable result. I wear an eye patch most of the time, which mostly reinforces my low opinion of my crappy right eye. 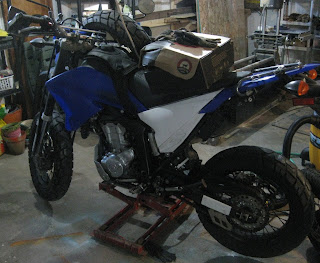 A long-time rule of mine has been “when in doubt, throw it out.” I applied that rule, last spring, to my trusty 2004 V-Strom and sold it to someone who would use it as much and as seriously as I did. Off and on that summer, I missed the 650 and, occasionally, wished I still had it, but mostly I wished I wasn’t 70, worn-out, and lame. By June, 2018 I decided I had taught my last MSF class and “retired” from the Minnesota program. I had pipe-dreams of doing adventures on the WR, though: going places I would no longer have the gumption to take a bike as large and heavy as the V-Strom. Clearly, that isn’t in the cards.

What prompted this was my motorcycle insurance premium notice and 2019 ID cards just arrived in the mail. For the first time in 50-some years, I am not going to be putting out a few hundred dollars to insure my motorcycle(s). For the time being, I will put that envelope aside, on the desk, hoping that something changes and I get another year of riding; by some miracle. I am waffling, but I need to take the bike out of the garage, do some of the basic maintenance tasks to get the bike ready to sell, and write up an ad. But, for now, I’m going for a bicycle ride while I still can.
Posted by T.W. Day at Monday, June 24, 2019