The End of an Era

I put my V-Strom on Craig’s List today, after doing a pre-sale clean-up on the bike and a little bit of maintenance. I’ve had this bike for 12 years, the longest I’ve ever owned a motorcycle . . . ever. Sadly, I didn’t put that many miles on it, considering the time: about 54,000 miles. Since I bought my WR250X in 2009, the V-Strom has taken a second-fiddle position for everything but long distance rides and even some of those I did on the WR.

I can’t help myself, the fact that Craig’s List doesn’t limit the wordcount is just freedom to go nuts for me. Too many years of editors telling me how many words I get to use for a subject. 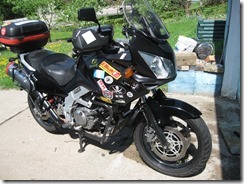 I bought my V-Strom used in August 2006, with 1,400 miles on the odometer, when the V-Strom was still a fairly new model and adventure touring motorcycles were very new to the US. I bought it from a “kid” in Cincinnati, sight unseen, on a salvage title. The original owner, an old guy, had bought the bike, ridden it for less than a season, dropped it in his driveway, and did enough damage to the plastic, bars, levers, and exhaust to cause his insurance company to total the bike. The guy I bought it from put new bars and a brake lever on the bike, got an Ohio salvage title, put more than half of the bike’s miles on the odometer, and sold it through eBay to me. Since then, I have ridden my V-Strom to the Arctic Circle and Alaska, to the West Coast and back a few times, to Nova Scotia and across much of the North East of the US and Canada, to Texas and New Mexico, on a North Dakota ghost town tour, to Colorado and the Rockies dozens of times, and up and down much of the length of the Mississippi River more times than I can remember. Last fall, I rode my V-Strom to Thunder Bay, Ontario for a week of back-road Canada exploring and when I came back home I did my last complete maintenance on the bike. After doing an oil change, chain adjust, fluids check, and the usual routine, I managed to drop the bike against a retaining wall in front of my garage and I needed help to get the bike back on two wheels. I realized, at 70, I am near the end of my 55 years of motorcycling. 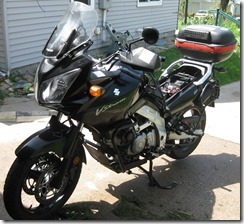 It feels disrespectful to sell this motorcycle in this condition. I wouldn’t call it “put up wet,” it has definitely been ridden hard and I simply don’t have the energy to do one more thorough repair and rejuvenate maintenance pass. If you’ve read my Minnesota Motorcycle Monthly column, Geezer with A Grudge, you’ve heard a lot about my adventures on this motorcycle. The 12 years that I’ve owned this motorcycle has been the most adventurous, interesting, reliable and dependable, longest, and strangest period of motorcycling in my life. For 10 of those 12 years, my V-Strom maintenance and trip preparation routines were almost as much a part of my motorcycle life as the actual riding. Physically and mentally, this year has been rough and I’m just not up to pulling the plastic off, patching, repairing, and replacing the broken bits, and reassembling the bike. So, it’s for sale as is. Of the dozens of motorcycles I’ve owned and sold, I have never handed one off in less than “ready to ride across the country” shape, but my V-Strom will need some work before it is ready to pound big miles. 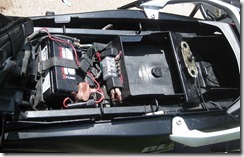 The 650 V-Strom review I did for Minnesota Motorcycle Monthly (“Me and Wee”) in 2007, includes some of the accessories I’d added to my V-Strom. Beyond that, the bike has the best suspension addition I’ve ever seen, the Elka Street Motorcycle Series shock absorber ($1600 worth of shock absorber), a front fork brace, GIVI E36 touring cases, a beat-up pair of GIVI E21 cases, a Sergeant custom seat, a Giant Loop Kiger tankbag, a Scottoiler system, a Stebel Nautilus Air Horn, IMS serrated footpegs, Pat Walsh crashbars and bashplate, a Suzuki centerstand, hand guards, and a power distribution system that provides fuse protection for heated gear, and connections for USB or lighter power. I installed a new battery this spring. I have the stock shock, a GIVI rear case mount, assorted spare touring parts, and most of the stock parts that I’ve replaced with aftermarket bits. 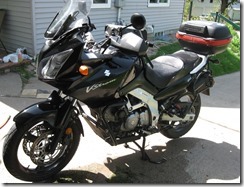 The fairing and front fender took a beating when I was blown backwards on the Dempster Highway in the Yukon and that is my excuse for the decal decorated right side fairing. I broke the mounting for the right turn signal when I dropped the bike in the driveway last fall and some how the left turn signal wiring disconnected then, too. The rear tire is in good shape, but the front will probably need to be replaced in the next couple thousand miles. After sitting untouched all winter, the motor fired up instantly with the new battery this past month. The engine uses about a quart of oil every 3,000-5,000 miles and has since it was new. The valve clearances were last checked at 48,000 miles and they have never needed adjustment and I’ve checked them every 12,000 miles. 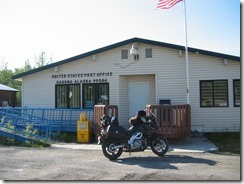 The first picture in this ad is not what the bike looks like today, but it is my favorite picture of my V-Strom. It was taken in 2006, not that many miles after I was blown backwards on the Dempster Highway in the Yukon about 120 miles north of the Arctic Circle. Me and the V-Strom were bent and broken, but still moving and covering new ground. We’d done several 1,000+ mile days together and would do several more that trip and it was early in what was the most intense relationship I’ve ever had with a motorcycle.