One, Two, Three, or Four Fingers?

In the MSF program, instructors are infamous for requiring students to use their whole hand on either the throttle or the brake. Not just one, two, or three finger braking, but the whole collection of finger-like digits; "If you have 'em, use 'em." This is a position that generates a lot of controversy among "experienced riders" who have cultivated (politi-speak for "clung to beginner habits") a variety of tactics that involve various fingers applied at random times with an assortment of justifications with empirically inconsistent results. There are some strong justifications for the MSF position. Is this the best way to teach front brake use? Probably. Is it absolutely the only right way to use the front brake? Not necessarily. 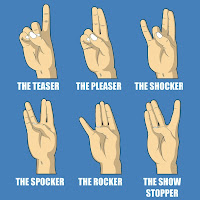 Sometimes even more controversial, MSF instructors are not fond of the "covering the brake" habit. (The 2013 MSF program is less emphatic about the consequences of this tactic, which more reflects the MSF's milktoast character than actual safety considerations.) I believe this tactic mostly comes from a fevered need to feel "prepared," in case a piano falls out of the sky and scares the crap out of you. Newbies may want the security of nervously covering that apparatus in case they forget where the brake is, but "need" and "want" are not the same animal. In high tension situations, it is natural to want to be ready to stop. The problem is, more often than not, grabbing a handful of brake is exactly the wrong move. All of those "I had to lay 'er down" stories are examples of how poor braking tactics turn into a justification for doing something stupid. Rubber will out-stop metal and plastic any time. Besides, we all know you didn't "lay 'er down," you screamed, panicked, and fell down. One reason for breaking the brake-covering habit is to force a few moments of thought into the decision-making process. If your hand is already on the brake, you'll use it before thinking. 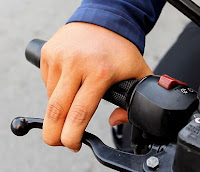 There are a lot of arguments on the web and in bars and every other place motorcyclists hang out about how many fingers are necessary or ideal for precise, safe rapid stops. I snagged a portion of this answer to a question from a newbie about his MSF BRC experience from a moto-discussion site; "Some use 2 fingers because you can keep them over the lever at all times. If your brakes are bled correctly and the lever is adjusted, you will not trap the other fingers. (Tell me how that works out for you if you drop the bike hard on the right bar. Ever see a busted lever, kid?) How many fingers you will need in a emergency is dependent on finger strength and brake caliper strength." Another of those kids claimed, "I convinced a friend to ride with two fingers always on the break[sic] and he said the habit saved his life." When that friend drops the bike in a corner because his "habit" caused him to grab the brake when he should have been no where near that control, I wonder if the kid with the "great advice" will take the blame?

I think habit explains why so many riders feel the need to rest their fingers on the brake. Safety or preparedness are pretty low on the list of logical justifications for this practice. Fear is a lot higher on the list, but most riders won't acknowledge that. They began hanging on to the grip when they first started riding and haven't re-evaluated the practice since. New riders are terrified of letting go of the grip and just as nervous about taking their fingers off of the brake. Terror does justify a habit. 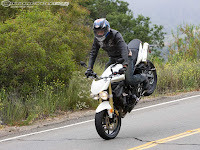 Obviously, some brakes and some riders are able to get all the stopping power they need from one finger. YouTube and the Web are full of guys showing off their one finger stoppie power. That doesn't make one-finger braking a brilliant concept, or a safe riding habit. A stunt is not the same as an unplanned emergency stop. In a stunt, you not only aim for the best possible spot to make the stop, you shift your weight to maximize the pressure on the front wheel to prevent skidding, and if you screw it up it you'll probably survive to try again. In an emergency, you want to stop with as much control and power as possible. If you screw it up, you might be dead.

I'm a long ways from an MSF-fanatic, but I do think our training organization is right in teaching the four-fingered braking habit. Being the single-minded, single-task animal we humans are, learning how to use the front brake with power and confidence is life-saving. In fact, if you never learn how to use the rear brake, you're only giving up on 10-30% of your stopping power. Precise front brake operation is one of the most critical skills in motorcycling. One of the reasons for learning how to perform a skill absolutely correctly is, then, you can intentionally modify that technique when conditions change. If you never learn how to use your brakes correctly, you won't suddenly figure it out in an emergency.