#135 Another Brick in the Wall

Australia's South Wales legalized "motorcycle filtering" in 2014. A friend, Paul Young, sent me a link to an article about the event in AsphaltandRubber.com, which was sort of news in itself. It's not often that any US media realizes the rest of the world exists, let alone Australia and, even more, South Wales. Paul's note, along with the link, said, "Never happen here in MN, we don't have enough folks riding in traffic to justify it." Not only is that true, but Minnesota doesn't really have the motorcycle traffic to justify the existence of motorcycles on public roads. Worse, we don't have that traffic anywhere in the US. As the AsphaltandRubber article indirectly said, US motorcyclists "have relegated their machine to purely recreational duties . . . " It's hard to imagine the mathematics necessary to prove good reason for allowing public road access for our noisy, polluting, unsafe, and antisocial vehicle of choice. But if we wanted to hang on to our on-road privileges, putting aside the old petty biker animosities and working together to get filtering and lane-sharing legalized all over the country would be a good place to start. 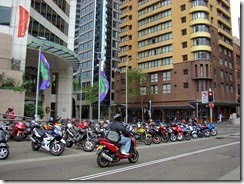 As usual, we motorcyclists are our own worst enemy. AsphaltandRubber's writer claims, "So, when ignorant bureaucrats eventually come to their senses about the realities and benefits of filtering, as riders we can congratulate our fellow riders while reluctantly patting the receding hairlines of those enlightened policy-makers." You wish. For one, the receding hairlines are those of aging motorcyclists, as our demographic rapidly resembles that of the Tea Party; old and uneducated (Except for California where we are old, rich, and married). What exactly would make "ignorant bureaucrats . . . come to their senses?" Our sterling reputation for citizenship? The love the rest of the country holds for the noisiest, most arrogant, least skilled, most expensive-per-mile-driven vehicles on the highway? Our safety record or our contribution to minimizing highway congestion? Again, you wish.

For two, what "realities and benefits of filtering?" I'm not arguing that filtering is a bad idea. The problem is filtering is only viable if there are enough responsible motorcyclists on the road to make the legislation worth the time and effort. The problem is, none of that is the case in the US. So, I am arguing that motorcycling's current demographic of hooligans and outlaws does not inspire confidence or warrant effort from "enlightened policy-makers." The country is swamped in problems of huge magnitude and we are a piddly little drop in the lake. Get real, kiddies. Honda had the right idea fifty years ago when they tried to convince the country that they would "meet the nicest people on motorcycles." If we want to get the kind of privileges the rest of the world's motorcyclists take for granted we're going to have to clean up our own act and at least become something better than the nastiest people on the road. One way to do that would be to crank up the requirements for obtaining a motorcycle license, drop the hammer on riding without a motorcycle license, and to start a new motorcyclists' organization that is directed at obtaining useful rights for motorcyclists (no more fighting helmet laws or exhaust noise ordinances). Obviously, ABATE and the AMA have to change or go. They are making about as many friends for the vanishing number of US motorcyclists as the NRA is for gun owners.

A the end of a long weekend of MSF classes, I had a fairly long conversation with a couple of "Seasoned Rider" students and my co-instructor about lane sharing, filtering, and riding in California. I was the lone rider who thought filtering and lane sharing are a necessity for motorcycles to be practical commuting vehicles and to make a worthwhile contribution to traffic congestion reduction. The two students were not only unaware that those two motorcycle options existed anywhere but were terrified of the concept. My co-instructor lived in San Francisco twenty or thirty years ago and "never tried it." You might know that I lived in southern California for a decade and filtered and split lanes ("shared" for the PC crowd) every day I rode on every road that I travelled. The college degree I finally earned was absolutely indebted to my "right" to split lanes and filter on the Pacific Coast Highway between Costa Mesa and Long Beach. My two recording studio-oriented businesses, especially studio maintenance, couldn't have survived without lane splitting on the 405, 5, and I10. I once hauled two highly-modified JBL 4311 studio monitors strapped to the back of my '82 Yamaha Vision from Huntington Beach to downtown Santa Monica Boulevard, LA, on a Friday afternoon, splitting lanes through 5mph freeway traffic to meet an otherwise impossible session date. The speakers ended up being rented for two months and several famous-name artist sessions. The rental fee pretty much took care of our overpriced apartment rent for most of a month.

To paraphrase a famously awful Minnesota motorcyclist, "You ask why I wanna lane share. Man, I don't believe you don't want it too."

Opinions on lane-splitting say a lot about individual motorcyclists. If you are afraid of splitting because you don't have the skills and confidence to do it, In my opinion, you don't have the skills or confidence to be safe in any highway traffic situation. If you hate the idea because your motorcycle is too wide, heavy, or awkward to split lanes, I think you and your bike should be confined to Shriner parades and closed-course clown-costumed demonstrations. You are part of the problem. Contrary to the loud pipe bullshit, the only worthwhile defense a motorcyclist has on the road is maneuverability. Gear and armor is fine, but if you are going to clash with a cage, bus, or truck the best you can hope for is that the gear will minimize your injuries. The best defense is a well-engineered motorcycle that can go places where no cage can travel. One of the best places to go is between stopped cars and as far from impending doom as possible putting as much inert iron between you and a distracted driver about to create a multi-vehicle pile-up.  Hoping for the best is not an crash avoidance tactic. A "safe" motorcyclists is always planning for the worst and doing everything possible to achieve that happy ending. One of the most basic tools available to us is an ability to split lanes in traffic and to filter to the head of a stopped line of traffic. How we earn the right to do that is a problem we're going to have to solve if we want to stay on the road.

Good article. I'm a 25 year member of ABATE of IL and a Life Member of the AMA and agree that both need to change to meet changing trends. Unless/until motorcyclists start seeing motorcycles as transportation, we're gonna be relegated to the margins. Ride Safe.

Thanks for your comments, Tom. I tend to be pretty irritated with these organizations (to abuse that word) because they seem to be totally focused on issues that are not in the long-term interest of motorcyclists and motorcycling. Members like you could change that.

Thanks Jason. Someday before I'm too old to enjoy it, I need to visit AU so I know what the heck the place looks like. My wife lived in Australia for a few months in the 60's and still loves the place. She might even know where New South Wales is.