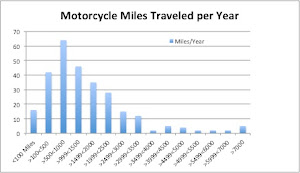 For a bit of self-entertainment, I created a spreadsheet to collect data about how many miles a typical motorcyclist rides in a year. A few other riders and I grabbed sale ads from CraigsList all over the country and the spreadsheet takes that data and turns it into a look at who rides what how far in the good old US of A. The numbers are enlightening and a little depressing. The gross overwhelming majority of motorcycles get ridden less than 2500 miles a year. My observations and suspicions were confirmed, Americans are not really motorcyclists (Except, possibly, in Mexico; which is, after all Central America.).

One point I was trying to make with gathering this data is that justifying a bike larger than 250cc is a pretty specious argument. Even those cheap Chinese bikes sold off of trailers at swap meets can survive a decade of 1000-2500 miles/year use and abuse. However, I know a lot of you can't maintain your self-image on a small motorcycle. So, In the interest of providing a public service for those of you who desperately want to imagine that you're different than the average biker, I've decided to come up with a short list of reasons why you might need a faster motorcycle.
Of course, buying a smaller, easier-and-more-fun-to-ride, more fuel-efficient motorcycle would make a lot more sense under most conditions and for the majority of US riders, but when has recommending practicality been an American marketing tactic? I realize that most of my ten "reasons" are suicidal. With a firm grasp on 14% of total road fatalities, for a good number of us riding a motorcycle of any sort appears to be self-destructive. At the core, I'm serious about this. If you are one of the majority of riders, you have no need, business, or fashion justification for a race bike wannabe. It doesn't make you look cool, younger, skinnier, smarter, or richer. The riding and general public just assumes you're on the monthly installment plan and will probably turn the bike back to the loan company the first time you drop it in your driveway and skin up your unprotected knees. The best you can hope for is to be ignored until you go away.

POSTSCRIPT: Oddly, the next issue (#166, June 2015) Victor Wanchena, MMM's publisher, felt the need to "correct" me in a "The Geezer Gets A Response" column:

In response to Thomas Day's article from last month [MMM #165] I would like to offer the following rebuttal. Thomas has missed the point completely. While focusing on the point that only a small handful of riders can use a liter-class sportbike (or an overweight, overpowered, poor handling hippobike, TWD) to its fullest potential, he misses the salient point. The beauty of freedom of choice is just that, you can choose. If I wish to buy an epically fast sportbike and wobble around corners like a noob that's my preogative [SIC]. We are free to ride what we want. No one should dictate what to buy as long as you aren't riding in such a way that endangers others or impinges on their freedom. [How about their medical insurance costs? TWD] There is an inherent beauty in the freedom to make choces [good or bad] on your own. We, as riders, don't need to be save d from ourselves [NHTSA and insurance companies would disagree. TWD]

Does anyone need a fast sport bike? No, but that's not the point. I resist any attempt to tell me what I do or don't need. If motorcycle swere restricted to what someone else thinks we "need" then we'd all be trundling around on 49cc mopeds. [Interesting analysis of what motorcyclists really need. TWD]

I support Thomas's decision to not own one as much as I support anyone who decides to buy one. Viva la difference. I now plan to go ride laps around Thomas's house on my loud piped 950cc dirt bike.

Since I submit about 40 articles for every one that gets published by MMM, the "concerned" part is pretty funny. I put 'em out there and Victor's editor picks them out of a big old hat. What MMM doesn't use, Rider's Digest does, and what I can't petal to those magazines I try to hustle to Motorcyclist and other magazines receptive to freelance writers. What's left or what isn't long enough or politically-correct enough ends up on the blog first. The blog gets about 50% of my original ideas.

My point was that riders get a lot of this kind of bullshit from dealers, uninformed "friends," biker gangbangers, and pretty much every publishing source. "Don't bike a small (under 1,000ccs) bike because you'll outgrow it." Motorcyclists are the most likely to die folks on public roads. Nothing with a license plate is more dangerous than motorcycles and a good bit of that is because too many mediocre riders are dangling from big bikes like cheap plastic streamers.

People in some occupations should be the last people to lecture about the glories of "freedom," but I don't give a damn about any of that silliness. If toy manufacturers, consumer product manufacturers, drug and medical device companies, food producers and packagers, car companies, grocery chains, restaurants, bartenders, and most of the rest of the service and manufacturing industry have liabilities due to consumer misuse or design flaws, gun and motorcycle manufacturers ought to be subjected to the same rules and penalties. If you put a fat, crippled-up, old drunk on a liter bike and he rides out of your lot and gets killed, you own some of that responsibility. Delivering that bike to an irresponsible, untrained dealer's sales staff if part of the sequences of liability.

We can continue to pretend that ignoring all of this shit is going to slip by the attention of the other 99.999..% of the population, but since we're going to be taking up a larger and larger percentage of highway fatalities as cars, trucks, and buses continue to become safer and safer that tactic is going to blow up in "freedom's face."

I hadn't seen the original of this article and it remains ever truer today. I learned on a Honda Trail 90, moved "up" to a Bridgestone 125, did most of my adult miles on a Honda CB450 and BMW 750/7. I'm guilty of having more motorcycle than I need in my Ducati ST2 but compared to many current offerings in weight and horsepower, the 16 year old Duc is small and quaintly underpowered. At least I ended up the year at around 7000 miles so my skills remain intact although my mind is far gone enough to want to keep riding. Riding my 80HP Duc anywhere near the limit takes more skills and stupidity than I have. Riding an R1 anywhere near its engineered limits takes Valentino Rossi and a track. People are stupid.

Thank you for re-posting this. As I contemplate selling my 650 cc Suzuki Gladius for either a Honda CB500x or a new Kawasaki Versys 300x I am surprised at how many readers think that will be too small for me.

Sure I might miss the v-twin power but realistically I avoid freeways (who doesn't) and do more back roads and gravel forestry roads than anything. If I can do 65 mph on my TW 200 I am sure either of my other choices would be fine.

Sometime every summer out of the last five years, I've questioned why I own a V-Strom 650. The last two years I had to fabricate a "ride" that justified loading up the V-Strom's more-than-adequate luggage. This past summer, I was so ambivalent about the 650 I completely blew off my traditional pre-trip maintenance and suffered the consequences for 2500 miles of nervous travel. I put 3x as many miles on the WR250X both years as the 650. There was a time when I really loved riding the V-Strom, but I think those days are gone. I see so many riders store up their energy, money, motivation, and courage before they take their big bike out for its annual excursion that I suspect anything over 500cc and 400 pounds is a gumption trap for most of them.