This is what the bike, supposedly looked like when it was new: 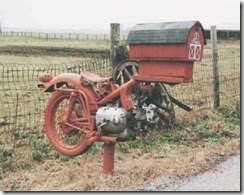 his is the best use I've ever seen made of a Harley Sprint:

My brother bought this bike somewhere around 1968. Being the abusive big brother I was, I used the heck out of the bike, mostly, against Larry's wishes and knowledge. He has been trying to catch up with me, on the abuse and creepy-ness scale, ever since. Since he's a terminally nice guy, I'm destined to stay in the lead for the rest of our lives. 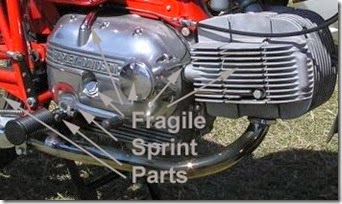 This was, simply, an awful motorcycle. Like most Harley's, the Aermacchi/Harley was poorly engineered, under-powered, overweight, and unreliable. I bashed it a good bit of the way to death on figure-eight "rough scrambles" tracks in Dodge City, Kansas, but it wasn't worth much before I stumbled into it. The suspension was awful, so we replaced it with a pair of chunks of steel plate in the rear and shimmed the springs to immobility in the front. The footpegs kept breaking off, whenever I rode over any kind of bump. I learned how to weld in the process of reinstalling them every week or so. The motor started life weak and ended up so anemic that you could kick start it by hand.

The only good thing I can say about the bike is that it had two wheels and made more noise and was slightly faster than a bicycle with playing cards in the spokes. Kansas was an awful place to ride motorcycles in the 1960's. Folks you'd never met would go out of their way to run you off of the road. I became an "off road rider" because the ditches were where I spent all of my time, anyway. I figured that staying there was safer and faster than zigzagging from the road to the ditch every time a car passed me in either direction.