During the parade season, there is never a shortage of noise makers in 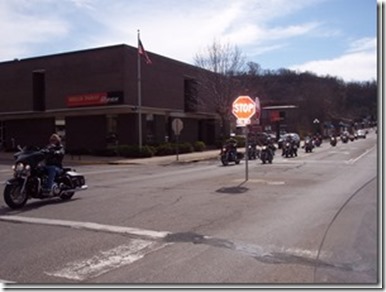 Red Wing. However, as a motorcyclists’ location . . . not so much. I don’t know why that’s a fact, but it is. When I first moved here, I set out to distribute MMM to the various places I thought might attract motorcyclists (not necessarily bikers, but actual motorcyclists). I hit the college cafeteria, local restaurants, the library, and the bike shops. After a couple of months, I got the bike shops set up with their own supply of magazines, but I quickly noticed that there was no point in replenishing the other locations because the first set of issues were still there. Two years later, some of those first magazines are still waiting for readers.

Lucky for me, Red Wing has a decent Suzuki and Yamaha dealership, but I don’t know why. The dealership seems to retain the same collection of “new” and used bikes for at least a couple of seasons, probably until another dealer or wholesaler takes them off of their hands. If it weren’t for boats and ATVs and snow machines, I suspect we’d lose that dealer. The Polaris/Victory dealer never seems to have customers and I’d guess someone is burning up a trust fund with that venture. Likewise, the local community college offers a summer full of motorcycle safety classes, but 3 out of 4 of my last season’s MSF classes cancelled due to lack of interest, including an Intermediate Rider Course that wasn’t supposed to cancel under any conditions. On a typical work day, it’s rare to see more than one of two bikes on the road and most of those will be touring riders passing through town.

It’s a mystery. Red Wing and the surrounding territory is a massive riding resource. We have twisty roads and small towns with history and good food and recreation. You can’t beat the river valley for upper Midwest scenery; it’s the closest thing to mountains we have for 650 miles. As a mostly-dirt rider, I have more interesting country roads and marginally maintained back roads than I know what to do with. It is incredibly easy for me to burn up a tank of gas in an afternoon without doing more than crossing pavement every 50 miles. There is even a few sections of actual off-road riding from abandoned farm roads that haven’t yet been converted to farm land.

Outside of the summer pirate parades, it feels like motorcycling is on its last legs here. All of the riders I know are over-50 and most of them are on the edge of giving it up. The kids I meet who talk about buying a bike and learning how to ride just talk about it. It’s not a practical thing for them, for whatever reason. There is some off-road activity in Elsworth and I should get over there to check it out. But . . . it’s Wisconsin and a battlefield of starving small towns and bankrupt counties all overstaffed with highway patrol and sheriff’s deputies haunting the backroads to make their quotas. I cross the river only when I really need to.