Motorcyclist Gets It Right 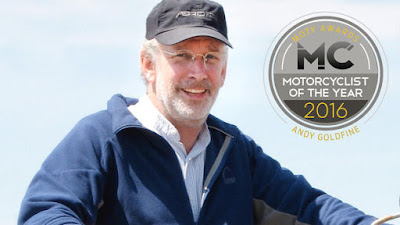 Out of the tens of thousands of worthy motorcyclists in the country, Motorcyclist Magazine got it absolutely right this year in declaring Andy Goldfine "Motorcyclist of the Year." Andy and the amazing folks at Aerostich/RiderWearHouse have been making motorcycling safer, easier, more fun, and drier/warmer for 33 years (which means another Very Boring Rally is due in 2 years). Many of us would have been doing something else by now (if we were still alive) if it weren't for Aerostich gear.

Andy has been a friend since I moved to Minnesota and started writing for MMM. Andy's gear has been protecting my body for a whole lot longer. 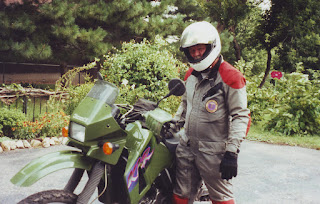 One of the last pictures of me wearing my ancient (1984) Roadcrafter was in the KLR MMM review way back in 2002. I bought this fine stylish assortment of nylon, zippers, snaps, and cotton bat padding when I first moved to California and discovered that California motorcyclists thought 50F was "too cold" for motorcycling. Since I'd just moved there by motorcycle from Nebraska, my opinion of Californians went down a few notches. Worse, none of the motorcycle shops within easy range of my new home, Huntington Beach, stocked any sort of wet weather riding gear. However, in the back of Cycle or Cycle News (I forget which) I found a picture of a rider in a full-length suit and the ad claimed the suit was "waterproof" or some such thing. Desperate for protection, I ordered the grey/red suit pictured above (the red turned to salmon sometime in the 80's) and I have to give that suit some credit for my Cal State Long Beach bachelor's degree and a ten year California career in professional audio equipment because without that suit, I'd have given up on California a few weeks after being forced to commute by cage.
In the late 90's, I met Andy and he immediately dubbed me and my Roadcrafter to be a pair resembling "an overstuffed sausage" (probably the reason the suit had spent the last decade at the bottom of my closet). He sold me a (considerably larger) Darien suit in 2006, before I left for Alaska and a few years later I bought a prototype AD1 jacket and AD1 pants for backup. I've written about both here more than a few times.
It's not like there weren't obstacles to overcome. In the Motorcyclist Magazine interview, Andy said, “At first only a handful of riders ‘got it,’ including motojournalists, who were on bikes every day. And even then we were made fun of.” I still get the "going into outerspace?" bullshit whenever I stop near the usual pirate crowd. Usually, when we compare our day's ride (100-150 for them, 400-1,000 for me) the conversation comes to a stuttering end.
Google "aerostich roadcrafter crash" and it is impossible to not be impressed by the stories of the skin, bones, and lives saved by Aerostich equipment. There are dozens of Aerostich imitators, but only one company makes gear that you can wear for most of your life and Andy Goldfine founded that company. Even the owners of the imitation gear owe Andy a debt because none of that cheap Chinese-made gear would be here today without Aerostich to copy.
Helmets off to you, Andy.
Posted by T.W. Day at Wednesday, October 05, 2016