On top of our all of our negative image problems, motorcyclists are often hoarders. Yeah, I know, it's a "collection." In my experience, there are two polar-opposite examples of collectors who own (and sometimes ride) dozens of motorcycles. The most obvious is the rich collector/archivist. Over my six decades, I have bumped into a couple of types who collect expensive motorcycles. One of those was the type who owns a sterile showroom that is neatly lined with perfectly restored bits of artwork, polished and oil-free to keep the hardwood floor spotless. At the more sane end of this type is a friend who buys incredibly expensive motorcycles in mediocre-to-good shape, restores them to better-than-factory finish, hangs on to them hoping the bikes' prices will go stratospheric, and tries to sell them for a medium fortune. Once he has the cash from the last bike in the bank, he starts all over again. He always has a dozen bikes in the supply chain, but everything is for sale at any time. This is the speculator variation on the rich guy collector. Maybe he should be called a "wannabe rich guy?" When the economy tanks, this guy will be among the "get rich on real estate' goofballs who lived large until the sky fell and, now, will be forced to get rid of his overpriced crap for what it is worth; nearly nothing. So far, he's avoided that disaster pretty deftly, though.

That about wraps up the interesting portion of the personalities of rich guy motorcycle collectors. Like most rich people, they're mostly boring. 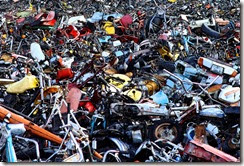 However, the more common and most interesting (as in "weird") collections I have seen are garages and sheds full of marginally-fixable motorcycles in various states of disrepair and disassembly. Most of these guys are of the "all of this stuff is junk but if I sold it I'd just have more money but no junk" hoarder variety. Instead of carving paths through the old newspapers and cereal boxes, these packrats stuff their garages and barns full of half-reassembled semi-vintage crap, scavenged parts that will "someday" end up reinstalled on the vintage crap, more parts that can't even be identified, and boxes and piles of old motorcycle magazines and service manuals.

If you foolishly express an interest in some motorcycle in the hoard, you will end up risking your life using rock-climbing techniques to scale the heaps of junk to get a dim glimpse of a small bit of one of those bikes buried under a moldering tarp in some far corner of Squirrel Hell. It's best to act as ignorant and neutral as possible and get the hell out while you can still walk. If the hoarder is a Minnesotan, he'll be convinced he has millions dollars "invested" in his vintage crap and he's just waiting for Leno or the "What's in the Barn" guys to show up and make him rich. The Minnesota hoard-mating call is "If I can't get my price, I'd rather keep it." We've been here before (see A Seller's Market, MMM Winter 2005). The seller is serious. He won't sell for anything resembling a reasonable, realistic price. This is exactly the kind of guy who thinks a beat-up 1972 Kawasaki Z900 is worth a few thousand. You are not going to get a good deal from this dude, but you could waste hours listening to his crazed economic theories. You will also need a tetanus shot after you get back from exploring his "collection."

I have to admit, most of the collector thing eludes me. I am a big fan of "when in doubt, throw it out" (or sell it if it's still worth money). A garage is a place to store tools and other stuff and, most importantly, a place to keep your car and motorcycles out of the sun and bad weather. When the garage is stuffed with junk motorcycles, you can't get to the tools and you can't park the cage indoors. In my neighborhood, that means the cage's gas tank will be siphoned-off and, most likely, I'll have to buy a new car stereo and a window or two every summer. (Not really, but I could live in that kind of neighborhood. After all, that is my socio-economic bracket even if my neighborhood is a decent place.) Plus, I have always aspired to be able to move all of my stuff in one mid-sized U-Haul and my dream life would be living in a 30' camper traveling from one state or national park campground to the next, always a month ahead of cold weather.

I can't help but suspect some motorcycle collections are another bit of evidence that some guys can't commit to anything. Outside of racing, you seriously can't find one or two motorcycles that do everything you want to do on two wheels? Not that you're trying to do anything with that pile of rotted seats, hoses, and tires and the stacks of half-disassembled motors. It's just a hoard and the purpose of a hoard is . . . something non-motorcycle-related.

You should look at the UK TV programme 'Shed and Buried'

In my geezerhood, I'm easily terrified by stories that "could be me." I avoid all reality television like it is the end of civilization, but hoarder and collector and purist stuff is really beyond my scope and tolerance.