Today was a big mile day; from Flagler, CO to Le Mars, IA (barely under 650 miles via the route I took). Honestly, I would have missed nothing if I’d have zoned out for 550 of those miles. There is a reason that shit is called “flyover country.”
One highlight came just before I hit I80 in Nebraska, in Holdrege, NE. The O’Reilly Auto Parts dealer had a terrific assortment of motorcycle oils and they let me change my oil in their shop. They could not be a nicer bunch of guys. 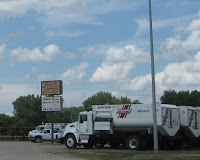 A little blast from my past came along when I hit the south edge of western Nebraska. From there until I turned north at Schuyler, NE I was reminiscing about awful old days when I worked in ag equipment and was too damn young to know when I was being screwed over. I put in three years with this sweatshop and averaged 100,000 miles a year in a rat E150 Ford Econoline that didn't have a heater, barely had a transmission, and was totally unsafe at any speed due to the 1/2 ton of gear stored behind me.
I ended the day about 290 miles from home, in Le Mars, IA at the Amber Inn Motel. Great location! Across the street from a terrific pizza place, P’s Pizza House, and a Tex-Mex restaurant I didn’t have room to try.
Posted by T.W. Day at Sunday, July 03, 2016