If I’d have made it this far, this would have been a doubly fun book to review in life. I met David at the 2013 VBR3 in Duluth and got to speak with him, extensively, about motorcycling, motorcycle training, and other radical ideas. It spawned a whole lot of thought and writing that probably ended when I died. This is an excellent book and a thoughtful analysis of motorcycling. I’m publishing this review on what would have been my 68th birthday. Happy Birthday me! 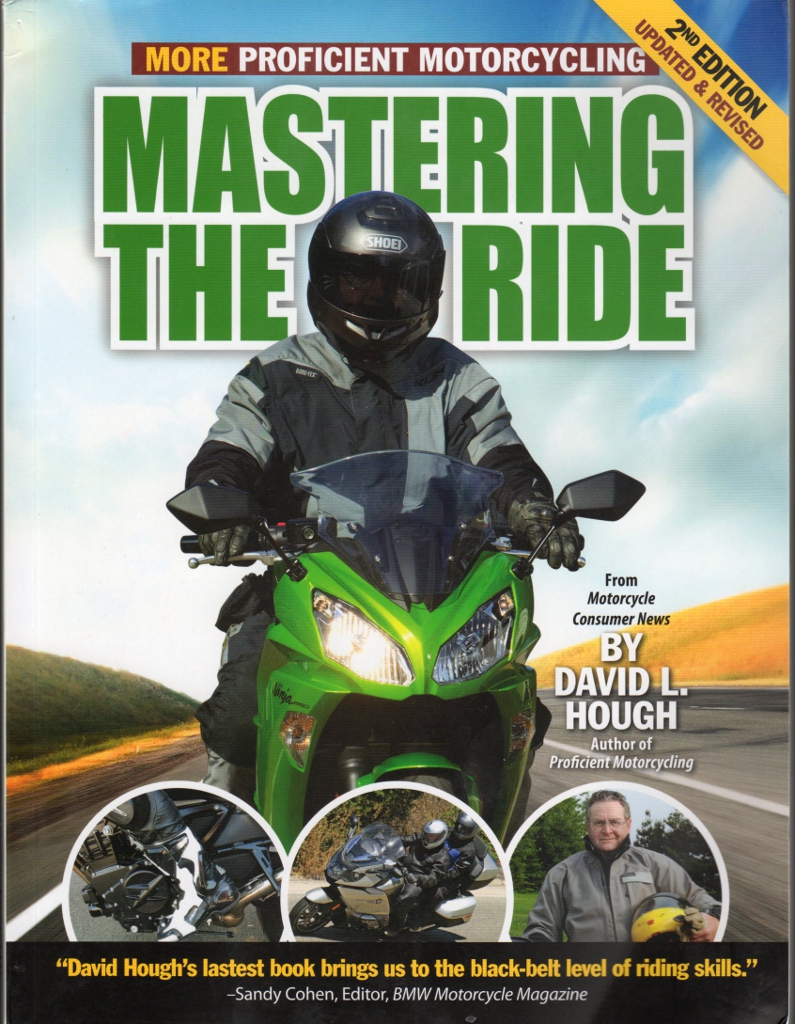 David Hough and, through his writing for Motorcycle Consumer News, Sound RIDER!, and BMW Owners News has been a strong advocate for motorcycle training and safety for most of his 75 years. Hough was inducted into the AMA's Motorcycle Museum Hall of Fame in 2009. As a motorcycle safety advocate, Hough has won the Motorcycle Safety Foundation's Excellence in Motorcycle Journalism award twice, but he isn't one of the MSF's fans. In fact, in this 220 page book, the MSF is mentioned exactly three times and mostly in an unfavorable light. In 2004, through a short series of MCN articles ("Trouble in Rider Training 1 & 2") Hough championed the argument that the MSF is more committed to selling motorcycles than promoting motorcycle safety and crash and fatality reduction. In 2012, he obviously holds the same positions to be true.  There are numerous references to rider training programs that Hough considers to be worthwhile, but the MSF is not among them. With that as a background, the newest edition of Mastering the Ride takes on many of the issues Hough believes are driving motorcycle fatality statistics into public discussion.
Hough has some excellent arguments regarding how we ride and how that relates to the frequency that we end up in hospitals and cemeteries. Marketing gurus say "perception is everything" and that goes for motorcycling, too. Several sections of Mastering the Ride are dedicated to discussions of safe following distance, scanning for hazards and escape routes, visibility, and evasive maneuvers. In many piloting, automotive, and motorcycle training programs, this translates to SIPDE (search, identify, predict, decide, and execute). This takes the MSF's SEE (search, evaluate, and execute) to a more functional and detailed level by forcing riders and drivers to think about all of the steps necessary in avoiding catastrophe on the road.
All of this stuff is about learning how to accurate gauge and react to typical situations with exceptional skill. Since Hough managed to overshoot his own limits at a ride in August 2012 and crashed Lee Park's Triumph in an emergency stopping maneuver, some people might take his advice with a small block of salt. However, most experienced riders know that there are only two kinds of motorcyclists: those who have crashed and those who haven't crashed yet. Hough isn't shy about illustrating this book with pictures of his own off-pavement misadventures and self-deprecating examples of moments when his mental state resulted in (or could have) his sliding down the road shiny-side-down. Crashing is just one possible result from riding a vehicle that doesn't balance itself.
There are a lot of valuable, but subtle, riding tips that could be missed by a first pass through Mastering the Ride. As an example, in MSF classes, instructors always challenge riders to "look where you want to go," but Hough extends that further by saying "point your nose . . . in the direction you want to go." Using the fighter pilots' tactic of both looking in the intended target direction and keeping your eyes level to force a commitment to a direction change, this hint goes a long ways toward minimizing "target fixation." Just for this tip, I'm glad to have read the book.
Hough's take on preoccupied drivers is accurate and usually far more politically correct than my own. When he describes the reckless homicide rear end crash that took Anita Zaffke's life in 2009, he doesn't provide more than the first name of the victim or much of a condemnation of the homicidal fingernail-painting driver. In a similar fashion, he refrains from seriously criticizing modern driving skills or in-vehicle distractions. Hough is less politically correct when he describes most US highway law enforcement tactics as being "revenue generating" rather than safety-oriented. Having been hooked by speed traps in some pretty silly locations and even sillier law enforcement legal interpretations, I'm totally on board with Hough in this regard.
Hough mistakes bicycle habits or newbie fear for skill when he describes using two or three finger-braking as an advanced riding skill. If you watch the extras on the Faster DVD, you'll see that Valentino Rossi often uses all four fingers and I suspect Hough is rethinking his own braking skills after flipping Park's Triumph this past summer. There are times when two finger braking is more than enough, but making that a regular habit is a formula for reduced braking when you really need it and a busted finger or two when the bars slam to the ground in a right turn low-side. His take on advanced braking systems (ABS and linked) seems to be pretty "old guy biased," too.
Where this book shines is in the street riding strategies. Hough describes a roadway that is in constant flux and a high state of hazard; just like the roads we all ride. His tips for evaluating traffic, turn radii and camber, road surfaces, and other road risks are valuable and expert. There are two appendix entries that the majority of American riders should read: "The Aging Rider" and "Travel." Since the average age of American motorcyclists is moving right along with the Boomer generation, we're all heading toward that moment when we have to consider being too old to ride. Goofy "solutions" like trikes and sidecars aside, it is simply a matter of time for all of us. Hough is close to that point himself and discusses aging and declining skills honestly and factually. His admonition that we all need to ride somewhere on our motorcycles is just good sense. Ride someplace you've always dreamed of visiting.

Of everyone involved, I bet I'm the most surprised to still be alive today.