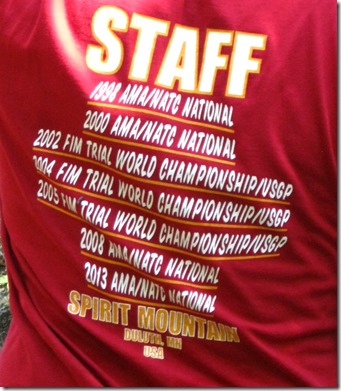 No sport works harder to be spectator-hostile than US observed trials. If you aren’t a big mile hiker, you might as well stay home since you have no hope of enjoying more than 20% of a typical trials event. If you aren’t an expert puzzle-master, forget about deciphering the “spectator map” typically handed out at these events. If understanding the rules to the sport you’re watching is important, forget about that, too. After a few minutes of watching any US observed trials, you’ll quickly come to the conclusion that there are no real rules to this sport.

After watching the dismal performance of US riders and the terrible spectator turnout at the absolutely amazing 2004 and 2005 World Championships in Duluth, I took a hiatus from the sport. We, clearly, suck at this as a nation. If there were 100 riders competing in a world event, our riders would be in the last dozen finishers, consistently. Usually, US riders don’t even have the balls to compete in world rounds, at all. This year, for example, Pat Smage was the only US pro rider in the Trials Training Center event at Sequatchie, Tennessee in the first US World Round event since 2008. Smage finished 12th and 11th of 13 riders. Pat scored well over 100 points in each day while the top 3 riders had less than that his point count, collectively. Points are a bad thing in trials. A perfect score is zero; think “zero errors.” When our guys try to take on the world-level competitors, it’s pretty obvious that trials isn’t even a third-tier motorsport in the US. I suspect if there is a Hoverround Mobility Scooter Olympics, it gets a better participant and spectator turnout than trials. The last time we didn’t suck at the international level was 1979, King Bernie might be our only trials accomplishment; ever.

Part of our poor showing in the sport is that, nationally, the sport is not well promoted; and never has been.

Sections are designed to be obscure and confusing to the uninitiated; i.e.. spectators. “If you don’t care enough to know the codes, you aren’t welcome” is the message broadcast loud and clear to every new visitor to an observed trials event. For example, identically numbered sections are side-by-side with the “understanding” that spectators should know that if the section start is roped off it is a Sunday section, although on Sunday the Saturday sections were still open and unmarked. I walked by more than a few frustrated spectators on the Saturday event who were patiently waiting for riders who wouldn’t come for another 24 hours. When I mentioned them to one of the checkers, he muttered something about “fuckin’ rubes” and went back to examining his navel until the first batch of riders arrived. When I walked my dog back to the stranded spectators and told them the real section was just a couple hundred yards down the trail, they decided it would be more productive to head back to the Aerostich rally and watch a few of the presentations in the air conditioned chalet. To be honest, I had some of the same inclinations after waiting for an hour and a half for the expert and pro riders to get to sections 4 & 5. I’ve been putting up with the rock and roll star character of observed trials for 40 years and the prim donna attitude toward spectators still gets to me. (Just like waiting until 9:15 for an 8:00 show to start will remind me of why I rarely spend much money to watch a rock show in my impatient old age.)

The worst-riders-first order of events is super rider-friendly, but makes for long, boring periods for spectators. Mixing experts and pros with the intermediates, support riders, and other classes would make waiting a section more rewarding and would force the pros and experts to be more creative in their route planning, since they wouldn't be able to make a committee decision on the test route for a section.

I fear this is all pretty academic judging from the current state of decline in US observed trials. There were a single handful of “pro” riders and not that many more expert riders in Duluth for the last two events of the 2013 NATC/AMA championship season. The people participating seemed as dedicated to the sport as ever, but their numbers are depressingly small. I heard factory guys complain of bare bones support for their riders and it’s pretty obvious that the incredibly costly commitment pro riders take on to ride the US series isn’t even close to a paying venture. Trials has become a motorsport of the bored rich, at the national level. That is never a good thing for a sport that pretends to want to become popular, just ask polo players about that, if you doubt my opinion.
Posted by T.W. Day at Friday, January 01, 2016