There has been a lot of mindless yip-yap on the internet and in the media about motorcycles and crashes and gear. My personal patience for listening to morons jabber about how helmets don't work and that gear is a pointless expense is exhausted. I'm on the edge of just telling them that I agree with them, even though I will continue to wear my gear, because I am absolutely a Zero Population Growth advocate and any way the world ends up with fewer people is a good thing. (I'm not quite there yet, but the day is coming.) Every racer knows that gear works and every real motorcyclist knows the same fact. The people who argue against helmets and AGAT are posers who will give up their motorcycle forever after their first little knuckle scratch or a patch of road rash convinces them that “motorcycles are scary.” They are the “lifestyle riders” who dream that riding a motorcycle will make them look cool. (It won’t. You are who you are and not piece of equipment/toy/badge of wealth will make you look any different than what you see in the mirror. ) Gear works and some gear works better than others.

David Chesson's crash report was taken from the FJR Forum: 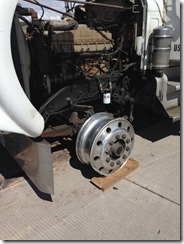 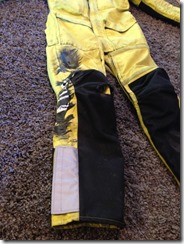 Last week I was returning from South Dakota on my BMW F650 GS.  I took my little bike and not the FJR so I could enjoy some dirt roads along the way and do some back country camping.  I was in Wyoming, traveling westbound on I-80, in the #1 lane (fast lane), at approximately 70 mph.  A big rig was in the #2 lane, at approximately 65 miles per hour.  I began passing the big rig to its left at a very slow speed wishing I had the power of the FJR to get the job done rapidly.  When I got next to the cab of the tractor its left front tire exploded causing the truck to make a rapid left turn directly into my lane.  I quickly swerved to the left and began to parallel the metal guardrail and brake rapidly.  I realized I had to clear the 53 foot trailer before being crushed between the big rig and the guardrail.  I knew that if I didn’t keep the bike up I would be run over by the rear tires of the trailer.  The big rig continued to move to the left.  When I was even with the rear dual tires on the big rig they contacted my right saddlebag (Pelican 1550 case) and pushed my left saddlebag against the metal guardrail.  I continued to brake and broke free of the tires and guardrail.  I thought I was in the clear until the left rear corner of the big rig’s trailer pushed my right handlebar forward.  The counter steering induced by the big rig caused the bike to go down on its right side at approximately 55 miles per hour.  My concerns quickly went from being run over by the truck to being run over by the cars behind me.  While I was sliding I rotated from my right side to a seated position so I could get to my feet and out of the lane.  As the sliding stopped I quickly ran from the #1 lane and jumped onto the guardrail.  Lots of nice people stopped to help and luckily a witness behind me saw the whole crash.  The trooper and the insurance companies all agree that the liability for the collision is on the truck so hopefully all will be well. 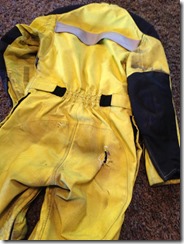 My gear consisted of a Shoei RF 1100 brain bucket, Aerostich Roadcrafter (original) with the standard armor, Aerostich Combat Light Touring boots, and some light weight Tourmaster leather gloves.  My Stich held up beautifully considering the speed of the slide.  The right side of the suit did melt a bit but did not go all the way though the suit.  While sliding on my butt I did burn through the back of the suit into my pants underneath, glad I wasn’t wearing chaps.  When I look at the impact my right knee took I am shocked that I have no pain due to the armor.  Had I been without armor I’m sure the knee would have shattered upon impact with the concrete roadway.  My right foot ended up with several broken toes when it was either run over by my bike or crushed under the bike during the slide.  The back of my right hand slapped the ground fairly hard sustaining a bit of light road rash as I burned through the back of the glove.  I don’t think I hit my head very hard on the roadway and there are some minor scrape marks on the right side of my helmet.  Other than that I’m good to go and glad I was geared up.

The Pelican cases on my bike are what truly saved my ass.  They are built to last and very strong.  Had the cases not been used I’m sure I would have sustained major leg injuries due to the impact with the roadway, guardrail and tires on the big rig.  I believe the Pelican cases allowed me to slide between the tires of the big rig and the guardrail and not get crushed.  The photo of the right case shows swirl marks from the big rigs tires.  The photo of the big rigs tires shows rub marks from the right case.  The right case also protected the bike during the slide and allowed me to ride the bike home to California.  The left case has scrape marks from the guardrail.