(NOTE: This rant was renamed "Defining Idiotic" with related editorial changes by my MMM Editor. I'm sticking with the original concept because it's more accurate.)

[Second NOTE: This rant marked the 100th time Minnesota Motorcycle Monthly published some of my crazy shit. This was not a rant I ever expected to see published. It was at the dead bottom of my slush pile of at least two dozen available essays. It fell into the category of "don't send anything you write while you're still pissed off." I can't guess why Bruce picked it.]

A few years back (June, 2001), I wrote a Geezer column called "Never Do That Again." The core of that rant was, "Over my 35 years of buying used vehicles, I've formed a collection of rules that, if I followed them, could prevent a lot of the usual used-bike/car misery. The first of those rules is 'never buy a motorcycle from a Kid.'" At the time, I defined "anyone under 40 is, more than likely, a Kid." It's a good rule. It should be followed relentlessly. Mercilessly. Without exception.

Insurance companies use this logic when they price any sort of insurance coverage for the high risk, mostly-braindead, under-25 crowd. They never screw up because they never deviate from the knowledge that Kids are a poor risk. They never delude themselves into believing a kid might be able to connect two synapses to make a conscious thought. I, on the other hand, occasionally imagine Kids might be something other than sperm and body-part donors. Usually, something interferes with my normal analytic processes and sinks the ship that usually floats my rational mind.

Another rule I usually apply to buying anything more expensive than a $1 meal is "Never buy anything you want." The logic behind this rule is that if you want something (read "want," not need) you will over-pay for it. So, I reserve the wanting for after I get the best possible deal. Once I have it and get it for my price, I can be happy with it.

This winter was long, painful, boring, and got as close as any yet to driving me south or into the desert for a long deserved and desired retirement. About January, I was sick of snow, below-zero weather, no motorcycles, and listening to idiot opinions over the television and radio and, especially, in person. Even worse, I was sick with the third flu of the season and about to sink into four weeks of depressing, suffocating misery.

In the midst of all that, I wanted an excuse for getting rid of 40 pounds of lard I'd collected over the past couple of semi-sedentary years. Mostly out of boredom, I started watching Craig's List for a bike I'd dreamed about since first seeing it at the Cycle World Show in 2008. I wanted a WR250X and it was going to be my diet goal: "Get to 180 pounds and you get to buy a WR." Sounds like a hopeless dream, now that I see it in print, but it was an honest attempt at self-bribery at the time.

As I was sinking into the delirium of 2010's Great Influenza, I stumbled on to a reasonably priced, used 2008 WR250X in Forest Lake. I hadn't yet figured out that my congestion was due to the oncoming flu and not my usual allergies to my wife's indoor weed garden and I thought I'd take a look at the bike. It took a lot of schedule-wrestling to catch the owner and set a time to view the motorcycle and, by then, I was really heading downhill. Finally, my wife and I drive to Forest Lake to see the bike and it was one of the few above-absolute-zero days in the winter of 2010. I got really stupid and gathered up my gear, imagining that I'd take the bike for a test ride and maybe even buy it. It wasn't that warm and, by then, I'd begun to suspect that my creaking body, leaking sinuses, and general miserable condition wasn't really indoor weed allergies. But if I have any skill at anything, I am good at ignoring danger signs. 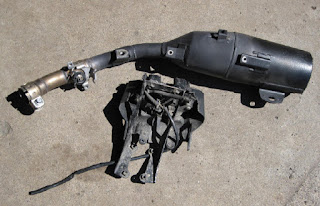 When I get to the owner's shop, I discover he has hack-sawed off the end of the exhaust pipe. He claims it was because a friend dropped the bike and bent up the pipe, but the cut was pretty clean and in exactly the spot a Kid would do damage in an attempt to camouflage lousy riding skills with lots of noise. Normally, that would have been enough to chase me away. Next, I discovered the Kid had deluded himself into thinking he was really tall and needed the suspension lifted artificially high. For me, it was unrideable in that condition. Normally, that would have been more than enough data to drive me back into the winter gloom. Finally, I discovered he didn't have the title on the bike and we'd have to meet 30 miles north where he'd use my money to pay off his loan. If any part of this deal sounds reasonable to you, you are either sicker than I was or dumber than I am. I put $250 down on the bike, got a hand-written sales receipt, and went home where I stumbled into the worst flu I've had in a decade. I even missed a day of work, something I hadn't done since 2001.

Eventually, we straightened up the paperwork, transferred the title, and he trucked the bike to my garage where it sat uninspected, unridden, and barely considered for a month and a half. Once the garage warmed up a little, I started looking over my brilliant purchase. When I got a good look at the mangled pipe, I knew I'd screwed up. A little further into the inspection, I discovered the rear fender extension and license plate bracket had been hacked "cosmetically." It always amazes me that idiot children imagine themselves to be superior engineers than the guys who designed and manufactured something as brilliant as a Yamaha WR250X, but human arrogance and stupidity are as common as hydrogen. 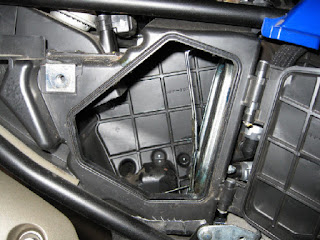 Finally, after finding a shade tree genius on eBay to supply me with a $50 replacement stock pipe and a "cosmetic expert" who provided a spare stock fender extension for even less, I had the bike almost back to working condition. After deciding to do a little of my own re-engineering with a larger fuel tank, I got into a full maintenance cycle on the cycle: oil change, chain tensioning and lubrication, packing the steering head and swing arm bearings, fork oil replacement, and eventually . . . checking the air filter.

Huh? The airbox is empty. No filter.

There are all kinds of stupid on this dying earth, but I had completely forgotten that there are people dumb enough to imagine a motorcycle doesn't need an air filter. I haven't met (until this winter) anyone that dumb since I was a Kid. I was 15 when I decided to pull the air filter from my father's 1954 Ford because it was so dirty the car wouldn't start with it installed. It didn't take long for that genius move to go wrong. It would have taken a lot less time for the WR motor go be chewed up by grit. I, obviously, don't know what the Kid did with my motorcycle sans air filter. I can only hope the motor is still mostly new. He only owned the bike for about a thousand miles and, maybe, he did this damage during the parked winter months. I can only hope. 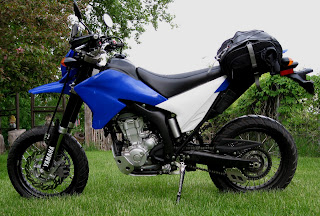 There is a lesson here for me, though. It's a variation on "never buy a motorcycle from a Kid." The new edition of that rule is "Never, ever, under any conditions buy a motorcycle from a Kid." There is, literally, no such thing as a "good deal" when the seller is a Kid. If you buy a Kid's bike listed for $5,000 in the Blue Book for $500, you're going to lose money in the long run. At the least, you'll spend $6,000 in mental energy fixing all the dumb Kid crap. My definition of "retarded" is being an old guy who buys anything from a Kid. I am, clearly, retarded.

Is tgis the same WR250X you hauled behind the RV last year? If so it must've worked out in the long run.

It is, it did. I spent some money getting the used oil analyzed for 4-5 oil changes and saw nothing scary, so I figured he didn't put many miles on air-filter-less. The bike is approaching 20k miles now.

You know this is the "r word" now, right? Your age and political incorrectness is showing.

Fuck a lot of "r word" silliness. The older I get the better I like offending as many overly-sensitive people as possible.