[Sadly, I’m not enough of a code writer to pull off getting the audio samples to work on Google Blogger. It took me forever to get them to work on my old website. Maybe by the time this posts, I’ll have it figured out, but I’m not holding my breath and neither should you.]

A few years back, Pat Hahn took a little of the Minnesota DPS's money and he and I did some testing of sound and motorcycles and cages. The test subjects were: my Kawasaki KL250 with a small aftermarket car horn installed, Pat's Honda VFR with the stock horn, and my Suzuki V-Strom with a Stebel Nautilus Air Horn Kit.

Our first test was to calibrate my recording rig by activating each horn in my driveway and recording the various levels, referenced to the loudest of the three horns. The Stebel claims to produce "139dB of sound." That is a meaningless claim unless we know what the decibel reference is; usually acoustic output is measured as "Sound Pressure Level" (SPL) which is referenced to the threshold of human hearing ( 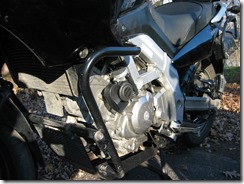 0dBSPL). I tried measuring the horn with my acoustic test equipment and found that the loudest output I could measure was a few inches from the horn, directly on axis with the horn's bell; 122dBSPL (unweighted). While the horn was connected to the bike's battery through a large relay, I considered the possibility that some voltage drop could be hindering the horn output. So, I directly connected it to a spare car batter; same measurements. I have no idea what calibration reference Stebel used. The Stebel horn has a dramatically more complicated (rich, more harmonics) signal than the other two traditional horns. That not only makes it appear to be louder, it creates a signal that can cut through more noise backgrounds than the other two samples.

Audio Samples of the Horn Tests

This first sample is our "driveway calibration" test.  Our first test for the horn demonstration/evaluation was to calibrate my recording rig by activating each horn in my driveway and recording the various levels, referenced to the loudest of the three horns. The first (loudest) horn is the Stebel, the 2nd is the Kawasaki, and the last is the Honda:  (the audio sample will take you to an MP3 player page)

So far, so good. With our "calibration levels" set, I moved the audio gear inside my 1998 Ford Escort Station Wagon (positioned so the microphone was in precisely the same position as it was for the first measurement. When you hear this recording, most likely you won't hear the 2nd two horns unless you crank up your system volume. The Escort isn't known for its acoustic isolation, but it does a pretty good job of shutting out the motorcycle horns.

With the same calibration levels, I started the Escort's motor (no air conditioning, no radio) and Pat fired off the three horns one more time. The Escort does a fine job of preventing the driver from clearly hearing the two normal horns and the Stebel is barely audible. The recording replicates what I head in the car. Discouraging. We'd hoped for something more impressive from our "139dB" air horn. I began to wonder why I put so much effort into the Stebel's installation.

Our next planned test was to drive the car down a neighborhood frontage road and record Pat honking the horn about 25' behind the Escort while I recorded him. If you listen incredibly closely, you might barely hear the horn over the car's interior noise. You can see Pat's following distance in the picture at right. He was close enough to make me nervous as I drove the car and managed the recording equipment. I, honestly, did not know he was honking the horn until I edited the recordings later and found the Stebel buried in the car's noise.

After the more useful applications of a horn failed us, we decided to see if a motorcycle horn was of any use in the best of situations; when the bike was right next to the car. On a moderately busy suburban street, Pat rode right next to my passenger window and honked his horn(s). 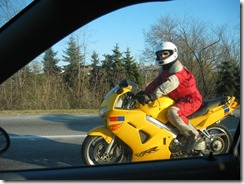 This is the Honda (pictured) recording in the lane next to the Escort. The Escort's windows are shut, but there was no air conditioning/fan or radio to interfere with the horn's signal.

This is the Kawasaki KL250 recording in the lane next to the Escort. Again, the Escort's windows are shut, but there was no air conditioning/fan or radio to interfere with the horn's signal.

This is the V-Strom/Stebel recording in the lane next to the Escort. Again, the Escort's windows are shut, but there was no air conditioning/fan or radio to interfere with the horn's signal.

Everything about this test was disappointing. Not only did we conclude that horns are scarce protection in any kind of busy urban or highway situation, but this test made us particularly aware of how invisible we are, sonically.

The whole "loud pipes saves lives" silliness is particularly defeated if a mid-frequency signal, designed to be directional and audible above road and vehicle noise, is unnoticeable. Most exhaust noise is low frequency and omnidirectional, so it can not be easily localized under ideal conditions. As all car drivers know, motorcycle exhaust noise is a generally irritating signal with no particular directional information until the motorcycle is in front of the car where more of the mid-frequency content is directed at the vehicles behind the motorcycle.

It should be obvious to any car fan that my Escort station wagon is close to one of the least acoustically isolated vehicles on the highway. We picked it for that reason. The Escort is lightweight, flimsy, and as far from air-tight as a basket. If horns were going to penetrate any vehicle, it should work on the Escort. We began the test in my wife's 2000 Ford Taurus station wagon, but even the Stebel was all but nonexistent in the driveway through the Taurus' bodywork.

Equipment Used in the Horn Test

I remember reading this article shortly after ordering a Stebel Nautilus air horn. It is still in the box on a shelf. Thank you for doing the test...

This last week was a nightmare on the road. Every single day somebody performed a stupid action (over and above the usual sillyness) that put my life in danger. On one day, someone tried to change lane on the motorway and occupy the same piece of road that I was using at the time. For only the second time in 10 years of riding I actually used the horn whilst riding. Fortunately I also used the brakes and ended up a few inches off the back bumper, rather than getting broadsided. I could barely hear the horn myself and it was only a mirror full of Yamaha GTS1000 on full beam the finally alerted the driver to their carelessness. The only other time I've used the horn was also on the GTS and was more effective. As I rode down my street, I spotted someone in their driveway with reversing lights on. I slowed with the suspicion that they hadn't seen me. They hadn't and I had to stop as they reversed out. I had stopped well short, but that space was rapidly disappearing. Still in gear and not knowing instinctively knowing where the horn was I revved the engine and tried to make some noise with the non-stock (louder, but not neighbour unfriendly) exhaust. This had no effect, but I eventually found the horn and the car stopped before an acknowledging hand hand appeared from the open window.

The horn is often the one item I regularly have trouble with on the annual MOT inspection. It's usually the only time it's ever used!

I think we're all proving what a useless warning device noise is. Sound is slow-traveling, omnidirectional, non-identifying, and omnipresent in a typical traffic situation. No part of that would qualify as a useful protection device.