More of the Usual 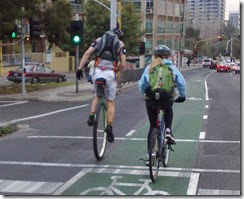 Coming back from Chanhassen Wednesday night, I ended up beside a unicyclist (not the guy in the picture, but a guy like him) apparently commuting home from work. I don’t think I’ve ever seen these things outside of circus acts and closed course demonstrations. Since we were traveling on a busy neighborhood street, I sort of looked forward to seeing him stop and start the thing. So, I plugged along at the speed of the general traffic and waited to see how he would handle a stop light. I should have known. He ran the first two he came to, weaving through cross traffic, getting honked at, and expecting drivers to compensate for his crippled vehicle and marginal skills. The third light was a much busier intersection and he made a hard right on to the sidewalk, forcing a couple of pedestrians to dive out of the way to keep from being run over. As I entered the intersection, I saw him dive across the street, reverse directions on to the opposite side sidewalk, and wobble his way back toward the street we’d been traveling.

So, like lots of motorcyclists, this guy couldn’t stop in any sort of emergency situation. He would probably tell you, “I’m fine as long as I’m moving,” but he’d be lying. He’s not fine, he’s an out-of-control unicyclist waiting for a crash. I fail to see the attraction to disabled vehicles. A decent bicycle is all sorts of capable in a variety of traffic situations. A standard or sport or dual purpose motorcycle can go most places safely and competently. A unicycle is a clown’s prop. Something trendy Minneapolis uptowners will play with for a few days or weeks until they end up smashing into a moving vehicle or pedestrian and we’ll hear the whine, “They jumped out in front of me.” Cruisers are slightly modified wheelchairs with less-than-competent handling, non-existent suspensions, pitiful ground clearance, and more mass than John Candy and his stunt-double combined.