The RV Era Is Dead 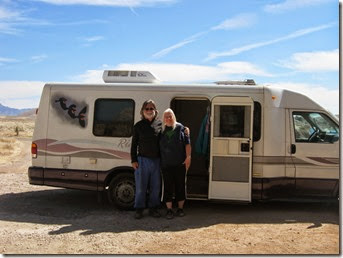 When we got back to Minnesota this spring, I put the RV up for sale on Craig’s List and dug into the business of getting our house ready to sell and eliminating three decades of accumulated stuff (or “shit” as George Carlin would describe it). The Craig’s List ad pulled in a few prospective buyers, but the asking price ($28,000) thinned the herd a lot. After getting our 2013 income taxes out of my hair, I went back through the Rialta and tweaked everything I could think of with the intention of hitting the road with the RV this winter. Electronics sorted out, new tires, fresh fluids all around, and a solid cleaning to get the New Mexico grit out of the vehicle, and we were fully vested in doing a similar trip this winter. I’d kept the “for sale” sign on the back window since January, sort of as a reminder and partially because a die-hard Rialta fan kept telling me “If you want to sell it, take it camping. Every campground I visit gets me a visit from someone who wants to buy my Rialta.” I wanted to test his theory with an actual attempt to sell our Rialta, but we didn’t attract a single buyer in 6,000 miles and a dozen different campgrounds. My wife, Elvy, on the other hand was convinced we needed a different kind of vehicle. “I want a truck,” has been her mantra for months. So, we kept the sign on the RV and renewed the Craig’s List ad every few weeks and kept on keeping on with our plans. Recently, those plans began to include the scary idea of buying a home in Red Wing before we unload our Little Canada mini-farm. That meant we needed to liquefy some cash. 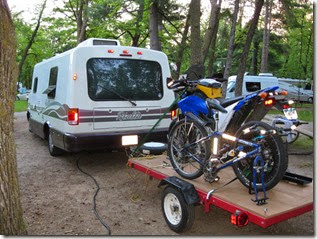 Three weeks ago, Elvy took a couple of calls on the ad and decided Craig’s List mostly attracts flakes. She called an old friend, Perry, who owns Roseville Auto Repair and asked him if we could park the RV in front of his shop for a few days. Perry thought it was a great idea and we moved the RV to the corner of Hamline and County Road B2, right across from the Roseville Library. Within a few days, the quality of our calls rapidly improved. Perry must have handed the keys to a couple dozen customers who wanted to inspect the RV. We got four solid interested buyers in the second week. Monday, we sold the RV. We didn’t get the whole asking price, but what we did get meant owning our Rialta for a year-plus cost me $1.69 per day or $0.08 per mile or a total of $763 counting all repairs (not including my labor), fuel costs, maintenance, and upgrades and improvements. Considering the dire straits we were in seven months ago, not bad. The Rialta rolled out of our driveway with all systems working, sparkling clean, and having averaged 17.16mpg for 9713 miles. Our best was 22.91mpg and the worst was 13.41 when we were exclusively driving between Elephant Butte and Truth or Consequences, a 5 mile one-way trip with lots of in-town driving.

As usual, I had mixed feelings. We took a great trip to North Dakota in July and it would be hard to replicate that experience with any other kind of RV. We were in all kinds of camping situations, from parked on a country road to a full service state park or being in the middle of a Fourth of July party in Bismarck. The van ran perfectly, the new fat tires might have cost a few mpg, but we still got about 17mpg for the trip. Everything about that trip was exactly why we’d bought the Rialta in the first place. Spontaneous, economical, flexible, and incredibly comfortable.  What the hell are we selling it for? 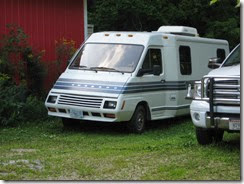 Yesterday, I rode the V-Strom to Red Wing to meet a contractor to get a bid on repairs for one of the houses we’re considering. On the way back, I spotted a “Rialta” next to a rural farm building. I turned back to get a better look. It wasn’t a Rialta, it was a previous version called the “LeSharo.” This was Winnebago’s first attempt at a small, efficient camper with a Fiat (I know) power plant. Mostly, the vehicle was pretty awful because of the usual Winnebago problems and the obvious “Where do you get a Fiat serviced?” problems. The answer is, you don’t. The owner of this vehicle had pretty much given up on his RV ever moving again. The only practical fix is expensive, a total driveline replacement with Chrysler and custom bits. Like many of the RVs we saw abandoned in Truth or Consequences, this LeSharo will slowly turn into a storage shed for crap until it’s full and the whole mess gets hauled away for scrap. 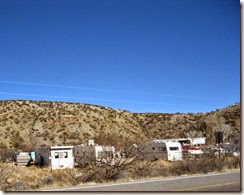 Most of my mixed feelings went away then. Other than the North Dakota trip, our RV sat in the driveway unused for most of the spring and summer. Camper trailers are more suited to long periods of disuse. Vehicles need to be driven. You can jack a trailer off of the tires and just use it as an office or spare bedroom. A motorized RV isn’t anywhere near that flexible. If you’re gonna have one, you gotta use it. If you can afford to let a $20k-100k investment deteriorate into a rusting shack, you can afford plane tickets and motel rooms. No motel will ever get away with dropping a surprise $8,000 repair bill on you, unless you are Keith Moon (and you shouldn’t have been surprised then). I think we learned this winter that we’re not ready to use an RV enough to justify owning one. That’s a little disappointing, but the lesson could have been a lot harder learned.

We had a Rialta a few years after Winnebago came out with the camper. In 60,000 miles, transmission failed twice, had the timing chain cam fail and cause near-catestrophic engine damage and the camper left us stranded in places where VW doesn't exist (which is most of the country) a half dozen times. Finally, the second transmission failure broke the camels back. We left it with the mechanic and drove a rental car to the airport and went home. I think I would be afraid to calculate what our cost per mile would have been. You were lucky.

This post is fairly famous on the Winnebago Rialta sites, mostly because it angers people that you are costing people resale money. I was one of those people for two years, two years of constant problems and vw's lousy, incompetent service. This summer I took your example to heart and parked the Rialta in front of a friends service station. It sold for a little less than I was asking for it and I have now joined the group who say "The two best days in my life where there day I bought my Rialta and the day I sold it." Thanks for your honesty.

I wish it weren't true, but I did not exaggerate a single thing about my Rialta experience: from the great layout and comfortable camping experience to the terrific technical support I received from Rialta owners' groups to the total incompetence from all aspects of "VW's Service Organization." I'm glad you were able to unload your money-sink, I'm sorry it took another sucker for that to happen.