Taking Names and Doing Something about It

Last week, I was at a meeting in Minneapolis at the Metrodome Holiday Inn. I rode my bike to the meeting. As I tried to fumble my way into the hotel's parking structure, a guy ran up to tell me motorcycles aren't allowed in the hotel's parking area.The guy ran me through the usual reasons why the hotel didn't allow motorcycles entry into the structure, but it summed up to the fact that the hillbillies who designed the ticket gate are using 1945 technology to sense the presence of a vehicle and when that badly-designed system fails it often drops the gate on the bike or biker. So, for "liability reasons" the gate manufacturer stamps a "no motorcycles" sign on their crap and the parking garage owner complies with that instruction rather than look harder for a piece of equipment that wasn't designed by Fred Flintstone. 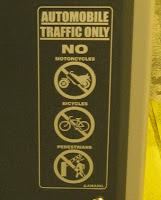 After a few cars backed up behind me, he "remembered" that the hotel had a designated motorcycle parking are just to my right (the drainage slope designed to prevent cars from going around the gate). For $4, I could park my bike where most anyone walking into the parking structure could mess with it and where it took some near-off-road skills to maneuver the bike into the space and even more skill to get back out of the parking lot. The exit route was to ride up that slope, make a hard left turn (while still on the slope), dodge between the gate and several concrete barriers, and make a hard left out of the lot into other exiting traffic. Getting on and off of the V-Strom was a little tough, but the riding part of this parking and exiting exercise was no problem. For other bikes, like big touring bikes or hippobikes, the parking and the exiting would probably be exciting.

A couple of days later, I received an email about some kind of political boycott over some mildly obscure issue and it struck me that we're a pretty substantial economic group. If, for example, all 180,000 Minnesota motorcyclists decided to stay away from all businesses that don't allow us access to parking we could do some damage. I don't mean just when we are riding but for all business activity. If, for example, all 180,000 Minnesota motorcyclists took their business out of downtown Minneapolis and St. Paul (where pretty much every parking garage has one of those damned signs) we could cause some folks to revise their "liability reasoning." Now there is something for ABATE to sink it's teeth into that would actually benefit motorcyclists.

There are options, too. There are companies that use technology that will not only sense a motorcycle but pedestrians. This was a choice made by the management of these facilities and one that should cost them some cash as a result. Just for laughs, I'm going to start taking pictures of the parking signs and the buildings and businesses that ban motorcycles. I'll post those here and if you want to contribute (not just Minnesota, but let's put all of those businesses on notice). Send them to me and I'll stick them up here, too. Power to the people, as long as the people are us.
Posted by T.W. Day at Saturday, May 05, 2012

We have this kind of gate where I work. The sign in your photo looks identical. It works fine with motorcycles. Even my little 250cc Suzuki.

I have had a similar experience with paid parking where the attendant would not let me in.

I'm one of the lucky ones I guess. The ramp where I work has an unwritten policy for bikes where we ride around the gate and park in the corners so we don't use a normal spot. We just leave through a card controlled exit, riding around the gate. Free parking downtown is a real incentive to ride.

This one is in the basement of the Scientology Building (not where I work). It doesn't work at all for any motorcycle smaller than a hippobike. I just ride around it.

My current pet peeve are the latest rage in many downtowns--the parking tickets you have to purchase from a vending machine and must be displayed "on your dashboard." How in H*ll is a motorcycle supposed to be able to use those things? Sure, maybe you can clip it or tape it to something, but what is to keep someone else from just snagging your ticket to get free parking?

To Anonymous -- I sent a complaint to my town about those. They commented that they hadn't thought about the problems motorcycles would have (not a lot of people park their bikes downtown), and pointed me to a few places where people rarely park that still had regular meters. This spring, they replaced all the ticket-dispensers with computers that let you type in what space you're in, and then track that.

I called to thank them for the change, and they said they'd put a note in their filing system to think about how things would work for motorcycles for future updates. So a politely worded complaint can sometimes actually change things for the better!


As a more time-sensitive response: I dealt with the tags by fastening two pieces of plexiglass together with caulk as a spacer on three edges. I drilled a hole through the fourth edge big enough to run a cable lock through, and I just dropped the ticket in before locking up the bike. As long as I left the opening pointed down, it kept the ticket dry if it rained, and someone would have had to cut the cable to steal the tag. It took about 20 minutes to build, the town accepted it as legal, and it cost about $10, with a lot of plexi left over. It was a nuisance, but not too bad to use.

That tactic has been tried and failed in Duluth. The town's city council is stuffed with suburban merchants and their shills and they are determined to kill downtown Duluth to force trade to the 'burbs. The problem is the downtown trade is all tourism and no tourist wants to hand out at a mall. I used to visit Duluth's Harbor Park a dozen times a year and haven't been back for a long while since those meters showed up.

Near me they did come up with some waterproof box you can purchase that bolts onto your bike and displays the parking ticket, but it seems like a lot of hassle and expense to be able to park and if you travel, different places have different size tickets, and when you're not there you have this box bolted to your bike. I'm not sure how they expect tourist motorcyclists to handle things. It is basically a "stay away" from our business district sign for visiting riders.

I work in the parking industry. And know the manufacturer of the gate you have pictured. The reason that sticker is on the gate is because of liability. The gate manufacturer, and the company operating it do not want the liability. And since this is a lawsuit ridden society, if anything were to happen, they could lose a lot of money. The loop detection system used in that gate is the same as one designed for a stoplight, and have variable sensitivity. maybe stoplights need a tech upgrade too..

Stoplights are so hillbilly that states have had to pass laws to allow motorcycles to "proceed with caution" because the 1930's induction loop technology doesn't sense bikes. Good thing there are companies who have joined the later end of the last century and have included optics in their technology, otherwise all of you characters would still be banging the rocks together.

Liability happens when a company uses crap technology to solve a problem. While your companies don't want liability, the rest of us don't want anything to do with vendors who disallow our vehicles.