When I finished my test ride of the Honda Custom Interstate, I was hurting, tired, and frustrated. All of this misery was not because of anything specific to the VT1300, but generally due to all of the flaws in the design philosophy of a cruiser. The weight, length, awkwardness, and anti-ergonomic design of that style of motorcycle contains none of the things that I love about motorcycles. I've said this before, if this was the only sort of motorcycle I owned I'd probably ride fewer than four or five times a year. If that sounds familiar to you, maybe you own the wrong motorcycle.

In response to the often-screeched complaint that I'm a "motorcycle bigot," I have to say "fuck you." I also have a personal "no assholes rule," if that applies to you, deal with it. This isn't about religion or race, it's about bad design. I am too old, too beat up, and have too little time to tolerate assholes in my life and, likewise, I'm not particularly interested in lousy engineering.

That is the real problem, for me, with the cruiser style; it's all about fashion not transportation. Unlike those gaywad old fat guys who imagine that an expensive motorcycle actually changes who they are or how silly they look, I know that no motorcycle is going to make me young, rich, smart, fast, or sexy.

Like the guy with the undersized dick who was asked by a hooker, "Who's that going to satisfy?" All I have to please is "me." And there is nothing about riding toward a eternal gynecologist appointment that makes me happy. Sitting on my tailbone in an unrelenting fixed position would drive me to stop at every "biker friendly" bar if I were inclined toward addiction or using alcohol for pain relief. Riding straddle-legged is something I gave up when I quit riding horses, sometime in the early 1970's. Even more, sacrificing personal safety for fashion with no aspect of enjoyment involved is totally out of my interest or capacity.

Hippobikes are freakin' terrifying. They can't turn, can't stop, can't go off-road, and are so freakin' close to the ground that the rider can't see over or around anything taller than a go-cart. What idiot thought that made sense? We're not talking engineering here, this is "design" at the lowest level. Motorcycles as women's shoes.

Riding the big Honda so put me off that, after I ended the test ride last Friday afternoon, I didn't get back on my own motorcycle until the next Thursday. It effected me so strongly that I didn't get comfortable on my beloved WR250X until I'd been on the bike for more than an hour. It took me that long to regain confidence that what I was riding could stop, turn, and competently be maneuvered in traffic. No wonder so many hippobike owners whine about how "unsafe" the freeway is. If I had to ride the crap they ride I'd be afraid of my own neighborhood. 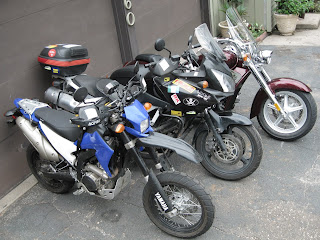 A while back, I wrote an article called It's Not a #&^%#@ Wheelchair. Turns out, I was wrong. This kind of motorcycle is barely up to the standards of wheelchairs. Check out the comparison at right. All three bikes were backed up to the garage door, to make dimensional comparisons easy. In every measure, except length and mass, the VT1300 is a kid's bike. The incredible extra length is nothing but a detriment to maneuverability. The weight is to provide something for the owners' $14,000.

After my cruiser experiences, I sort of have sympathy for the guy I described in Why We Die So Often, "Whether by design, inability, or inattention, the cool cruiser guy didn't make the slightest move to avoid the oncoming cage. He didn't even cover the clutch, let alone the brake. He didn't swerve or slow down, he just stared at the cage as if he was Darth Vader and the cager was one of those Return of the Jedi teddy bear things. He just clung to the bars like a pair of streamers, glared at the cager as he rolled past, barely clearing the wagon's bumper." That's exactly how I felt in heavy traffic on the VT1300; almost as helpless as a passenger or a bumper sticker. The fact is, you can't do much when you are hanging on to 1000 pounds of lumbering iron. That sympathy is no different that my feelings toward squirrels crossing the road in traffic, though. There was nothing wrong with the damn tree they were in before they decided to test the asphalt. Likewise, only an idiot would pick a motorcycle that isn't road-worthy. There are too many squirrels and idiots in the world and this is how nature sorts 'em out.
Posted by T.W. Day at Thursday, September 01, 2011