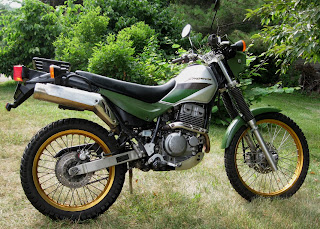 Last night, I sold my 2000 KL250 Kawasaki Super Sherpa. The buyer was an older guy who showed up to check out the bike on a big Kawasaki cruiser of some sort. (Sorry, they all look alike to me. He told me what it was, but I just don't care.) He took the bike for a long test ride, both on the street in in my backyard "test range," we haggled a bit, he put down some money and said he'd be back the next day with the cash.

The next morning, he called and wanted me to put all of the LD stuff on the bike for him so he could see that it all fit. I didn't express a lot of motivation. It felt like he just wanted to jerk me around. Later that day, he called and said he was having second thoughts and didn't want the bike after all. I had three other buyers who I'd already told the bike was sold. I've already deposited the deposit check, so giving him his money back is out of the question, at least until the check clears. He seemed to think that was unfair. Not having been in this position before, I don't know what to think.

Oddly, other than the hassle and wasted time, I'm sort of relieved. I had some alternative plans for the Sherpa that I wasn't all that happy about canceling. On the wild chance that my grandson gets over teenage angst and decides he wants to ride a motorcycle, the Sherpa would be hard to beat. I sort of thought about keeping it around as a backup bike for when friends need a temporary ride. It is an insanely fun motorcycle around town and sometimes gets nearly 100mpg.

Like most carbureted motorcycles, it's a pain in the ass to start in the winter and starting is not all that reliable anytime the temperature gets below 40F. I think that's fixable, but so far the fix has eluded me. So, for the time being it's still a project bike. I might put it right back up on Craig's List, but I'm in no hurry at the moment.

I've heard of this kind of funky transaction, but this is my first experience with a sale that turned into no sale. What do you do with the deposit? I've been on the other end of this sort of transaction before, but it never occurred to me to renege on the transaction once I have said "I'll take it." Must be a cowboy thing.
Posted by T.W. Day at Monday, July 11, 2011