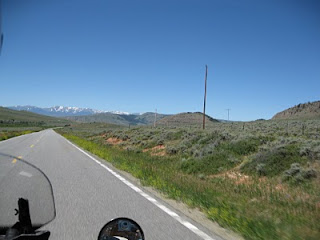 I thought about this fact as I rode across parts of the Rockies in July. In a discussion about alternative transportation systems, Kevin Cameron wrote, "The Japanese high-speed trains tear up their roadbeds so rapidly that track alignment machines have to make frequent passes. Such machines put down big hydraulic elephant feet, grip the rails, and then using vibration jerk them into better alignment. Those trains are more of a hood ornament than a practicality - like the Moscow subway."

As I rode down well-maintained highways in rural South Dakota, Wyoming, Colorado, and Utah and passed through hundreds of miles of "men at work" sign-dotted roads under repair, I wondered who's system is really a hood ornament? In the United States, we dive off of the deep end of rationality to protect individuality. We use massive taxpayer investment to protect the "rights" of the few individuals who can afford to live and work in places that have little-to-no socioeconomic justification. These highways require constant maintenance and every couple of years they are ripped up and rebuilt, mostly because the earth itself tears them up. 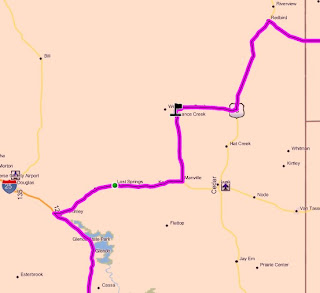 One Wyoming path we traveled constantly brought me back to the conversation with Kevin. It started with US18 at Redbird, turned into WY 270 toward Lance Creek, and ended back on US18 through Lost Springs and eventually reconnected us to I25 at McKinley. 91 miles of nothing: no population, no industry, no traffic, and damn little justification for a well-maintained road. On top of that economic insult, most of the 270 section had been gouged by someone dragging a piece of equipment down the middle of the west-side lane, cutting a 1-2" deep, 8" wide gash into the asphalt. This section, in fact, is where I began to suspect I had a suspension problem. Each time I crossed that gouge, the bike "skipped" its front tire across the damaged section and chattered for several feet until settling down.

The technology required to build and maintain a road in this abandoned place is unjustifiable. If a system that has transported 6 billion people is a "hood ornament," what is an investment in rural highways that probably wouldn't serve 6 billion people in 6 million years? At best, this area might deserve a gravel road maintained by the taxpayers of the county and state. It might be inconvenient for the local farmer(s?) to have to drive something less manicured than a personal interstate highway, but since it wouldn't matter at all to the rest of the country if this inconvenience turned into a disaster I have no interest in that justification.

Roads like this are nothing more than the result of pork-barrel politics and they exist all over the country. As a taxpayer, I resent them. As a motorcyclist, I really resent them.

The only traffic I saw in nearly 100 miles of this route were three motorcyclists; one traditional Harley couple and a pair of adventure touring BMWs. We passed the first Beemer about 10 miles into US18 and the second in the middle of 270. I was southbound, the BMWs were northbound, so I didn't have much opportunity to watch their interaction with the road. The Harley couple were, like us, heading toward Colorado. Wolf took some pictures of them, while they were in front of us, but they turned out poorly so they've hit the digital trashcan. Honestly, they seemed to be struggling with the wind and the occasional corner, but that's probably just my biased view. They were, however, traveling about 15mph below the speed limit, so we didn't spend a lot of time behind them.

I can't speak for the Harley pair, but I suspect the BMW riders were like me; picking an out-of-the-way route hoping for a little challenge. Instead, what we got was a manicured (if recently damaged) two-lane personal freeway that was hardly challenging and rarely interesting. Wolf and I had a few disappointments like that on our trip. Several of my favorites, including Pike's Peak, that used to be interesting, challenging gravel or dirt roads are turning into expensive, well-maintained, paved highways. If there is any road that rivals the Tōkaidō Shinkansen as an overpriced hood ornament, it has to be the highway to the top of Pike's Peak (or Mt. Evans, which has been paved to the top for decades). The girlymen of the world are ruining all the good rides and I am sick of it. It's time to put a little cost-justification into highway construction (Republicans would call that "rationing") and ask a few reasonable questions before setting the asphalt fascists loose on every backroad in the country.
Posted by T.W. Day at Saturday, August 07, 2010

I'm not sure I'd agree, at least here on the East Coast. With budget cuts at all levels of gov't a lot of roads are in terrible shape. I hit a pot hole that nearly killed me (in a car) on the Mass Turnpike at night, in the rain, while passing a tractor-trailer rig. If I had hit that thing on a bike it would have been bad news. Around here cornering line is determined by which road hazards you want to miss: potholes, tar snakes, dirt, crap, gravel, etc. But, don't worry, our continuing economic decline will surely be coming your way and your roads too will deteriorate.

We have all of that in the Cities. Where the traffic is the highest, we have the worst roads in MN. In uber-rural places like the ones I described in my column, the roads are great. It makes no sense at all, but we're humans and we rarely make sense.

Our rural roads are just as bad if not worse than the urban ones, except they thrown in tricky and dangerous maintenance more often. New York has bought the absolute slipperiest tar for making snakes and they use it liberally. Frequently you have no choice but to pick your line through the least worst section of snakes. They particularly seem to slather this stuff around on blind corners. Another favorite is to fill in some mud hole with the coarsest possible gravel, which promptly gets washed all over the road during the next rain storm. Recently the power line crews have been out sawing down limbs and leaving lots of little sticks and sawdust all over blind corners. One stretch of Rt. 9 in upstate NY has somehow sunk into a repetitive wave pattern between joints that sets your cycle into a rythmic leaping motion at the speed limit. The only way I could control my bike was by riding 20 over or 20 under, but at 20 over I spent half the time in the air like doing motocross. Really, anytime I happen upon a well maintained stretch of road (usually short lived) I consider myself lucky and enjoy the experience.

Interesting comments. I put in several hundred miles on upstate New York rural roads two years ago. We, apparently, have dramatically different opinions of what is "tricky and dangerous." I thought New York roads were pretty much the same as what we have here and that they are overkill for the minimal traffic they encounter. Of course, my preference would be to not waste the energy or resources paving such roads. I'm good with dirt, clay, or gravel roads in rural locations. I don't think there is a rational reason to pave roads that experience such minimal use.

Hey, where've you been? Riding someplace interesting I hope.

I've been playing grandpa. My youngest daughter gave birth to my 3rd grandkid, Weston Robert, on Monday. My wife and I flew down to meet him over the week.