Hardly's new ad campaign spouts brilliant prose like:
At H-D.com/freecountry you can read brilliant and highway-friendly comments like,
For a change, the above spelling errors and crazed grammar are not mine. I just wrote 'em as I read 'em. There are hundreds of similar and much crazier sentiments on the site. I'm not sure what Harley was intending, but what they provided was a boatload of justification for the general feeling that Harley owners are less-than-brilliant and somewhat unstable.

Buell's last ad was particularly sad and, unintentionally, informative: "Many people were happy Buell had a stellar AMA season. Then again, many poeple were disturbed by it." Apparently, some of the disturbed were the Harley executives who couldn't figure out how to market a motorcycle after years of selling life-style.

Buell, of course, is dea 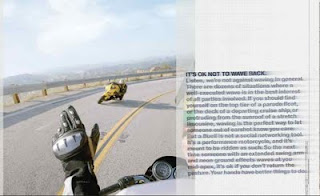 d. Harley dumped the Troy, WI division in mid-November. On their way out, Buell's marketing department left an interesting mark on motorcycle etiquite with their "It’s ok not to wave back" ad from the company's 2009 October magazine campaign. Lots of motorcyclists took issue with the knee-dragging street rider who is too occupied with dangerously pretending to be a racer to acknowledge a fellow rider. To me, that raised hand might be a warning rather than a wave. As in, "Slow down, douchebag. The road is about to surprise your squidly dumb ass." The non-Buell rider is obviously armored up and at least as capable as the wannabe road racer.

I can't say I'm a 100%-waver. I often wave or nod my helmet at other riders. I usually ignore parades of motorcylces. I'm too busy trying to figure out where they are going so I can go somewhere else. I probably wouldn't wave much when I'm winding my way through two-lane Rocky Mountain roads or wrestling the V-Strom through deep gravel. Some places, motorcycles are common enough that waving gets out of hand. In Minnesota, that's rarely a problem. For me, it's a reflex more than some kind of social comment or statement of solidarity. When I started riding, I saw another bike on the road or trail about once every zillion miles. So, it just felt natural to acknowledge the existence of another nut on a motorcycle. I've been doing that for so long I don't even think about it at this ripe old age. Some motorcyclists are so far outside of the group I'd consider to be among my peers, such as the packs of gangster-posing, loud pipe, traffic-jamming parades or Buell's knee-dragging example, that it doesn't occur to me to bother waving. Folks who are risking my life or rights don't engender a feeling of solidarity.

Marketing is all about coming up with a glib one-liner that convinces the sheeple to part with their money. Sometimes glib and irresponsible are closely coupled. These days, I really miss Honda's old "You meet the nicest people on a Honda" tactic. I can't help but wonder if the boom in ridership that US motorcycling experienced during the 70's wasn't in some part assisted by the crazy idea that normal people might ride a motorcycle? In fact, a whole lot of very normal people got into motorcycling at that time and many of them are just now approaching the time in their lives where their physical abilities aren't up to the task. When those folks leave motorcycles for motorized wheelchairs, who is going to take their place?

If the industry is lucky, the kids on Suzuki's V-Strom, Kawasaki's Versys, and Honda's new NT700V sport-tourer are the future. (Yeah, and the no-dead Buell Ulysses almost fell into that bracket, the last US-manufactured motorcycle I ever considered owning. If Buell had lasted long enough to put a decent motor in the Ulysses, I'd have bought one to replace my V-Strom. I guess I'm lucky they died when they did rather than after I'd spent my money.) The future of motorcycling, I think, is in efficiency, versatility, and adventure. Look at the bikes the Big 4 are selling all over Asia and Europe and you'll see that big, fast, inefficient, and impractical are American-only engineering goals. The rest of the world wants motorcycles and scooters that are stingy fuel users, fun, quick (not powerful), practical, useful, and cool looking. We can only hope that something inspires young Americans to want something similar because, otherwise, motorcycles are going to be a thing of the past, industry-wise, here.

In fact, that segment of the motorcycle business is down more than 65% and outside of industry magazines, nobody cares. That's no formula for longevity.None of those manufacturers make anything resembling an efficient motorcycle. The closest thing to fun you can get riding a hippobike is found when you park it and step into the bar for beer. Adventure? Get serious. while it's an adventure trying to turn or stop one of these monsters, you'd never take one someplace that wasn't level, paved, and well-populated. All we're left with are companies that build huge 1950's styled and engineered monuments to the nation's past engineering skill and habits. If American car manufacturers stuck with that formula there wouldn't have been anything left to bail out. If HD, Victory, Indian, and Big Dog all went bust tomorrow, it wouldn't amount to a blip on the US economy.

(I wouldn't be surprised if I'm forgetting somebody. Since they all build the same bike, I'm probably forgetting several. I can't find the motivation to care.)