The Boys Have Done It Again 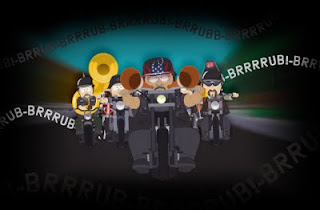 As with their brilliant analysis of several religions, terrorism, imigration, and other complex social issues that haunt our culture, the Boys of South Park have done it again with analysis of the loud pipe mentality: The F Word. The English dictionary has been revised to accurately utilize a word that has long been marginalized.

Fag {fág} n. 1. An extremely annoying, inconsiderate person most commonly associated with Harley riders. 2. A person who owns or frequently rides a Harley.

It's "Episode 1312: Everyone agrees they've had enough of the loud and obnoxious bikers that have arrived in South Park. The boys are taking on the Harley riders. They throw down the F word and the game is on."

I feel better about the state of the nation, the world, and the universe. Way to go Big Al. And a big "blubblubblubblubblubblub" to you Hardley riders.
Posted by T.W. Day at Thursday, November 05, 2009

I've got a friend who rides a VTX with straight pipes & loves South Park. We've never agreed about loud pipes. I can't wait to drop "metric fag" on him!

Any biker who thinks this show was funy deserves to die.

Hey funy (sp) guy, are you a Hardly fag or a metric fag? Can you hear anything besides the ringing in your ears?