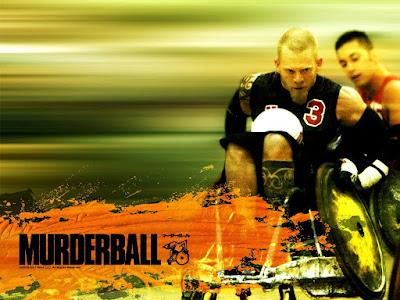 "Whether by car wreck, fist fight, gun shot, or rogue bacteria, these men were forced to live life sitting down. In their own version of the full-contact sport, they smash the hell out of each other in custom-made gladiator-like wheelchairs. And no, they don't wear helmets." After watching this movie, I shipped off a quick note to a friend recommending Murderball. His instant comeback was, "What the hell is Murderball?"

Seconds later, his second question appeared at my Inbox, "Why the hell would I want to watch that?"

This review is all about my answer. I wish this could be a shorter answer, but the more I thought about my response the longer it became.

First, I couldn't help but feel that a mutual friend of ours had all but starred in Murderball. If Mark Zupan (the guy on the DVD's cover) isn't, our buddy, Tex's clone (or the reverse), I truly am getting better, not older. Mark Zupan is even a Texan. (Don't let that turn you off, Zupan is one of the weirdest inspirational characters ever committed to film or video tape. Our man, Tex, is a little unusual, too.) Zupan is balls-to-the-wall, mostly always pissed off, and afraid of nothing. His message seems to be "I've been through hell and hell is worse for the experience." Zupan and some of his Murderball buddies visited the Jackass boneheads and did some damage there, too. That Jackass episode is on the DVD and it's about as insane and funny as that moronic program has ever been. Both the movie and the Jackass scenes gave me flashbacks to Tex describing how he ground off his finger at the racetrack. Only one guy could make that story funny.

Familiarity aside, there is some motorcycle content, in case you think I forgot what venue I'm writing for. Late in the movie, we are introduced to Keith Cavill, a kid who became quadriplegic after a motocross accident. [You knew that was coming all along, didn't you?] What makes this a motorcyclists' movie is that no more is made of the motorcycle's involvement in the injury that any of the other causes that put these guys into their Mad Max wheelchairs: car crashes, childhood disease, random household accidents, or teenage mayhem. It's what they do after they become "disabled" that makes the film inspiring and compelling.

The story is about the guys playing for the Team USA Quad Rugby in the 2004 season. That's a little odd, since quad rugby was, originally, a Canadian sport. However, the movie's conflict is between ex-US-champion-turned-Team-Canada coach Joe Soares and Zupan (representing Team USA and that organization's political underbelly and passions). Zupan and Soares are such similar personalities that a lot of the comic relief comes from watching them pretend they have significant differences. Zupan thinks Soares is a "traitor" since he took his experience and knowledge to the competition instead of vanishing gracefully into sports history. Soares thinks Zupan is a loudmouth brat who ought to mind his own business.

Soares, first, is not ready to retire and, second, has good reason to believe that he has been treated disrespectfully by the US organization. Soares family moved to the US, from Portugal, when he was 11. Polio took away the use of his legs and a good bit of his upper body functions. After being cut from the US team and being "forcibly" retired as a player, he tried to find a way into the US program without success. His efforts created a lot of bad blood between him, the US players, and the US team management. So, he moved to Canada and took on that team's coaching job. The film describes how that worked out for the Canadians.

Zupan was an all-around Texas teenager, excelling in sports, debauchery, and drunkenness. After drinking himself into a coma and falling asleep in the bed of a friend's pickup, he awoke to find himself clinging to a branch in a Texas marsh after being thrown from the truck when it crashed into a fence. A half-day later, he was rescued. Suffering a broken neck, Zupan found himself in a hospital, quadriplegic and pissed off. Somehow, he focused that energy into Murderball and became the US team leader. Zupan is a seriously scary dude. He was recently in the Cities promoting his new book and he's even scarier in person.

The final game of the film, the 2004 Para-Olympics Quad Rugby quarter finals against Joe Soares' Canadian team, provides some of the best sporting event film editing I've ever seen. This is a complicate game, with strength, stamina, and punishment equal to anything you've ever seen; but it's all performed on wheelchairs. Turning that into a spectator perspective that is compelling, let alone exciting, is a technological achievement equal to anything you've seen on film. In the end, both teams were upset by New Zealand. In the first ever defeat of the US team in Quad Rugby, Canada got the silver medal, the US finished in bronze, and New Zealand, brought home the 2004 gold medal. If you're a nationalist homer, that's probably a letdown, but there are no bad guys in Murderball. Just guys who stopped worrying about what other folks think and tossed themselves into this insane sport as if it would be the last thing they would ever do that mattered.

Bob Lujiano, probably the most physically affected player in the film, sums up the whole message in a short, mid-film conversation with a group of grade school kids, "I'm alright. That's all that matters. I'm alive. I use everything that I have to get through life. That's what we all have to do, use everything we have." He puts every limitation, every self-imposed boundary that we allow ourselves to use as excuses for not doing what we love or what we need to do, into perspective. Use everything you have to get through your life. Ride safe, fast, and long and play a little Murderball when you get the chance.
Posted by T.W. Day at Sunday, July 05, 2009