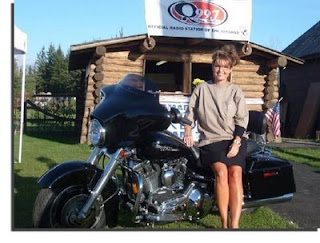 Holy crap! Yet another reason to dislike Harley's. I stumbled on this picture following a Google chase for something completely different. Once I got side-tracked into this subject, I found a couple of other goofy links.
For example, the creeps from Orange County Cycle donating one of their abortions to McCain and Palin at a rally: http://www.youtube.com/watch?v=HUR4m3xh8zk. Those boys can really define and fabricate "ugly." You have to give them that.

This last April, she was again hanging with the Teutul freakshow. While it's true that "there is no accounting for taste," there must be some sort of retribution due for having no taste at all. No? Damn, that's some ugly motorcycle and the guy who is feeling up Palin is pretty creepy looking, too. I have to admit that I really like Palin's LA hooker shoes, though. 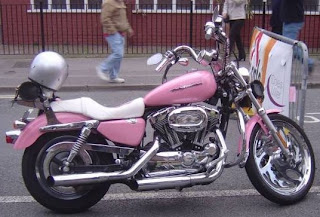 Last, but not least, one of this blog's readers sent me this picture, claiming that it was Palin's personal ride. Say it isn't so, Sarah. No one running for President of these United States should ever, ever be caught dead, alive, or in a zombie state on something as freakin' godawful ugly as a pink Harley. That is a national disgrace. There ought to be a law against subjecting the innocent public to viciously tasteless stuff like that bike.
Posted by T.W. Day at Sunday, July 26, 2009