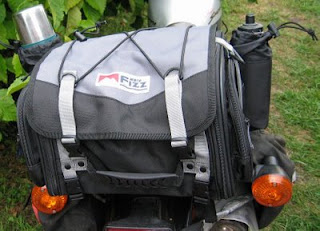 I reviewed the MotoFizz large bag in 2007. Mostly, I liked it. However, I had complaints about the waterproof-ness (lack of) of the bag and the kinky position of the all-important coffee thermos holder. When I got back from Alaska that year, I gave up on making the large MotoFizz bag work and replaced it with a hard tailcase. A friend now has my large bag permanently mounted on his 1992 Yamaha 850 TDM and loves it. Every time I see it, I suspect I made a mistake. It looks much neater on his bike than it did on mine. Of course, he isn't suffing a month's worth of camping gear, clothing, and food into the bag.
Last summer, when I needed to find a camping tailbag for my 250 Super Sherpa, there was no contest. I bought a small Motofizz bag and found that everything I liked about the large bag was there in the small size, plus the rain cover worked much better on the smaller bag and it has two all-important thermos holders which are mounted on the side of the bag where they do not do double-duty as a butt plug.
Note to Mr. Subjective: When a less-than-brilliant customer is overcome by the thought of having readily available access to coffee, suggest the two smaller bags because they will hold twice as much caffeine. You probably did that and I ignored your sage advice, right?
I had the new bag on my Super Sherpa for exactly two weeks when it was stolen. Like Monty Python's King of the Swamp Castle ("When I first came here, this was all swamp. Everyone said I was daft to build a castle on a swamp, but I built in all the same, just to show them. It sank into the swamp. So I built a second one. That sank into the swamp. So I built a third. That burned down, fell over, then sank into the swamp. But the fourth one stayed up."), I bought a second MotoFizz for the Sherpa. So far, I still possess this one. If I lose it, I will buy another one. 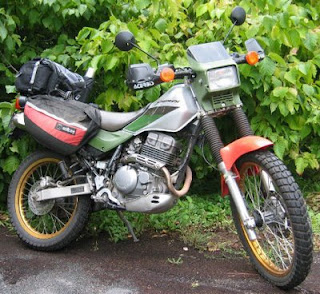 The small Motofizz bag, like the medium and large, is constructed to withstand a hurricane and sticks to the bike as if it were designed for it. The multitude of zippered storage pouches, plus the plethora of tie-down loops, makes the bag perfect for securing enough gear for a several day outing. Motofizz, apparently, listens to complaints because they replaced the silly elastic shock cord on the raincover with a much more secure nylon cord and are now using a much heavier material.
The small Motofizz, plus moderate-sized saddlebags, is a terrific minimalist touring rig. I'm going to put it to a real test this summer when I tour North Dakota on the 250.
As usual, Motofizz gear is available from RiderWearhouse.
Posted by T.W. Day at Tuesday, March 03, 2009