Initially, I was pretty happy with the stock Suzuki DL650 seat. I hadn't planned on swapping it out for a custom unit because I had other, more critical, places to put my money. After a 2 day, 900 mile trip through a variety of roads and non-roads, I was convinced I had "old guy butt" and needed some additional support for my upcoming 2007 Canada-Alaska-west-coast marathon. In the past, it was a no-brainer for me to buy from Corbin, who

se replacement seats I've used on a half-dozen bikes. The last two seats from that company were disappointing, so I was looking for an alternative supplier. I'd heard good things about Sargent from other riders and decided to give them a try for the DL's seat replacement,


A week and a half after placing my money on the table, I received my new butt-platform. It wasn't cheap, which is why I didn't go this route right from the beginning; $399.90, including shipping, for the base-stock, GTX/Black welting, no-frills seat. The shipping container was incredibly light, much lighter than the stock seat, and I wondered if they'd forgotten to put anything other than packing peanuts into the box . I opened the box and found the seat was there, it's just incredibly light. There were a lot of packing peanuts, too. 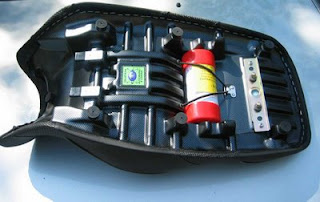 This is a true custom seat, unlike some brands that simply recover the bike's original seat or use bits of the OEM hardware. You can sell your stock seat, because Sargent provides a complete replacement part. The Sargent seat slipped on to the V-Strom's frame much easier than the stock seat. The base is surprisingly flexible and, I suspect, that is some part of why the seat is so comfortable. Sargent puts almost as much thought into the bottom side of the seat as the business end. The documentation for the seat is conveniently rolled into a plastic tube that is bungied into a notch in the seat base. The tube provides a secure, water-tight place to store your owner's manual, insurance and registration information, passport, extra trip cash, and lots more.


Fit and finish-wise, it looks at least as good as the stock seat, even though I didn't buy any of the attention-getting color options and I went for the utilitarian GRIPTEX stock material. Sargent offers a lot of possibilities for the exterior decorating motorcyclist, one of which I'm not. This was one of the first 650 V-Strom seats they'd made and I was warned that it was "near-experimental."

The only things that really matter about a motorcycle seat is how it sits and how it holds up. I found the seat to be very roomy, for me and for a passenger. The platform base is wider than the stock seat, the foam support is stiffer, and that distributes the pressure more evenly across a rider's backside. After a 27-day, 10,000 mile trip to Canada, Alaska, and back, I can say that my Sargent seat was extremely comfortable. 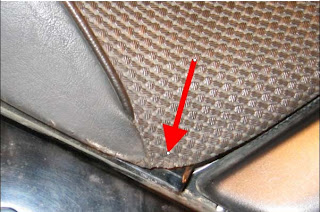 On a negative note, the standard seat material (GRIPTEX, pictured at right) didn't prove to be particularly durable. After three months and 12,000 miles, my seat began to deteriorate, on both sides of the seat, at the point where the seat frame turns upward toward the tank. It looks to me like the frame edges needed to be de-burred to prevent abrasion at this pressure point.
However, the whole lower edge of the seat looks pretty stressed, so it could be the material is inappropriate for motorcycle seats. Maybe that thin, flexible seat frame creates an edge that is too sharp or flexes enough that it makes contact with the frame? Sargent stopped offering the GRIPTEX material, as of July, 2007, so when I returned it for warranty repairs I was offered a different material (out-of-warranty) as a replacement. I declined. Eventually, Sargent repaired the seat by trimming the pan and tucking the excess material back under the edge, hiding the damaged material under the seat.

I had my last Corbin seat repaired by a local boat upholstery technician and it held up for another four years (the original seat only lasted a year) and still looked like new when I sold the bike. I'll just take the Sargent back to that guy if the material flaws become a serious problem. At this point, I'd have to say, "No, I probably wouldn't buy a Sargent for my next bike." Their "one year limited warranty" was a disappointment, at least as far as the torn section of the seat is concerned. This may be another American company that is suffering from too much success? However, I can't complain about Sargent's customer service. The tech was communicative and did a good job repairing the tear and reworked the other side of the seat to prevent a similar failure there.

POSTSCRIPT 7/1/2018: 12 years later, my Sargent seat looks as good as it did the day it came back from the factory repaired. I put another 60,000 miles on that seat and never again reconsidered my initial investment as anything but brilliant. I sold the V-Strom today to a relatively young rider who plans to double the bike's mileage in the next few years. He was as impressed with the comfort of the Sargent seat as me and has written me twice to comment on how well the bike "fits" him. I've changed my mind, the odds are excellent that I'll buy another Sargent seat for my WR250X.
Posted by T.W. Day at Tuesday, March 24, 2009