Motorcycle of the Year?

I think the whole Motorcycle of the Year concept is buggy. What does MOTY mean: the best value, the most expensive, the weirdest, the shiniest, the most innovative, the most/least popular, or the bike that the most folks will probably like/buy? The Kawasaki Versys is one of the few choices I’ve seen in this kind of competition that makes any kind of sense to me. Obviously, from the responses Motorcyclist got many agreed and many did not. The magazine summed up their rationale with "The Versys has an irrational appeal to anyone who's tired of coloring inside the same old lines."

Last year, Motorcyclist picked the KTM 990 Super Duke, which was a traditional, no-brainer kind of choice. KTM is everyone’s favorite Euro-trash manufacturer and a brand that practically no one is likely to put their own money on. The year before that, 3 BMWs got Motorcyclist’s award. A few years back, Motorcycle.com picked the Goldwing and got seriously hammered for the choice. Look through the years and you’ll find Ducati’s, MV’s, Triumphs, and lots of cruisers; all safe bets and all in-the-box choices. This year, webBikeWorld gave their MOTY award to the BMW K1200LT - R1200GS. Talk about coloring inside the same old lines. Rider picked the Kawasaki Concours C14 1400, not exactly an original thought, either. There is some talk on the web that Estonia picked the Yamaha FZ6 for their MOTY. Estonia? I thought that was a mythological country from Doonesbury or Dilbert. Do they have gasoline in Estonia? 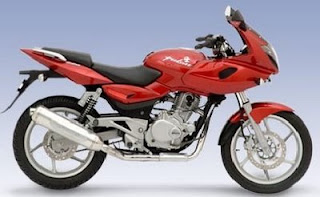 As a creative “outside the box” choice, the Indian Motorcycle of the Year 2008 was the Bajaj Pulsar 220 DTS-Fi, according to a collection of India’s gearhead magazines. That kind of choice would have really set the US motorcycle elites into flames.

While many in the industry have given up on motorcycling as an activity of the middle class, I’m not in that group. In fact, I’m totally disinterested in anything the rich and powerful do, unless they are running for cover when the working classes decides they’ve had enough from that inbred crowd. I’d buy a front row seat to watch that, but I don’t care about the cars they drive, the houses they live in, the politicians they own, or the motorcycles they ride. Any motorcycle that only the 0.01% who own most of the world can buy and ride is an example of a product that has nothing to interest me.

What makes a bike the MOTY? I’d be willing to agree that the bike ought to provide some engineering breakthrough like a new fuel source design. But Americans are working hard to be the slowest to adapt any new technology, so the chances that an electric, hydrogen, or diesel powered bike will make a dent in the market is next-to-zero. If “weird” is the driving force for the decision, there are plenty of stupid looking custom cruisers that have about as much chance of selling enough units to count as being “manufactured” as do some of the weird multi-zillion dollar MOTY choices. 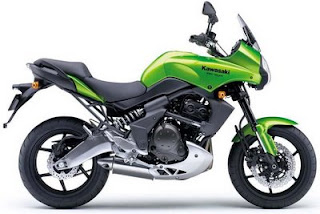 So, back to the original Kawasaki Versys MOTY choice, the $6899 price tag puts it pretty solidly in the middle class price range. 59mpg is downright modern and makes the Versys a little bit practical. The look of the bike is far from conservative, especially with the off-set rear suspension and non-symmetrical swingarm. Some bits of the design are downright ergonomically brilliant, even the console qualifies on that count. Considering the conservative nature of their readership, I’d say Motorcyclist made a pretty bold choice with the Versys. Maybe that’s the real goal of selecting a MOTY? Not the motorcycle itself, but offering some kind of food for thought to the readers/riders to wrench them out of their mental boxes and into the real world?
Posted by T.W. Day at Thursday, October 16, 2008

Email ThisBlogThis!Share to TwitterShare to FacebookShare to Pinterest
Labels: economics, kawasaki, motorcycle of the year, versys