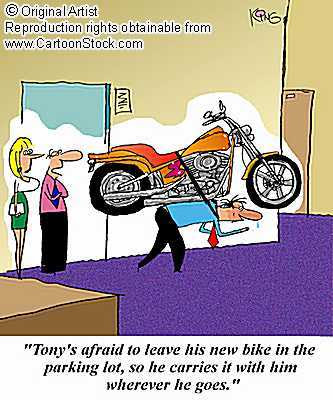 For the last year, I've been unable to avoid hearing about the economic crisis in this country. Every aspect of the media is harping about "crash this" and "crash that" and has been almost since Bush and his crowd took over . Personally, it's been a hard eight years, too. I went into this century thinking I was set for life, if I managed to hang on to a moderate income and didn't buy too many toys. A year later, I was looking to crank up my hobby home businesses into income producers. Still, the impact of living in a failing economy (again) didn't hit me until this week.

As a motorcyclist, there was a depression aspect to life, also. For the first time in my life, I had to worry about someone stealing my motorcycle while I was at work, if the bike wasn't garaged at night, or almost any other time. One of the guys I raced against lived in . His garage was broken open and his bikes, tools, and other personal belongings were stolen. Not long afterwards, something tried to break into my shop, the "Dirt Shop," and the next morning I discovered that a window had been broken before the thief learned that an 18" bike wheel dangling from above the window made an effective set of window bars. He, apparently, also found it impossible to reach my tools with a stick from the broken window. I found the stick lying on the floor and a bunch of tools had been dislodged from their wall hangars. For several years, the dirt bikers I knew all had stories of theft, loss, and anger.

The 80s weren't much better. In , the Reagan years mil-industrial welfare made life fairly good for engineers and bankers, but everyone else had it tough. The helmet law provided incentive for the unemployed and unemployable to snag any helmet (secured or unsecured) from any unwatched bike. I lost a couple of helmets to theft and a couple more to my absentmindedness. Carrying a helmet to class, into restaurants, and everywhere else I went always resulted in my forgetting either the helmet or my gloves or, once, my backpack and . . . somebody snatched it before I could get back to recover it. My fault, I know. Sometimes being a motorcyclist is about as convenient as living out of a grocery cart. Carrying everything but the seat every time you step away from the bike gets to be a pain.

Pat Hahn is convinced I’m a total fool because I lost so many helmets in 10 years of life. He’s probably right. I also lived on my bikes for those years, petal powered and 4-stroked. For ten years, I averaged close to 25,000 miles a year on my motorcycles and 2,500 a year on my bicycle. I almost forgot how to drive a cage, I was in one so rarely. Unless I was hauling family, a kayak, and/or diving gear, I was on two wheels. I had a busy life back then. I managed the manufacturing side of a mid-sized company, was the sole support for a family of 4, finished my college degree at night, and had a bit of a life on the side. I might have been the model of a southern multi-tasker.

Professional bike thieves made life miserable and scary for motorcycle adventurers. A group of friends took a trip into the Desert in the late 80s and awoke to find their bikes had been stolen right out of their campsite. I don't know if I've ever slept that soundly, but I wonder what would have happened if they had woke up to try to stop the thieves? Anyone well equipped enough to be able to snag three large motorcycles from a campsite might we well armed. I got into the habit of using a bike cover, a pair of U-bolt wheel locks (front and back brake disks), and carrying a foghorn can into my tent when I camped. Worst case, the cops would be able to look for a deafened murderer with a bike he had to drag into the pawn shop.

Then, the 90s and prosperity changed everything. All of a sudden, people had jobs and damn few of them felt the need to steal everything that wasn't tied down. It's amazing how many things analysts can find to justify reduced crime and violence when, obviously, having a roof over your head and food in your gut does wonders for "national morality."

I got used to not worrying about things being stolen off of my bike. I am stuck with the habit of carrying my riding gear everywhere, but I don't worry about losing saddlebags, mirrors, the bike seat, or the bike when I'm away from it for a few moments. I am capable of adapting bad habits in a moment. After fifteen years of theft-less life, I stopped worrying about the things I left in the parking garage/lot. I should have known that all those news reports of the next recession/depression were a warning that I needed to revert to paranoia.

Yesterday, I got to work a little late. My class would be waiting at the door when I got there. I had a short day, according to my schedule, and I was a little distracted by the morning's nutty detours and dumber-than-usual traffic. I haven't yet found a cover for my 250 Sherpa commuter bike, so my gear is exposed. That's a dumb thing to do, but it hadn't been a problem on the little bike or my 650 for so long I didn't think much about it as I locked the bars and ran for class, taking off my gear as I went.

When I got back to the bike, about 3 hours later than my "schedule" (as usual). My two month old MotoFizz bag was gone. Usually, I yank it and haul it with my riding gear to my office, but today I thought I'd get away without being paranoid. The asshole who stole the bag didn't bother to take the mounting straps, so he'll probably sell the bag for peanuts to someone who can't figure out how to use it. It didn't have much in it: a pair of cheap waterproof pants, a pair of bungie webs, a plastic waterbottle. The bag was expensive, but the contents were more personally valuable than practically significant.

I didn't lose as much money from the theft as I lost psychologically. It’s a reminder that things have changed, again, for the worse. One of the worries in riding a small bike is that the bike, itself, is easily stolen. is about as insecure a city as I’ve ever lived near and there really isn’t a safe place to park anywhere near where I work. The garage is unmonitored and the motorcycle parking is not visible to the bored and braindead attendant. The school’s lot is equally invisible to responsible eyes, but we’ve had a recent rash of bicycle thefts right in front of the receptionist’s desk.

At the least, I need to find a bike cover that wraps up the little dirt bike so that the majority of thieves will pass it by for a more sure thing. At the most, I’m considering adapting an old defib unit to deliver a 700 volt “warning” shock to anyone who touches the bike. If you see anyone wandering the streets of with a small MotoFizz tailbag. Give me a call and I’ll remove that person from the streets. I figure one good deed deserves another.