Face-Planting Across the Ages 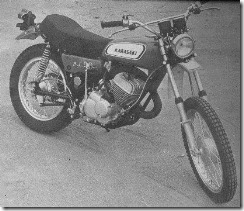 It was spring 1971 and I was well on my way into parenthood at 23 years old, a trade school dropout, living in Hereford, Texas and working 80-90 hours a week at $3.25 an hour servicing the electronic scales on cattle feed trucks. What a life! One of my new friends at my new job turned me on to a deal on a 1970 Kawasaki F5 Bighorn 350. It didn’t take long and, if I wasn’t stuck behind the wheel of the company Chevy C10 pickup blasting my way from one feedlot to the next, I was on that motorcycle. It was my first 2-stroke and the first bike I seriously tried to prep for off-road racing. 28 raging horses with a rotary valve fueled motor, a 5-speed transmission, electronic ignition, aluminum wheels, Hatta forks (at least 3” of travel), lime green paint job, and . . . lights. I don’t think Kawasaki advertised the weight. Maybe metric weights and measures numbers don’t get that big. If it was less than 400 pounds, wet, I’d be astounded. 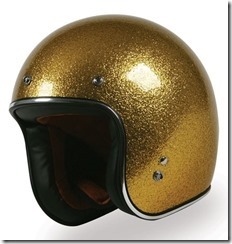 My last gasps of freedom before becoming a father and really needing to rack up overtime at work would be two races: the Canadian River Cross-Country Race and a state series motocross in Dalhart, Texas. The Canadian River race was first and I was “preparing” for that race by blasting across the Texas plains on some friend’s property every spare evening could get away from work. Helmets were optional at most Midwestern 60’s motorcycle events and I had one, a gold metal flake open face unit just like the one in the picture at left. But I often took it off when I got where I was going because riding off road was “so much safer than being on the highway.” Everybody knows that, right? It, honestly, wasn’t much of a helmet and the only reason I owned it was because the rancher who sold me the motorcycle included the helmet. When I arrived at the field where I often practiced riding fast, I would sometimes take off the helmet and stick it on a fence post to be picked up when I got back from playing racer.

One weekend afternoon, I snuck out of work and rode my Kawasaki to the practice field and for whatever reason I popped the gate loop, rode through the gate, reattached the loop, and headed into the field with my helmet still on my head. I rode around the field for a long while and after I tired of going fast, spinning around in dirt-bomb circles, and racing down the dry creek bed on the property, I decided to practice jumping big rocks. The Canadian River race was notorious for having rock piles that had to be either ridden over or you had to drag your bike across the rocks or take the long way up the river bank and back down, hoping you didn’t miss a check point in the process. Some of those river banks were a long trip up, around, and back down. If you could do it, hopping over the rocks trials-style was the way to go and I needed a lot of practice if I would be able to use that tactic in the race.

The Bighorn’s 350 motor was an unpredictable bitch. You never really knew what would happen when you opened up the throttle. Plus or minus a hundred rpm at 3,000 rpm would be the difference between flipping over backwards or charging full speed ahead without enough torque to clear a dime under the front wheel. Hopping logs and rocks on that bike required a lot of clutch and throttle work. I was having a pretty good day working on the technique when I suddenly wasn’t. I’d been working a fairly large pointy rock from several angles when I got the full speed ahead torque-less response and slammed my front tire solidly into the rock, launching me over the bars head-first into the rock, flipping over that and landing on my back in a pile of goatheads. I remember hearing something that sounded like gunshot just before the lights went out.

The day I wake up and can’t remember where I am or who I am will be sponsored by the many times I’ve been concussed in my life. This was one of those times.

I don’t know how long I lay on my back in the goatheads, but it was long enough that when I decided to rejoin the west Texas population of humanoids my shirt was covered in blood. I managed to get to my feet, pull the Bighorn upright and swing a leg over it, and sit there semi-balanced for a bit longer until I remembered where I was and how to get out of there. By that time, my lime green gas tank was blood red. I was really losing a lot of blood and I didn’t know where it was coming from. I rode back to the gate, did the unloop and relooping thing, and rode to my friends’ house. I think I was hoping for a hose to clean myself and the bike off and a bandage for my lip. By then, I had figured out that I’d punched a hose clamp bolt (from the toolbag on my crossbar) through my upper lip. I could feel the wind on my teeth while I rode, even though my mouth was closed. It didn’t hurt much, yet, but I suspect it would soon.

I got to their house and, luckily for me, they were home. I freaked them out a good bit; looking like someone had taken an axe to my face. One of the couple was a nurse and she quickly realized that my face needed stiches and she did them right there in their kitchen. Six stiches, I think. While she was stiching up my face, he took a hose to the bike and my gear. About the time the nurse was applying iodine to her handiwork, he came into the kitchen with my helmet in his hands. “Was this from today?”: He pointed to a triangular-shaped hole in the center of the very top of my helmet.

We loaded my bike into his pickup and drove out to where I was fooling around when I crashed into the rock and there was a lot of gold metal flake paint on the point of that rock. I must have been launched headfirst into the largest spearhead in Texas. It was a crappy helmet, but it wasn’t crappy enough to let that rock get through to my skull. That was the first time a helmet saved my life. 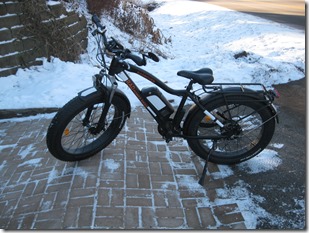 Page forward to December 2018. I’m 70 and the only big moment in life I’m anticipating is my next bowel movement. No kids on the way and no demanding, unrewarding, dangerous as hell job to worry about. My grandson gave me his fairly worn-out eBike earlier this winter and I just got it back on the road.

I bought a new winter helmet, since my usual bicycle helmet is colder than wearing nothing and isn’t really much protection. When the mailman delivered the new helmet, I had a bunch of normal errands to do and a bike ride on a 38oF December day seemed like the perfect excuse to go for a ride. I put on about 12 miles bombing around town and enjoying both the ride and my new much warmer gear (including some Bar Mitts I picked up at Red Wing Bicycle while I was downtown). Just to put some more miles on the battery and see what kind of range the bike had hauling my lard ass around town, I headed out the Cannon River Trail toward the Anderson Center at the west edge of town. I came to the gate that blocks all traffic except fat tire bikes (like mine), cross-country skiers, and hikers and scooted between the bars on to the trail. 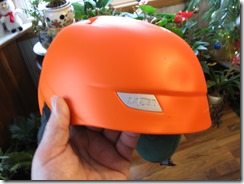 I made it about 30’ on the partially melted slush and the front tire zipped out from under me and dumped me face-first into the road. The slush was soft and slippery, but didn’t provide any buffer between me and the asphalt path. If you look at the middle of the front of the helmet, you’ll see the nice new dent I put in my nice new helmet on its first day on my head. Once again, I was knocked punchy for a few moments, but not unconscious this time. 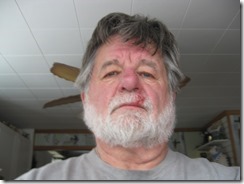 Once again, I punched a hole through my lip, but this time it was with a tooth. Once again, I coated my coat, pants, and bike with blood, but the hole was normal and self-healed after a couple of hours. Weirdly, it leaked saliva all over my lip for a couple of days, but it didn’t swell up all that much and while it pretty much squashed any whistling I might have wanted to do it wasn’t that limiting otherwise. No serious kissing, please. I might have been able to whistle through the hole before it closed up, but I didn’t think to try. Too late now.

I wouldn’t have been out there on the snow if I hadn’t had the helmet, but I’d have been out there sometime this winter. You just have to ride snow sometime if you are going to live in Minnesota and be a biker. Once again, a helmet kept me from bashing my tiny brain out.
Posted by T.W. Day at Wednesday, December 26, 2018