Merge It or Park It 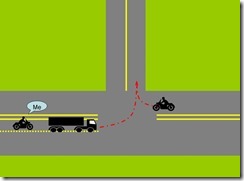 A big cruiser (a full bagger with a reasonably geared-up rider) and a semi loaded with turf approach a T-intersection from opposite directions. The cruiser is making an easy right into the T while the semi has a turn lane and will be crossing lanes after coming to a near stop. The cruiser should reach the turn at least one-hundred feet before the semi begins to make his turn. How do you think this plays out?

Other than me following the semi through the intersection, there is no other traffic in sight. The semi approaches the turn and comes to a complete stop. The cruiser slows to a walking pace before entering the exit lane and, eying the semi, comes to a complete stop at the end of his merge lane. If he got off his hippobike and walked into the road he'd have beaten the semi through the intersection. He waits for the semi driver to signal that it's safe for him to leave the merge lane. This, of course, forced the semi to come to a complete, totally unnecessary, stop partially sticking into the incoming lane while the cruiser doofus waddles away. What should have been a mindlessly simple traffic situation turned into something not only ridiculously complicated but was one more demonstration why Minnesota (and the rest of the country) needs tiered licensing and a dramatically more difficult motorcycle license test for any two-wheel vehicle over 50cc. The motorcyclist in this situation was obviously incapable of handling his oversized toy and should have been ticketed for blocking traffic. If there had been actual traffic in the scenario he would have constituted a road hazard.

From my backseat perspective, the whole incident reminded me of a constant irritant that I do not miss from years of commuting in the Cities. Minnesotans do not know how to merge. Personally, I think stopping in an intersection or, worse, on a freeway entrance/exit ramp should be grounds for loss of license. I wouldn't even object to the police firing a couple of rounds into the driver/rider's head to get their attention. As my father used to say, "There is obviously no vital organ located in that skull." The idea that drivers need to have the "zipper merge" explained to them in remedial terms amazes and depresses me. How is that not obvious?

It clearly isn't, though. There are a couple of exercises in the old, 2007 MSF program that require simple merging skills and about one out of one-hundred classes actually manage to get through these exercises without one or seven or eleven backed-up traffic jams caused by merge-inability. The so-called "seasoned rider" courses are no exception to that statistic. People who have called themselves "riders" for decades simply come to a dead stop when faced with 5mph oncoming traffic (even when that traffic is another motorcycle in a parking lot exercise) and the resulting confusion is comical in a parking lot and suicidal on public roads. As I have asked thousands of times, if you can't merge competently what makes you think you are capable of safely drafting/tailgating?

A few years ago, a rider and fellow MMSC/MSF coach remarked that he'd seen me "aggressively" getting into northbound downtown I35E traffic, as if merging at the end of the entrance lane at traffic speed was impolite. The implication was that I had somehow committed a faux pas in "jumping the line" of traffic some distance above his stuck-in-traffic position. Talk about Minnesota passive-aggressive. Guilty as charged. When I merge, I want to be moving at the prevailing speed and as near to the end of the merge lane as I can get. Commuting is not about standing in line politely waiting for some moron to hang up his damn cell phone. It's about getting to work or home as quickly as possible. If you can't figure that out, you have no hope of comprehending filtering and lane sharing. The day a semi beats me into a T-intersection from the cross-traffic side, even on my 250 dual purpose bike, will be the day I hang up my helmet and buy a convertible. If you are not going to use your motorcycle's superior acceleration, braking, and maneuverability in a simple merge, what would make you think you can use those qualities in an actual emergency? Trust me, you can't and you won't. I've seen that kind of incompetence demonstrated on a regular basis and it amazes me that anyone that impaired would want to risk their life and limbs on a motorcycle.

Back in the 1970's, I visited Chicago from my home in Omaha, for a trade show. My business partner and I were driving a rented panel van, loaded with audio equipment, and we were both small town guys blown away with the Big City. At the first stop light we encountered in the city, when the light changed I was pleasantly surprised to see all of the vehicles started moving together. A couple of lights later, a distracted driver didn't hit the gas when the light changed and the vehicle behind him simply pushed the semi-conscious vehicle into the intersection until the driver assumed marginal control and caught up with traffic. Like most of the US, Chicago is dumbed-down and distracted, today. Vehicles leave intersections connected by invisible 100' ropes, as one of my readers described driver awareness, in every city I've visited. Autonomous vehicles are going to solve this problem for cagers, but motorcyclists are forever going to be on their own. It is hard to imagine how this is going to play out in some way that provides public road access for motorcycles. At least until we are forced into recreational vehicle status, we ought to be merging competently. If nothing else, out of wanting to exit the scene gracefully.
Posted by T.W. Day at Monday, September 10, 2018