The Geezer with a Grudge Columns
(Originally published in Minnesota Motorcycling Monthly Magazine.)

All Rights Reserved © 2015 Thomas W. Day
If you didn't know me you might suspect the title of this essay is saying something about my dislike for good 'ole Mommy Nature. That's not the case, of course. I'm a certified/certifiable tree-hugging, semi-environmentally-conscious guy and one of the many reasons I continue to call Minnesota "home" is the spectacular abundance of live-and-in-color nature we have here. However, I would rather not impact more than fresh air, the occasional rainstorm, and the more frequent hoards of bugs while I'm riding my motorcycle. 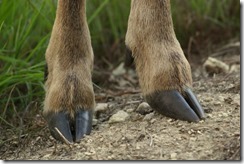 On top of my list of nature's gentle creations that I particularly try to avoid are deer ("hooved-rats" or whatever insulting nickname you've given these moving targets). Over the years and miles, I've developed a few tactics that I like to think have contributed to my survival while riding through some of the country's densest deer populations. I'm not claiming that luck hasn't played a terrific part in my avoiding death-by-fur-ball, but I do think some of the observations and statistical tactics I've collected, developed, and practiced have helped. I'm going to try to pass on a few of these in this article and I encourage our readers to object to, add to, or refine anything I have to say here.

First on my list is practicing braking and swerving skills on a regular basis so that I have the tools necessary when I need to make a major maneuver or apply my motorcycle's braking system near the limits of traction, braking horsepower, and stability. When I talk about this in my MSF courses, I suspect most of my students think I'm either joking or exaggerating . . . but I'm not. While all of my riding skills are far from perfect, I think I have pushed my ability to haul my motorcycles to a stop harder than anything else I know about riding. That would be, mostly, because it's easy to practice using the brakes well and often: at every stop light, stop sign, or any other time you need to bring your bike to a standstill. Use both brakes correctly and precisely and you'll be ready to do something with those skills when you need them.

Watching deer cross the road in front of my house, I've learned that deer travel in groups, predictably. I don't know if I've ever seen a single deer in our neighborhood. The most common group number appears to be four, but three through six has been the regular pattern in Red Wing. So, if you see one: assume three more and make your speed appropriate for threading several animals in the near future. Don't be a stupid as a deer, speeding up in the insane hope that going faster will reduce the chances of impact makes you into uncontrolled prey.

Now this tip is purely my own statistical analysis and personal observation. There is no real science, other than observation and experience, to this piece of advice. On two lane roads, travel near the middle of the road as often as is practical. In the MSF's BRC, we break a highway lane into three sections: left, right, and center. During the active time for deer (and at night) I believe that you can statistically improve your odds of either chasing the deer out from the edge of the road and into your path or give yourself a little more time to avoid deer coming from the near (right) side. By sacrificing a little margin from the left side of the road, you can create a little space and time for yourself hugging the centerline. If the road is crested, you even get a slight line-of-sight advantage into the ditches from this position. There is no science to this. I haven't read any studies that prove or disprove my theory, but the number of times I've had this tactic work for me is way into the hundreds, so it might work for you, too.

This tip is useless for Iron Butt'ers, for for the rest of us it's just a minor sacrifice. When it comes to suddenly-appearing 100 pound animals with no traffic sense, your time to evaluate and execute road hazards is a fraction of a second. With that in mind, my advice is don't ride at night. Once you're riding on your lights and intuition, deer are unavoidable.  You just don't get enough warning from your headlights. Worse, the damn headlights often paralyze deer right in your path of travel. If you are stuck riding at night, stay on the biggest road you can find, well-lit freeways are best, stick with traffic as much as possible, and slow down. Trying to make up time when your sight-line is only a couple hundred feet is close to suicidal.

Implied in some of my other deer-avoidance advice is buying time and space and that almost always means modifying your speed. I'm going to repeat this last piece of advice, since I think it is the real key to surviving deer encounters. Speed kills, especially during deer prime-time and those long hours of poor-visibility. When your lights and line-of-sight are limited, you have to make practical accommodations for what you don't have and set your speed appropriately. It's impossible to make up time ridding in the back of an ambulance, so consider that possibility when you are hauling ass through tree tunnels at dusk.

Be realistic about your attention capacity. It's one thing being on a short ride through a few of Wisconsin's letter roads and another being at the tailend of a 12,000 mile, month-long trip. If you are daydreaming, you are not scanning the edge of the road for potential moving obstacles. The moment you stop watching for Bambi will be the split-second you needed to avoid her. If you are tired, bored, or distracted, you are a moving target. The idea is to be the shooter not the target. Motorcycling is not a spectator sport. You don't get to enjoy the scenery until you are stopped.