When I was young enough to still have a little of that "magic and rubber" thing going for me, motorcycling was just about to hit its first economic snag (at least in my lifetime) in the early 1970's. As a Texas friend once told me, "Back then the moon wasn't born yet and the sun was a little tiny thing barely putting out enough light to read by on a summer afternoon." When I used this picture as my Facebook Profile Picture, I got more than a few inquiries asking "when, what, where, and how?" 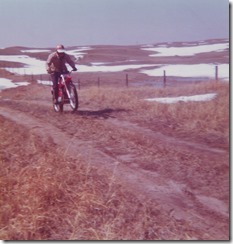 So, for the when I was 26 years old, father of two, sole support of my family, going AGAT for the time with armored denim overalls, a Fury open face helmet with a snap-on face shield and Scott goggles, Justin roper gloves, Malcom Smith/High Point ISDT enduro boots, and a kidney belt. Today, all that sounds a lot like riding naked, but it was geared-up for the day. I was as fearless then as I would ever be. I drove a 1970's Ford E100 Econoline van an average of 100,000 miles a year covering a service territory from North Dakota to Kansas and Iowa to Colorado. The truck housed a work bench and cabinets holding at least three-quarter-ton of equipment and parts. If I had ever come to a sudden stop, I'd have been instantly crushed by all of that crap tearing loose and shifting forward in a contained avalanche. I was always late to every appointment because my boss couldn't say "no" to anyone, so he promised me in at least three places at once, 100-500 miles apart. My average speed in that truck had to have been close to 80mph because I kept the throttle pegged anytime the coast was clear. Motorcycle racing seemed pretty tame compared to my work week.

The "what" was a 1973 Rickman 125 ISDT enduro. The Rickman was my first real off-road motorcycle, a 1971 Kawasaki Big Horn 350 being the first half-ass off-road motorcycle I'd owned before that. If I were ever to want to "go back" and restore a motorcycle I once owned and loved, this bike would be it. I just pounded the snot out of that little Zundapp two-stroke and it kept ticking like a legendary battery bunny. I raced it in a half-dozen 100+ mile cross-country events, in several years of the Nebraska state motocross series, in a few enduros, and trail rode that bike almost every weekend for three years. When I wasn't riding it, my wife was, until I bought her a brand new 1974 Yamaha MX100. Even then we sometimes argued over who'd get to ride the Rickman. I had tweeked, modified, and engineered that motorcycle for me to the point that it was recognizable at almost any distance. If you knew me, you probably knew my motorcycle. From the solid bars to the custom-canted rear Boge Mulholland long travel shocks to the blueprinted engine ports to the hand formed and welded exhaust, my Rickman 125 fit me like a glove. It was the toughest motorcycle I've ever owned.

"Where" was central Nebraska, probably a little northeast of Palmer, Nebraska. Weekends, I "lived" on limited-access roads between Palmer, Archer, and Fullerton, Nebraska. If I'd been on a bigger bike, I might have been single-handedly responsible for the 1970's gas crisis. As it was, I could ride pretty much all weekend on a tank-full of premixed premium and a spare three-gallon gas can. North of Highway 92 and south of Highway 22, there were hundreds of sandy abandoned roads between the fence lines of ranch land and a little farming. In 1975, some friends and I hosted a 125 mile cross-country race on those tractor-trails where about 40 riders experienced what we took for granted: miles of amazing trails, often crossing the Loop River, but never a single paved road. Two years later, I'd moved to Fremont for my first engineering job and my racing days were over. Once I left driving that truck, racing a motorcycle seemed a little crazy for a guy with a family to support.

"How" is a little confusing. Mostly, I just tossed on my gear and gassed up the bike and snuck out of town (illegally, since the Rickman was unlicensed) via farm roads until I crossed 92 into the trails. Sometimes, the whole family came along and we made it into a regular outing, even camping for a night or two a few hundred yards off of the official farm-to-market roads. I'd built a bike trailer out of angle-iron, expanded metal, and an old car axle, that could hold 3 bikes, two forward and one rear-facing. We'd load up the Rickman, my wife's Yamaha MX100, and my Suzuki RL250 trials bike and ride from early morning until the sun went down. The kids would play at the campsite with the children of friends who joined us and it was one big biker family party.

When I'd first moved to Nebraska, I was introduced to a kid, Mike, with a Suzuki TS250 Enduro by an employee and one of our neighbors, Randy, had a Kawasaki F6 125 Enduro. Those two, eventually, took us to their favorite trails, camping sites, and riding hangouts. When I first started riding with Mike, he'd panic and run when we found a rancher or farmer parked on one of the trails. Since I knew we weren't doing anything wrong, I rode up to there trucks and introduced myself. Mike would always hang back, expecting something awful to happen. Eventually, I got to know a lot of the ranchers who lived in the area. When we came on cattle loose or a busted fence line, I'd play cowboy on the bike and chase the cattle back into the pasture, put up the gate, cobble the fence back together, and stop at the ranch house to let the owners know their cattle had escaped, again. After a couple of years, we got to know the ranchers well enough that they helped with our one and only event.

We were all kids, then. Kids with kids, in fact. Now, we're all old. Some of us are dead. The fence lines have all been brought together and those limited-access roads are no more. Not only can you not go back, you can't even go where we went. 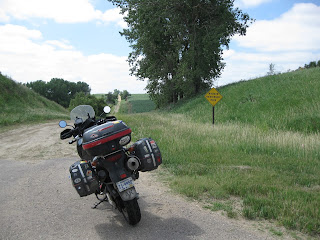 Postscript: I was wrong. On the way to Colorado in the summer of 2016, on Nebraska US Highway 20, I discovered there are still some amazing, rarely traveled, "unmaintained roads" that are absolutely worthy of exploration. They aren't on any state map or your GPS, but they are still out there and if you see 'em, you gotta ride 'em.