One of my all-time favorite books is Philip Kitcher's Abusing Science, a line-by-line scientific refutation of every anti-evolutionary argument written by a wonderfully logical, scientific mind. (Yes, I am agnostic, a firm believer in evolutionary theory even with all of the evidence that humans are probably de-evolving into something less intelligent than lemurs, and a cynic.) I have owned a copy of this book since a philosophy prof recommended it to me in 1984, after an extended debate in his Logic and Critical Thinking class. Using reasoning that is below the standards of Abusing Science, but in my own version of Kitcher's critical spirit, I was inspired to write this rant after reading the 2011 Minnesota Motorcycle Rider Survey Results. I'm not sure whether the authors of that document or I am abusing statistical evidence more enthusiastically. I'm inclined to make connections where only my biases allow me to see the dots. Regardless, I know we both are on infirm ground.

The 1,349 rider survey found that 46% of the surveyed had "basic" rider training, 35% owned "cruiser" style motorcycles, 37% owned Harley Davidsons, 34% wear helmets "never" or "rarely," 48% "never" ride wearing reflective gear, 60% own black helmets, 66% thought that "driver inattention" poses the greatest risk to motorcyclists, 53% rode less than 3,000 miles/year, and 65% were motivated to get rider training to get a motorcycle license. There are so many connections to be made in those statements that I can almost see a sketch of Peter Fonda before I start connecting the data points.

The 65% who got "safety training," primarily to get their license, present an easy target. There is no real age spike in that statistic, either. The over-60 crowd were 10% less likely to have had that motivation with a slight bump in the "increase personal safety" impetus (a stat that has a slight linear rising slope with age). Put this information together with the substantial percentage of cruiser owners and those related puzzle pieces make perfect sense. While cruisers are the status-symbol-of-the-decade, they are a bitch to ride well. "I trailered the bike home, crashed it in my driveway, and decided I needed to take a class" or "I couldn't pass the DMV test, so I wanted to take the test on a bike I can control" is a story MSF instructors hear a few times every class. The driver's license motivation is the worst of all possible reasons to take a safety class. The safety classes teach a new rider how to ride in a swept clean, empty, stress-free parking lot; an environment the student is unlikely to ever see again. A rider with some skills may pick up useful tactics in the basic class, but a first-time rider will concentrate on getting through the class and the test and often leaves with false confidence and a ticket to ride into traffic without a clue how dangerous or complicated that experience will be.

Likewise, the 34% of rarely-to-never helmet wearers are guaranteed to be over-represented by cruiser and new riders; two groups of notoriously low skill riders. In my opinion, that crowd will be a good portion of the 66% who think the big threat to motorcyclists is other drivers not looking out for them. According the the 2008 NHTSA data (http://www-nrd.nhtsa.dot.gov/Pubs/811159.PDF), 81% of motorcyclists killed in Minnesota were helmetless, 26% were alcohol or drug impaired, 25% collided with "fixed objects," and 43% died in single-vehicle crashes. Minnesota statistics similar to data from the rest of the country. As Pogo said, "We have met the enemy and he is us." Even worse, we're not smart enough to know we're the problem and we want everyone else on the road to "start seeing motorcycles" so we don't have to start learning how to ride them. 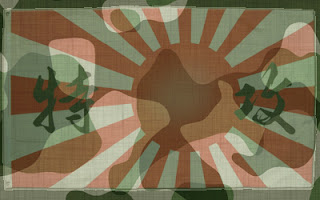 [Someone should make a camouflage headband with the kamikaze logo.]

The number of riders who wear protective gear, visible gear, or take safety training to improve their safety odds is so insignificant that you'd think we're a suicide squad. Maybe all those 1%'ers should scrape off the swastika tats and replace them with the flag kamikaze pilots wrapped around their heads before taking off on a suicide run. That's probably unacceptable because the red and white image would be too visible. You should never commit suicide half-heartedly.

The one "safety feature" the study didn't look at was noisy exhaust systems. Random and constant noise seems to be the only nod to self-preservation that most motorcyclists are willing to make, even though every piece of evidence has found that noisy exhaust systems are a waste of effort. It's a shame that question wasn't asked, just to round out the general impression of foolishness and irrational behavior that motorcyclists take so much pride in. Even the pubic opinion conscious AMA seems to be afraid to buck the "loud pipes save lives" argument.

I know this is a marginally rational way to look at the data from a relatively small, voluntary survey. However, since the data fits my own experience, the best I can do is to say I wasn't surprised by any of it. For me, the pieces fit together exactly the way I expected. Scientifically, that is exactly not how you should interpret data. So sue me. Humans are a marginally rational animal and if we're going to insist on being a foolish species, why should I behave differently?