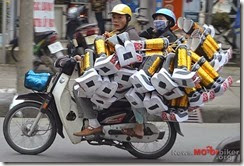 We’re on the world watch, like a disease: Death Rides a Moto. "The subtitle for this article, in case you didn’t follow the link, is “The world's most pressing public health crisis isn't AIDS or Ebola or malaria -- it's a soaring number of motorcycle fatalities. And it's costing developing countries billions.” In Cambodia, for example, motorcycle crashes represent 67 percent of all road deaths; in Thailand and Laos it has reached a staggering 74 percent." As we know, motorcycles are a tiny fraction of US traffic but a grossly overrepresented 12-20% of fatalities.

We’re at a weird time in world history. In the US, we have a whole generation that is abandoning motor vehicles, in general, not just motorcycles. Car sales are struggling, motorcycle sales are stagnate, about the only thing with wheels that seems to be gaining ground is bicycles. But in the rest of the world, “About 95 million motorcycles will be manufactured this year, compared to 80 million cars. China’s growing middle class accounts for nearly a quarter of the global car market — a breathtaking number — but motorcycles and scooters are rolling off assembly lines and out of showrooms at an even faster rate, with some industry analysts predicting sales of up to 135 million units in 2016.” No wonder Honda barely noticed when motorcycle sales in the US crashed at the beginning of the 2007 Great Recession. 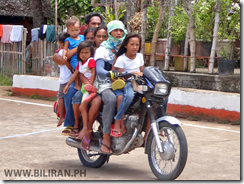 Shades of the US noise and air pollution problem (and solution), “a number of Chinese cities have banned the bikes from all or part their downtowns for a combination of environmental, traffic flow, and safety concerns.” Even where the public mostly likes motorcycles they are finding ways to force people off of two motorized wheels. Why? “According to World Bank estimates, road crashes are costing the economies of Southeast Asia between 2 and 3.5 percent in annual GPD. Loss of productivity due to death and long-term disability (the overwhelming majority of motorcycle fatalities are male breadwinners), the burden on the health care system and property damage are the main factors . . . road crashes cost the Cambodian economy $337 million last year.” That’s pretty similar to the number I’ve seen attributed to the cost of motorcycle crashes in the US.

There is nothing good for the future of motorcycling in this story. It seems to me that motorcycle manufacturers are a lot like gun manufacturers. They’re balanced on a razor thin edge between corporate profits and massive corporate liability. One smart country putting the blame where it belongs and the whole house of cards will come down.