"I put my SV up for sale. My wife and I had a scare on a country road and I decided I'd rather be around or, at least, not in a wheel chair when I have kids. And I realize I'm talking to a great example of the fact that riding can be safe, but it's the things beyond my control that scare me. I have someone stopping by tomorrow to look at it."

So ends the motorcycling adventure of a young man. I meet the 45-60 year old version of this guy in almost every motorcycle class I teach. The "born again" empty nester, recently divorced Baby Boomers who decided they missed something the first time around and, now, want to be a motorcyclist. Honestly, I think the younger guy's odds of survival are better than the older version. We talk about motorcycling being a skill of the eyes and mind, but the fact is it is more than a bit physical and both the eyes and the mind are sharper in youth. It's possible that the improved wisdom of age might compensate for decaying senses and strengths, but I suspect a person whose judgment has substantially improved with age wouldn't consider taking up motorcycling at 55.

As far as the bit about giving up motorcycling out of fear of "things beyond your control," practically everything in life is beyond control. "Safe" is a relative thing. I'm no "great example," either. In my 45 years on motorcycles and 50+ years on bicycles, I've been incompetent, skilled, lucky, paranoid, cautious, and careless. I've busted bones and torn muscles and ligaments on bicycles and motorcycles and basketball courts and working around my house. People break their necks in the shower or on their doorstep. When it ends, life is over in a moment.

There are things you can do to improve your odds, but if riding a motorcycle doesn't push your buttons strongly enough to want to go that route, it's probably not worth the effort. Motorcycling is not for everyone, as much as the motorcycle manufacturers would like you to think it is. 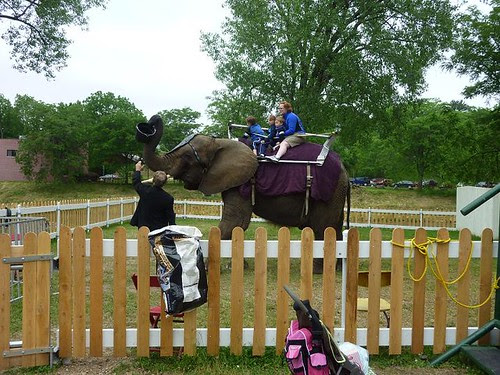 On a short Wisconsin vacation trip with my wife, I watched people on an elephant ride in Baraboo cling obediently to the safety rail of their saddle. "Sir, keep both hands on the safety rail at all times," lectured the girl on the megaphone as a forty-something dad sat, bored out of his skull, at the back of his clan while the elephant trudged down the fenced path. Insurance companies and our national avoidance of personal responsibility has reduced practically every activity to a Big Mommy-sheltered endeavor that would sedate Martha Stewart. Anyone who could fall out of a waddling elephant, fenced into a saddle and pinned by four other harnessed passengers, should not be allowed to reproduce. The gene pool should rejoice if such a person managed to crawl out of that entrapment and fall under the ponderous feet of an elephant.

Motorcycling isn't like that. You can armor up, take a safety course ten times a summer, plug along with traffic whizzing by you as if you were in a molasses-based dimension, and you can still get killed or maimed if your luck doesn't hold. Two wheels are unstable and motorcycles are as rare an occurrence in traffic as unicorns. A tire blows, a wheel bearing seizes, a cager is distracted by a life-changing text message, a tree falls in front of you, and down you go. The reason people ride motorcycles is to get away from the bitch telling us to hang on to the handrails.

Bertrand Russell said, "A life without adventure is likely to be unsatisfying, but a life in which adventure is allowed to take whatever form it will is sure to be short."

Not being bright enough to know that motorcycles are dangerous isn't an improvement from being swarmed in a web of caution. Get on a bicycle in your shorts and flip-flops and take a spill at 5mph, just to test the road rash worthiness of your skin. Crashing sucks and can kill you in full gear. In your birthday suit you're guaranteed to be hamburger. Personally, I've managed to find plenty of adventure inside my helmet and armored gear. You might as well shoot me now as drag me onto that damn elephant, though.