One Stop in Iowa, then Home

The drive through northern Missouri into southern Iowa on Highway 63 is the definition of boring. Miles of industrial farm land occasionally decorated with litter and some of the trashiest towns outside of Mexico. Southern Iowegans do not pick up after themselves. Economically, it is one seriously depressed place and probably deserves to be.

The upside, sort of, was that as we approached Des Moines we began to see a few motorcycles. Granted, 90% or better were dangling-from-the-handlebars Hardly characters making mountains of noise while plodding along so clumsily that I passed a few of them in our camper rig. That was a first. For 8,500 miles the only people we’d passed were parked. Iowa cruiser riders are seriously slow moving and dangerously incompetent. There were a few real motorcyclists on the road, though; sport bikes, adventure tourers, dual purpose, and even a couple totally illegal-to-be-on-the-road outright motocross bikes near the small towns.

Our campsite was Lake Ahquabi State Park, a few miles south of Des Moines. This was, by far, the busiest campground we’d been in since November. There were lots of empty spaces, but at least one area was about half-full of giant camper trailers. Of course, the showers and water were shut off waiting for that magical May 1 bullshit. By now, we’d become pretty adept at sink showers, but I was really beginning to pine for working plumbing that didn’t have an 18 gallon limit or a 6 gallon grey water capacity. Robbye had simply gone numb from disappointment. We decided that “get used to disappointment” should be the theme of several state park systems we’d visited. There was, probably, good reason to shut the poorly designed water system down in the park, though. There was a little ice and snow on the ground, even though the day was in the near-70’s. By 3PM, it was all gone, but there was still a chill in the air and the local television weather report had nasty possible snow-showers in the late-Monday prediction. To be fair, most of the local weather reports we’d heard from October to the end of the trip were pretty screwed up. They rarely replicated the National Weather Service predictions and the NWS was right most of the time. Weather.com was pretty useful, too, but we hadn’t seen WiFi since Pelican Bay. We weren’t going to see any of that high-tech shit in Iowa, either. 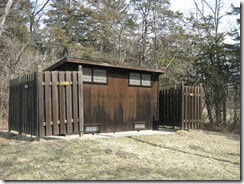 Honestly, the day and night in Lake Ahquabi State Park was pretty disappointing, overall. The outhouse was a national embarrassment. I’ve experienced better maintained facilities in the middle of nowhere Montana. Seriously, on a dirt road between two tiny towns just off of the “Road to Nowhere” and that lonely outhouse beat the crap (literally) out of the Lake Ahquabi State Park. I wouldn’t use that room with your body. At least the park was relatively cheap; $11, I think. Supposedly, “Ahquabi is the Sauk and Fox native word meaning ‘resting place’.” Today, it appears to be the same thing except the people resting are the Iowa state park employees. 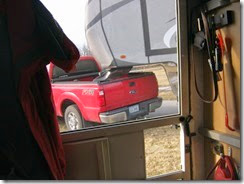 While the campground was slightly busy, we’d found a nicely isolated spot with no nearby neighbors and settled down for an afternoon of hiking and playing with the dog. About the time we’d set out the camp chairs and made ourselves comfortable, this bozo rolls in and tries to camp right behind us. With at least 30 empty sites to play with, this zombie practically backs into our RV trying to hook his 30’+ trailer into the closest site to us he can find. I pulled out the video camera and started filming his maneuvering. Face it, , after all of the pain and suffering this thing caused us, it wouldn’t break my heart if some maroon smashed into the Rialta and his insurance company had to cough up full replacement price. Robbye, on the other hand, went into full Pissed Off Old Lady mode. She was cranking herself up to go tell the bozo all about our desire for privacy and doing it pretty loudly, when he decided to go elsewhere. He really went elsewhere, too. I imagine he trucked up to the campground with all of the drive-through sites that we’d passed on earlier.

All the time we’d been in this campground, the roar and blubber of poorly tuned, underpowered, two-wheel noisemakers had been disturbing the peace. The main highway was 5-6 miles away, but you could hear each one of the state’s many assholes rattling windows on a regular basis. Occasionally, one of the doofuses would get lost or had a need to “show off” his POS Hardly and we’d get a parade of one-to-ten dumbshits blubbering through the campground. There were a couple of kids staying with a large family of campers at the other end of the campground. Around 5PM, they pulled a small scooter down from and started taking turns riding it around the campground road. With all of the Hardly noise in the background, you couldn’t really hear the scooter, even when it passed close by. The kids on the scooter were clearly newbies, but they rode about a 1000X better than any of the Hardly clowns we suffered that evening. Faster, too. 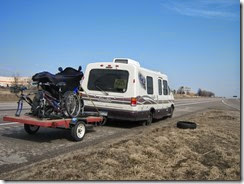 The next day we still hadn’t decided on a travel plan. The options were still 1) go all the way home or 2) find someplace between home and Iowa for one last night of camping. Misfortune made the decision for us. About 2 miles north of Des Moines, the right rear tire blew. Thanks to the pittance AAA pays roadside service companies, AAA was unable to find anyone who could change the tire for me. I had the gear to change any tire, but the right rear one; since the spare comes off from under the truck on that side and with the tire totally gone I couldn’t get the spare off and my backup jack out from under the frame. Good Sam Club was as useless as AAA, giving me a 2 1/2 hour “rescue time” while we were parked dangerously close to fast moving I35 traffic. An Iowa Highway Patrolman came to the rescue, found us a tire service company, and we were back on the road 40 minutes after he stopped to help. 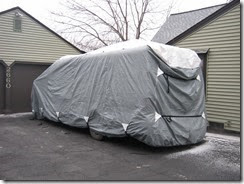 With the lost two hours behind us, we decided we’d had enough of abandoned campgrounds and pointed the RV home. We pulled into our driveway at about 6PM, unpacked the stuff we thought shouldn’t freeze, emptied the refrigerator, pulled the tarp over the Rialta (where it has been for almost three weeks now), and moved back into our gigantic house in Little Canada. Six months of living in 64 square feet was finished. We weren’t perfectly glad we’d made the decision to end the trip, even a few days later. With all of the problems, stress, and expense, we’d had a lot of fun on our first retirement adventure, made some wonderful new friends, and were pretty used to the life on the road. Robbye is officially an RV driver and that is huge if we’re going to do this again. And we are.