I did my first MSF BRC of the year this weekend. The class went well, everyone passed, a fair number of the students are likely to become actual motorcyclists. We had one real incident, though, and it was eye-opening for everyone around that moment. 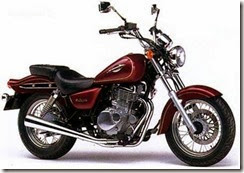 One of our female students dismounted from her god-awful Suzuki GZ250 cruiser-boat, but forgot to put the sidestand down. The bike tipped over, just as her right foot hit the ground, and added its not-inconsequential weight to hers as she fell backwards. Because she was short, the bike put a good bit of weight right at her waist, so she was heading for the ground with mass and momentum. The back of her head struck the swingarm of the bike next to hers. You could hear the “crack!” of the impact all over the range, but close to her it was a little sickening, the sound was so organic. Her husband quickly pulled the bike off of her and she laughed at her mistake, not even noticing the rest of us were looking at her with concern and some shock.

The back of the helmet, an HJC 3/4, was scuffed lightly back of where her right ear would be without the helmet. I can’t believe she would have survived that impact, without the helmet. Absolute minimum, there would have been a serious and scary ambulance run to an emergency room. I think she was the only person in the group who didn’t get the seriousness of her incident. She is a sort of happy-go-lucky kind of person and she made jokes about the fall for the rest of the day. The rest of us commented on how lucky she was that she was wearing a helmet, several times through out the day. I’m not sure a toilet-bowl helmet would have been enough protection for that fall. Some of that swingarm would have come terribly close to going under the edge of those clown hats.

The first motorcycle death I ever witnessed was a kid going about 5mph who struck a car, slid over the roof, and cracked his skull on a curb. This event would have topped that one for irony and disbelief.