For the Well-Dressed Motorcyclist 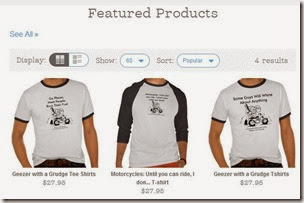 I’ve had a line of stuff available on Zazzle.com for several years and I appreciate the business many of you have sent my way through that company. I have a couple of Geezer shirts and I wear them, often, to piss off as many people as possible, whenever possible. However, as spiffy as the Zazzle stuff is, I have never thought it accurately reflected the real “Geezer attitude.” So, while I have had a good time creating this line of “irritating-wear,” I’ve kept my eyes open for something more appropriate to the intent, purpose, and style of an old guy who desperate wants to be a motorcycle hermit.

In Truth or Consequences, New Mexico, I met a kindred spirit; Jeff Ducatt. Jeff is a crazy-assed hippy artist who has colorized most of southern New Mexico with his tie-dye art, signs, and art (Believe me, without Jeff most of New Mexico would be nothing but large swathes of tan and brown with tiny spots and squiggles of blue and green.)

The shirt in the pictures is a prototype. Fortunately, every shirt Jeff makes will also be a prototype. I have to cough up some setup money for the Geezer logo, but he’s willing and planning on making every shirt an original piece of artwork (That’s bad if you want one exactly like mine, but cool if you want an original.) The text and logo on the front will be exactly like mine. The quote on the back can be any snippet of the multitudes of idiotic things I’ve said in print. For example:

Anything else you’d like printed on the back is fair game. Jeff prints the shirts in two passes, so while the front is going to be replicated, the back can say anything you like. And I mean “anything.” As for colors, you can certainly give Jeff some general directions, requests, and beg for your favorite colors, but the man is an artist and he definitely marches to the sound of his own drummer. For example, I wanted a black, brown, and grey tie-died shirt full of New Mexico petroglyph symbols. There is some black, a bit of grey, and probably some brown somewhere on that shirt, but . . .

If there is enough interest in the shirts to warrant paying for the setup charges, I’ll get back to any of you who write me with a more precise price tag. For now, I think it’s safe to assume the shirts will be around $30 shipped. The more I can order, they cheaper they will be. Price breaks come at quantities of a dozen.

Technorati Tags: geezer with a grudge,clothing
Posted by T.W. Day at Tuesday, March 11, 2014