One of my least favorite aspects of motorcycle safety statistics is the wildly optimistic "miles traveled" numbers that seem to be spouted by everyone from the dreaded AMA to the MSF to NTSA. I do not believe the average mileage traveled by motorcyclists is anywhere near 10,000 miles per year. But how do we get real numbers?

It struck me this morning that we have a ready source of data, CraigsList and eBay. So, I started paging through CraigsList ads this afternoon, copying down the bike year and miles advertised, tossed them into a spreadsheet, and did some calculations.

Observation and experiences are powerful tools. I realize that what appears to be isn't always what is, but I also realize that people making political claims are often motivated to tell less than the truth about . . . anything. One of my least favorite statistics is the "miles traveled" numbers that are used for motorcycle safety data. I simply do not believe that there are nearly as many motorcycles on the road as the industry, safety organizations, and, even, the government claims.

The Kelly Blue Book, for example, posts the following statement, "Obviously mileage will vary from year to year and model to model. A simple guide could be to consider the type of bike you are looking at: If the bike is a sportbike 600 c.c. to 999 c.c., and since these bikes are traditionally weekend only bikes, you can expect to see lower miles, about 3,000 miles per year. Tourers or Sport Tourers usually see a lot of miles, but these are generally freeway miles, between 5,000 to 6,000 miles per year." Those are silly numbers, based on fantasy. NHTA is considerably more conservative with an estimate of 1,943 miles per year for the average motorcycle. I'm not sure I buy that, either.

When people sell their motorcycles, they are pretty much forced to provide credible mileage numbers, so places like CraigsList, eBay, and local newspapers are pretty useful resources. In about a half-hour on two different days, I collected data on 60 motorcycles. So far, my data indicates the average mileage is about 1,425/year with a standard deviation of 863 miles. So far, there are some radically low-mileage outliers. The most annual mileage I've seen is 4,700/year over a 12 year lifetime. My own mileage tops that, but I'm trying to ignore anecdotal data and only collect "for sale" data to keep the information consistent and believable.

I created my own data gathering tool, a Microsoft Excel spreadsheet, that allowed me to enter data that I found in various locations and make some statistical assumptions from that information. Because I'm lazy, old, half-blind, and don't feel some kind of compulsion to do all of this on my own, I' originally posted the spreadsheet on my website for others to play with. A much smarter guy, William Wahby, transferred my Excel sheet to a Google Docs format:(Geezer with a Grudge: Average Mileage) where any of us can add data. If you want to add some bikes from your region, you'll see we've included the following data entry fields for you to work with:


These are all data entry fields. The rest of the data fields -- Miles/Year, Miles Driven, and the statistical analysis fields -- calculate mileage automatically when you enter data into the Year and Miles fields. Please just enter the traditional two-letter State designation into that field. The date format is automatic: DD/MM/YYYY. I'll take pretty much anything for Make/Model. 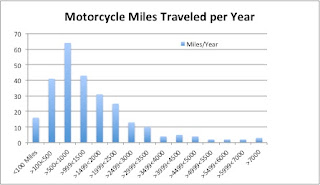 This is the kind of data collection that you'd think/hope NHTSA and the states would be collecting and using for analysis proposes. From what I've been told, they don't bother.  To the right is a charty of what our data looks like, so far. Pretty disgusting, don't you think? One thing this absolutely points out is that the overwhelming majority of riders don't need a bike bigger than 150-250cc. Any damn bike will hold up for less than 2,000 miles a year and how fast do you need to go if you're only going to be on the bike for less than twenty hours a year?
Posted by T.W. Day at Monday, February 25, 2013

Great idea to check craigslist and ebay to get average mileage numbers! If you get tired of merging people's updates to the spreadsheet, you can import your spreadsheet to google docs and let people add their own updates. I grabbed the first two pages of Atlanta craigslist ads (including scooters) and put them into your template, and here's what I got.

It looks like the average mileage on an Atlanta bike is also ~1000 miles. There seems to be an inverse correlation between dollars spent on upgrades and miles ridden, but that's just my general impression so far.

Great idea. I'm going to revise the blog entry to send folks to your spreadsheet. I'll add my data to your pile, too. Thanks.

While I agree that the avg miles per year is probably very low, there are a lot of bikes (unsubstantiated supposition) with big miles that do not end up in 'for sale' adds. They're parted out or privately sold or put up wet in the barn. What do you do with a bike with 50,000 plus miles in 5 years? You might sell it on a forum or in your club or to someone you know. I just don't think these bikes will show up in your data set.

There is definitely some lost data. However, I've sold all of my
big mileage bikes, including several with more than 100k miles in 5-10 years. They are not worthless.

Pat Hahn objected to my approach as imperfect. I could care less about perfection, but I object to the crazy wild guesses we're getting now. I wrote him:

"We can only get the data when the bikes are sold, so why not get what we can? I don't think any data is meaningful unless it gets large enough. I wish I could collect, automatically, eBay and Craigslist's advertiser information. Someone who has some computing capability could probably do that. He ain't me. Honestly, I'm trying embarass the states and/or feds into doing useful work to get credible miles traveled data. I think the fatalities-per-mile guesstimates are grossly optimistic for motorcycles and are being kept dishonestly low to come up with any excuse to allow motorcycles access to public roads. I think that is a wrongheaded approach and one that will bite the industry in the ass when someone produces real numbers.

"A lot of the inspiration for this came from our trip west in January. Excuses aside, if Oregon and California riders weren't out that week, there aren't enough practical riders in the two states to amount to a good weekend of bicycling commuting. Of course, the fact that bicycles contribute to more commuting miles every year than motorcycles is just more proof that motorcycling is just a recreational activity in the US and that is not a good thing. If a bike is just a toy, why should the public bear the cost of access and liability? Bikes like Honda's NC700 are a good step in changing that perception, but pretty much everything Harley/Polaris does is the same old garage candy song. Andy Goldfine thinks the winds are changing. I wish they were, but doubt it."

The cars will continue to win (with or w/out drivers) if two wheeled action is recreation only. For my situation, riding gives me the best of everything. Work needs jacked my mileage over 10,000 miles. If it wasnt for that it would have been much less. Certainly not going to ride around in circles to compete w/the BMW club.

With or without a patch, tattoo, or whatever, you and I are in the same club.

Most anyone who reads your blog is a big mileage guy. We're not the average two-wheeler.

I've added a few charts to the spreadsheet to better visualize the distribution. Three quarters of CL bikes have accrued less than 2000 miles per year. There's definitely a long tail of high-mileage motorcycles being sold, and the bikes with the highest mileage generally look like they've been treated better than the low-mile specials.

Of course the big caveat is that this is all based on ads which actually list mileage. many omit it, possibly because a high mileage number might dampen interest in the bike, or (and this seems to be the case most of the time) because most craigslist ads are crap. This method probably underestimates average mileage a bit, but it seems unlikely that it underestimates it by an order of magnitude.

On a tangentially related note, I've looked at bikes in Atlanta, Sacramento, and Portland, and Portland by far has the most interesting bikes for sale on craigslist. Portland bikes also seem to get ridden more than the others, for whatever that's worth. I should probably add some socal data for better comparisons.

It seems like every state's motorcyclists claim to be the mileage kinds. Minnesota has made that brag for longer than I've been here (17 years). I can't find any evidence that motorcycles are regular or important transportation anywhere in the US.

There appears to be a problem with the max. miles number. Just a glance at the data shows higher numbers than reported in the summary box.

Alright, I get it now. It's max miles/year, not max miles.