Cars and Winter: Can't live without them, gotta move somewhere where I can.

Last Friday night, just as I arrived at my freeway exit, the serpentine belt on my old Escort broke. It sounded like a bunch of ice breaking loose from the car's front end. After I came to a stop at the light, I discovered that the little car could barely turn without the assistance of the power steering pump. It was barely zero Fahrenheit that night, so I put off messing with the belt until Sunday when we were supposed to "enjoy" a blizzard but the temperatures would be closer to freezing. That's what passes for moderate weather in Minnesota in January.

I have to admit that I'm less than patient with cage repairs. I used to love working on my VW Beetles and Toyota Hilux pickup, but I have always hated cars in general and complicated cars in particular. I just don't live where cars live long enough to become vintage, if you drive them year-around. This place isn't called "The Rust Belt" as a joke. It's not funny at all, in fact. Getting the new $30 belt strung looked almost possible, from the start. The new belt is frozen into a tight, unyielding shape that has nothing in common with the Hawking-string-theory mess required to circumscribe the Ford's five pulleys. About an hour into the job and I discovered getting the belt wrapped around the pulleys requires the disassembly of about 1/2 of the right side of the engine compartment, elevating the car to be able to get to the underside of the crank pulley, and fingers twice as long and flexible and hands half as thick as mine. So, now I have power steering oil spilled under the car, engine bits spread out over half of the garage, and I'm no closer to getting the goddamned belt on the car than I was four hours ago. It's cold, the belt won't flex, my fingers are frost-burned from touching frozen metal, and nothing wants to go where it belongs.

While I worked on the POS car, about 6" of snow was collecting on the driveway. The temperature is dropping and I gave up for a day or two. I'm not sure if this job will require patience, more equipment than I own, or just the usual abundance of luck. The damn belt is twisted in the folded-up shape that Gates packages it and it refuses to take the shape required to stay on the pulleys long enough to set the tensioner.

Which brings me to the realization I received this week having done the cost-per-mile calculations for the bikes and car, quickly followed by the misery of working on a semi-modern car. "We gotta get outta this place." For the last 16 years, I've either enjoyed or pretty much tolerated the long cold of the frozen north. Last year was pretty much the end of that. Suffering in the constant cold while I rehabilitated my replaced hip was miserable. Twelve months later, I spent Thanksgiving in the hospital waiting to find out how badly a heart attack has botched up my old ticker. Again, recovering in the cold is a dismal affair. When my wife and explored the Oregon coast this January, I began to think "This ain't the hot setup."

You could bicycle year-around and still take an occasional trip to the mountains for a real winter if the urge struck (I can't imagine that, but it's possible.) I could can the who car-ownership crap and ride a bike or motorcycle for every transportation need I'll ever have. I do that here for 8 months out of the year, but Minnesota mass transit is pitiful and those four months are an overpriced waste of resources. Portland, for example, has a functioning urban rail system and an extensive bus line. The Cities are just now realizing that they and their 'burbs comprise a substantial city and are playing catch-up to the spare standards of the 1970s. I'm not going to live long enough to see a functioning winter transportation system here.

I could go back to an emissions-spewing VW Beetle or an old Japanese pickup, if I didn't have to worry about it rusting out from under me. You can buy a pretty good used Beetle for reasonable money in Portland and they still have floorboards. If I have to own a car, might as well own one that is mostly a 4-wheel motorcycle. The pickup is a likely option, too. It could carry a motorcycle, if necessary, wood for the woodstove, and whatever other crap I have to haul for the 3-4 times a year I need to haul something my bike can't carry. I had a 1974 Toyota Hilux for 8 of the 10 years I lived in California and only sold it because I knew it would dissolve in the Minnesota salt and I couldn't bear to watch that happen after 300,000 miles of faithful service. A kid who read my water meter bought the pickup and planned to drive it to the vintage car show at the fair grounds, once a year, and store it in his dad's barn the rest of the time. It's tough to beat that little motor for simplicity, outside of an air-cooled VW. 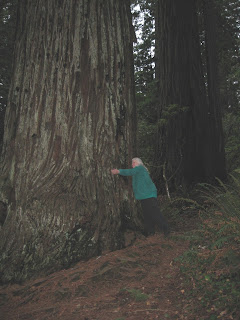 Most guys would have a serious problem pulling off something like this because of their wives. Not me. My wife has hated winter for as long as we've been married, or longer. When I took my first Minnesota job, she was convinced that I was moving us her to force her to divorce me. She is a west coast lady and would sell everything we don't need, pack up what's left, and be ready to hit the road before I finished saying, "Ok, I give. Let's move to Portland." You can see she's a serious tree hugger and she likes to hug serious trees.

It's also possible that this, too, will pass. Every winter for the last five or six, I've burned out on the concept long before the misery was over. When my grandson quit playing in the snow with me, I sorta quit playing in the snow, too. We are part of a wonderful collection of Minnesota communities that I can't imagine replacing anywhere else in the country. By April, I will have forgotten winter altogether and be happily riding the bike to work every day, blissfully unaware that winter is just around the corner. Again. But I won't have to think about my car problems until sometime in late November and that's almost as good as not owning a car.
Posted by T.W. Day

I don't know why modern cars have to be so difficult to work on. It sounds like the cold weather might have been the bulk of the issue.

When Hubby commutes by two wheels year round, there are usually only a handful of days ice or a rare snowstorm that prevents him from doing so.

Come back to the dark side - I mean the ocean side.

We are 89 miles south of Portland and 60 miles east of Newport. If we want snow we are a short drive away, but we like how it stays in the mountains.

We woke to 34 this morning, but the sun is supposed to be shining - after the fog burns off.

Sure, rub it in. This morning it is -5F but the sun is shining, for what little that's worth. I've decided the Escort will be just fine until the garage is above freezing. We're a one car family for a while. If it gets warm fast enough, we might stay one car since I rarely drive all spring-summer-fall.

We have nothing but fond memories of Oregon.

As you likely know, the Northwest is truly a dual-sport paradise... well if you're in an area that isn't gated off in four directions. I'd be happy to show an old geezer with a questionable heart and unquestionable off-roading skills a few memorable dual-sport gems. If it weren't for jobs, I too would be in Oregon. Seattle tries way too damn hard to be a city.

Hey! I resemble that old dude you're talking about. Be careful what you offer, you might have to back it up. Seattle is the home of distracted drivers. Does anyone bother to notice lane markers there? Take care.