A while back, I got tangled up on a users' page in a discussion about pro riders. It went something like this [edited for brevity]:

ME: . . .  So, forgive me if I'm unimpressed by a non-pro rider's "power is like a dog dragging its ass across the carpet stock" comments. Any tool can go fast on a straight section of freeway, but real riders prove their point on the race track.

Squid #2: . . . I'm considered/called a pro artist but I don't get paid for my work. Just because someone races and gets paid for it doesn't mean they actually know what they are doing.

ME: . . . My bet would be that if you put a great rider on a WR250X in a tight supermoto track with all of those poser Hypermotards, Diavels, and SM's, you'd see a WR on the podium. I really want to see a Hypermotard in the whoops or on a big jump. Now that's comedy.

And so it went.

There seems to be a complete disconnect among the Boomerang generation. Anyone who considers herself a "pro artist" but has never earned a nickel as an artist is delusional. The definition of "professional" includes the exchange of money for work. It's easy to imagine that people who are proud of their "navel studies" degree and believe they are adults able to make their own life-decisions while living in their parents' basement might be clueless about the meaning of the word "professional." For the generation that grew up playing MX Action and NBA Live! and imagines that has some connection to riding a motocross bike or playing basketball, I suppose we should excuse the strange belief that being "professional" has something to do with "experience." I, however, am not interested in excuses or ignorance. 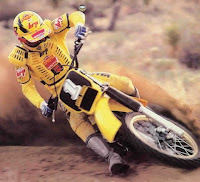 There is no connection, genetically or talent-wise, between professionals and the rest of us. Anyone who can watch Valentino Rossi, Bobby Hannah, Dougie Lampkin, Jeff Ward, Kenny Roberts, or the rest of the world's best and see any connection between that level of performance and their own riding better be ready to put up or shut up on the track. Otherwise, it's just arrogant babble from drunks at the bar.

Having watched a few pros (motorcycle, basketball, engineers, and musicians) close up, I resent the implication that those exceptional people are just "experienced." Their courage, commitment, ability, dedication, and creativity is almost unimaginable among ordinary humans.  The people who finance professional sports don't care about your experience, they want to win. Coming in second is no better than finishing last. You are either the world champ or one more guy who finished behind the world champ. If you are good enough to convince a motorcycle race team to hand you a zillion dollar race bike, you are better than 99.9-something-% of all motorcyclists in the world. Everyone is "experienced," only the best are professionals. And, yeah, they do know what they are doing.
Posted by T.W. Day at Friday, June 10, 2011