By now, it might be obvious to my readers that I'm not a fan of biker gangs.To be politically correct, we're supposed to call these groups "clubs," but I'm so tired of political correctness I'm almost ready to reinstate my grandmother's 1930's pissed-off vernacular. I consider every collection of excess men a "gang" and all of those members to be "gangbangers" and their basic intention to instill fear in the non-members of the group.

To be fair to bikers, any group of excess men makes me nervous: gangs, clubs, football teams, the Mob, military units, Blackwater mercenaries, male support groups, police, heavy metal bands, heavy metal concert crowds, men's movement drum groups, poker runs and charity rides, or just unemployed bums hanging out on a street corner. My wife's term, "excess men," about wraps up the meat in this argument. Men who don't belong to families, have meaningful occupations, feel personal connections to the surrounding community, possess moral values that extend outside of their group, or even a crowd of testosterone charged boys with no adult supervision on a Saturday night. I try to stay clear of anything that resembles a Lord of the Flies congregation. Nothing good will come from getting tangled in their "us against the world" mentality. I, apparently, consistently represent "the world." When those groups are situated in our goofy well-armed country, "dangerous" becomes a grossly understated word. Combine crazy young men, weapons, and a cult-like "mission" and you have the basic formula for social instability.

I know a few people with biker gang histories who resent my implications against the sanity and value of biker gangs. I respect (from a long, disinterested distance) their point of view, but remain perfectly unconvinced. Personally, I'd be happy of there was a Constitutional amendment that prevented groups of single men from congregating in groups of more than two without adult supervision. (None of those "adults" would be permitted to wear uniforms.) The Dave Roth rules of crowd IQ particularly applies to men; "The bigger the crowd, the lower its IQ" and divide the highest IQ in the crowd by the number of people in the crowd to get the crowd IQ. Four Einsteins in a bunch would still be a retarded crowd.

The motivation behind most gangs is the human flaw of mistaking fear for respect. Dictators over the long haul of history have made this error and some have gone down in flames and complete confusion when the people they assumed loved them shot them down like dogs. Most, however, have done pretty well instilling terror for riches and fame. A human life is a short, painful thing and most of the characters who have populated history couldn't manage a Popsicle stand without threatening their customers with injury or death as incentive. So, there is a logical reason for them to band together to oppress competent people who do have lives. The ordinary person makes a useful contribution to the community and doesn't have to scare the shit out of their neighbors to pull it off. However, most people aren't comfortable being surrounded by dangerous, unstable, uneducated men and that makes the average person easy prey for gangs. 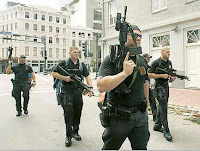 History is jammed full of that story and Hollywood has made a bundle on the fantasy that one skilled, well-armed man can protect the rest of us from whatever flavor the local gang provides. Louis L'Amore would have died a poor farm laborer if that one-against-the-gang story had no basis in society's wishful thinking. For the short term, however, fear is an acceptable substitute for respect since respect requires time and energy to earn. All you need to inspire fear is a well-armed gang. Hoot Gibson, Joel McCrea, Jimmy Stewart, Gary Cooper, James Arness, John Wayne, Clint Eastwood, Bruce Willis, Steven Segal, and even Chuck Norris would be easy pickings for your average US gang; from the inner city Crips and Bloods to Idaho's Aryan Nations.

The other delusion many biker gang members suffer is the fantasy that everyone loves them. As they pass through towns scaring the shit out of the local police and ignoring traffic laws with impunity, gangsters imagine their admirers waving cheerfully at the parade. The reality is that the majority of those people are cursing the bikers' existence and wondering what donut shop is serving as a hideout for the local police?

Gangs of all sorts are convincing arguments for forcible population control. If the gang we hire (the police) can't control the gangs we want protection from, the whole idea of fighting fire with fire becomes obviously hopeless. All that makes for a convincing proof of the "all gangs are bad" argument, but it's mostly useless information and one more reason for suspecting that humans are a evolutionary dead-end.

So, when it comes to gangsters I'm all about avoidance. I don't travel armed. I obviously don't share any of the concerns or opinions of any gang on this earth. We have nothing in common and I suspect we're going to be happiest if we stay as far from each other as possible. (I suspect most people feel that way about gangs. Otherwise, most people would belong to a gang.)  When I was younger I just tried to get by gang parades as fast as possible and put as many miles as possible between me and them. These days, I just pick an alternative route and do my best to be where they aren't. Riding a 250 will humble you that way.
Posted by T.W. Day at Monday, June 13, 2011