This is it, my last pick of ten. So far, my list includes the following 9:
This is a pretty complete list, from me, and I'm running out of motorcycles to add to the group. You'd think someone as old as me would be at the other end of the spectrum; with more favorite toys than room to list them. Sorry to disappoint. Most of the motorcycles I really would have loved to love have been unavailable in the US and I've only had the opportunity to drool at the idea through magazine articles. One thing I've discovered through experience is that long distance love is usually misplaced. Things look better from a distance than up close. So, I'm tempted to say "I'm done at 9."

That wouldn't be fair. In fact, I own one of my 10 favorites and it could be my last motorcycle. This affair started with the first edition, the 1999 Suzuki SV650, which I rode for almost 50k trouble-free miles before trading it for the newer, more multipurpose, fuel-injected version, the 2004 V-Strom. In fact, if you look at the picture of my SV you'll notice that it was heading toward becoming a V-Strom before I sold it. Now, approaching 50k miles on the V-Strom, I'm as happy with the DL650 as I was when I saw the first version of this motorcycle at the Cycle World Motorcycle Show in 2004. 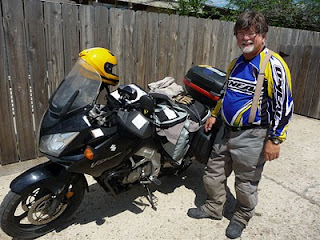 I've already posted dozens of pictures of this bike and my adventures on it on this blog, so doing it again is probably idiotic. But he's a rare shot of the bike in clean condition. If you want to see a few more, go here. Or check out the June 2009 North Dakota Tour blog entries or the August 2008 Nova Scotia tour stuff. Eventually, I hope to do something with my 2007 Alaska pictures and video, but that might be a lost cause. The V-Strom has taken me places I've always wanted to experience. Five guys on V-Strom 650's toured from the tip of Venezuela to Prudhoe Bay, Alaska and, other than damage caused by hitting a British Colombian moose at speed, all 5 bikes and guys made the trip without incident.

The V-Strom 650 is everything I expect and almost everything want in a touring motorcycle. It gets reasonable mileage (43-58mpg, depending on conditions and speed). The stock suspension is almost dirt-capable. The motor is tough, starts easily and reliably at any temperature or altitude, and fairly easy to maintain. The brakes are powerful, reliable, and predictable. It's comfortable for long miles. The V-Strom is capable of mounting luggage that will hold all of my stuff and has room for my grandson or my wife. It handles well on freeways and limited-access dirt roads. The top speed is faster than I need to go and all-day cruising speed is anything between 55 and 95. The headlights are the best I've ever experienced. The stock exhaust system is stainless steel and quiet as a cage.

So, without any question I put this bike on my top-ten list. Some of the other bikes may fall off of the list, but the V-Strom will be there for a long time. It would be disloyal to do otherwise.
Posted by T.W. Day at Monday, December 13, 2010

The V-Strom is so versatile, practical, and affordable that I'm sure they will soon eliminate it in favor of something that is sexy, way overpowered, uncomfortable, and expensive. The marketing department must be throwing fits over at Suzuki with nothing to promote as NEW!

I know what you're saying. Our market is so idiotic and impractical that it begs for the importers to only bring in their silliest stuff. The Yamaha Super Tenere is a case in point. Yamaha makes a 125, 660, and 1200cc versions of that model. We'll only get the 1200cc and in limited quantities at $14k per unit. Out of my price range and above my weight limit.

The Honda CX500 stayed around for a long time, almost a half-decade including the 650 update. That was pretty impressive since it happened during the last mini-depression in the mid-80's. There was talk that the Big 4 would give up on motorcycles altogether back then.

I hear you on the weight limit. I would agree that I don't see the point of the humongous adventure touring cycles, though I suppose most of them never see anything rougher than the occasional dirt road. At least in the places I would want to go adventure touring there is no need for something that can go 140 mph. But apparently hippo tourers must be profitable.

Hippo bikes are profitable in the same way SUVs are an obvious product: low tech, easy manufacturing (compared to more modern and advanced models), and it's a lot easier to sell a big price tag on a big vehicle, even when manufacturing and design costs are lower. From the producer's end, it's a win-win.